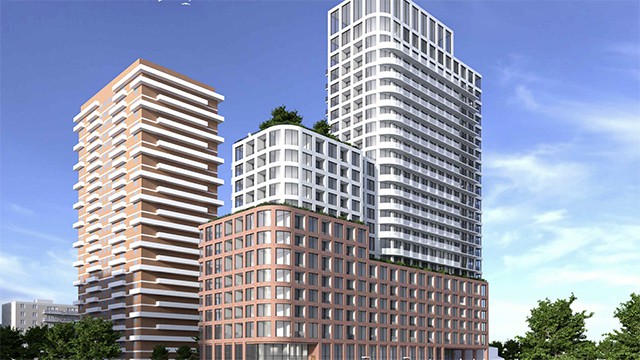 Not everyone loves condos, but Mississauga is preparing to welcome more of them and for good reason–housing inventory is low and condos are (at least for now) the last affordable housing option available to young residents and those looking to downsize.

Earlier this month, the city hosted an information session regarding a substantial proposed development.

The Edenshaw development, if approved, will take shape at 78 Park Street East and 22 – 28 Ann Street in Port Credit. It will be located west of Hurontario Street and north of Park Street East, approximately 50 metres south of the Port Credit Go Station and west of a Metrolinx-owned GO parking area at 30 Queen Street East.

The parking area is planned for future development, and the Hurontario LRT station is slated to open about 100 metres east of the lands that the new development, if approved, will sit on.

The developer is currently seeking an amendment to the current zoning in the area to allow for the construction of a 22-storey mixed-use building with 313 residential units and three live/work units.

The building, if constructed, will also boast four levels of underground parking.

As of now, the current zoning bylaw regulations only allow for an 8 storey apartment building on the site.

According to a recent planning justification report, the land the development could be built on spans approximately .64 acres. As of now, the site is home to five properties, including four detached dwellings and a triplex.

According to a recent Planning and Development report, requests to delist and demolish the dwellings have been received and approved by the city’s Heritage Advisory Committee.

The surrounding area features a mix of apartment buildings ranging from 5 to 27 storeys, with some smaller buildings found throughout the area.

A detached dwelling at 30 Ann Street sits to the north of the property. The report says city staff were advised that Edenshaw Ann Developments Inc. has attempted to purchase the property to include it in the subject development, however, an agreement with the current owner could not be reached.

The city is currently reviewing the application.

Do you think this condo should be built in Port Credit?