How to Protect Yourself From a Coyote in Halton 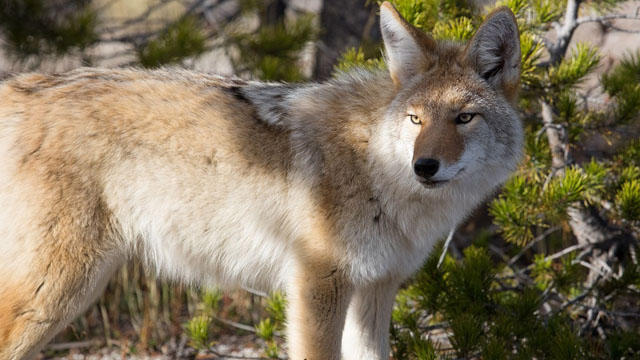 In recent months, coyote sightings have become more and more common across the Peel and Halton regions.

In recent months, coyote sightings have become more and more common across the Peel and Halton regions. As a result, many residents are left with questions about these animals and how to deal with them.

Coyotes are the smaller relatives of wolves, weighing about 30 to 40 pounds, and are about the height of a medium to large dog. Sometimes they appear larger due to their thick coats.

Sometimes coyotes are called coywolves throughout Eastern North America, however, there is actually no scientific sub-breed. The term was coined due to the fact almost all eastern coyotes are a mix of coyote, dog and wolf through generations of breeding.

Coyotes, like all wild animals, are a part of the ecosystem. While they may seem cute on the outside, like all animals in the wild they should be treated with respect. As urban areas expand into their territories, they steadily have been making there way into more developed areas.

This has both good and bad consequences. Coyotes are by nature, predators. They have been known to hunt small animals in neighbourhoods which include, in extreme cases, cats and small dogs. However, coyotes also do a great deal of good for ecosystems, as they hunt animals like mice and rabbits, and as a result, keep the population in control.

This means that co-existing with coyotes is a good thing because a lack of rodents benefits both ecosystems and urban areas.

Coyote attacks on humans are rare as there are only a few documented cases in the entire province. They are far more uncommon compared to dog attacks on people.

This, of course, doesn’t mean an incident will never happen. Mary Smith of Mississauga claims she was recently confronted and attacked by a pack of coyotes while walking her dog at dusk in the area of Etobicoke Creek Trail.

Mary claims the coyotes bit at her pant legs as she fended them off by yelling and waved a tree branch. Pepper spray was also used, but she said the coyotes wouldn’t stop.

Mary claims animal services said nothing can be done and told her: “You have to remember they were here first”.

When asked about the incident, animal services said the main reason nothing could be done was there was no real way for them to prove something had happened. They also claim that the way the coyotes in the story acted seemed very extreme, as most coyotes or coywolves are timid around people and would leave when confronted.

When asked about what was being done regarding coyotes, animal services of both the Halton and Peel regions say they have no plans to do anything extreme at the moment. As coyotes rarely attack humans, and mostly when they do it’s because they have been fed by people and lost their fear, there is no real immediate danger to the public.

Instead, it is better for residents to learn how to live cooperatively with them, as they do other urban animals. Primarily coyotes prefer to have zero interactions with people, but as urban areas expand meetings are inevitable.

When you are confronted by a coyote, always try to keep a distance and remain calm. Do not attempt to approach, touch or feed them. In most cases, they will move on. If the coyote approaches, stand tall, wave your hands, and make a lot of noise.

Slowly back off and throw items near the coyote, but not at them. Do not turn your back or run from a coyote. It’s also best to avoid walking in wooded areas in the evening or night as coyotes are far more active during those times.

For the safety of children and small pets, educate kids on what to do when confronted by a coyote, and keep an eye on your pets when they are outside at night. Also, clean up after your pets as coyotes are attracted by the smells a pet’s droppings leave.

Animal services have a point when they say “they were here first” as human development continues into their habitats, they have nowhere else to go. In terms of danger, they pose no more than dogs or even other people do.

Maybe the key to coyote-related problems is a better understanding of them and learning to live with one another.