How Much Did Mississauga Councillors Make and Spend Last Year?

The 2017 salaries and expenses for Mississauga City Councillors have now been posted on the city's website, and they make for some interesting reading.

With municipal elections this year, there are probably some of you out there wondering just how much it pays to sit as a councillor for Canada's sixth largest city, and what additional perks come along with the job.

Here are some takeaways after perusing the 2017 salary and expense reports.

Salaries of Mississauga Mayor and Councillors 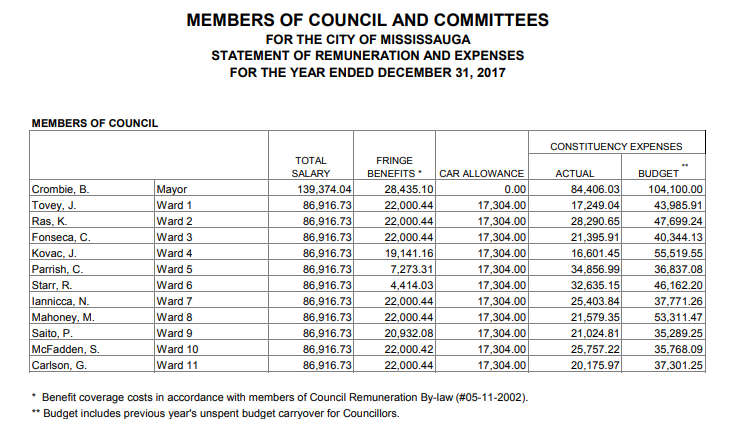 That would make Crombie technically one of the highest paid mayors in Canada. Combined, Crombie receives $187,037.00; by contrast, Toronto Mayor John Tory takes in $188,529.02.

All other 11 city councillors get a salary of $86,916.73. But councillors are also allocated around $17,304.00 for a car allowance, as well as "fringe benefits" and those always controversial expense accounts that get the most attention from the public. Some councillors in Mississauga were reportedly making more than Tory!

It pays to serve the city in other ways

The aforementioned board of directors on Alectra also get paid, as the below portion of the report displays the names of the individuals appointed by Mississauga to serve on the utility board. Chair Norm Loberg gets a $73,000 honorarium. 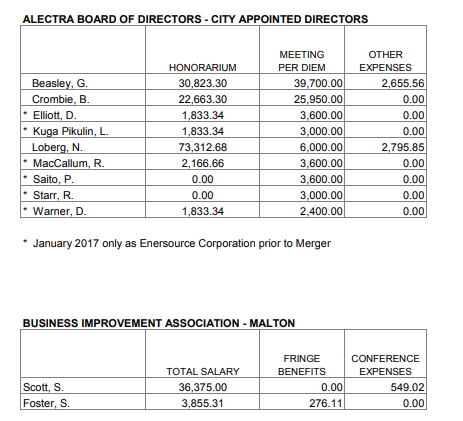 There are also certain individuals sitting on one of the existing Business Improvement Areas (BIAs) who also get paid. S. Scott from the Malton BIA makes a $36,375, three individuals who sit on the Port Credit BIA collect over $40,000 per year, and a J. Fleming makes $58,000 sitting on the Streetsville BIA. 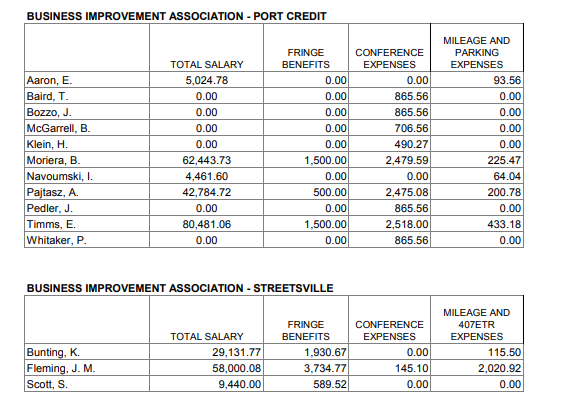 Members of the Committee of Adjustment, who oversee minor variance issues pertaining to individual private or commercial properties, also get a nice salary ranging from $8,000 to $10,000. Other city committees are less lucrative, only paying for parking, conference expenses, or meeting attendance (usually a few hundred dollars).

Unspent expenses get carried over into the next year

Most of us have vacation days that we need to use up in a given year because they don't carry over (you don’t use it, you lose it). However, Mississauga city councillors have the benefit of being able to carry over unspent funds from the previous year's allocated expenses into the following year.

So for example, going over the councillors expenses from 2017, each member of council's annual budget ranges between $26,000 and just under $30,000. However, because all of them had unspent funds from their 2016 expenses, that latter amount was added to the 2017 expense account. 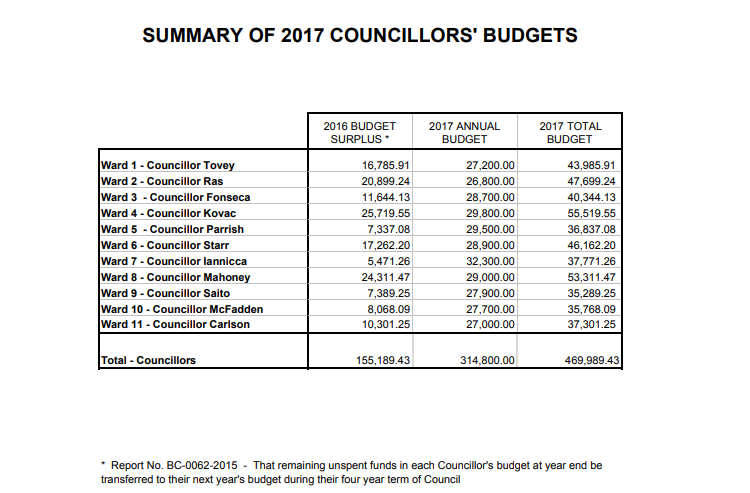 The councillor who saw the smallest increase due to carrying over unspent 2016 funds? Ward 7 Councillor Nando Iannicca, who saw it go from $32,300 to $37,771. This is a good indicator for...

Who spent the most or the least from their council expenses? 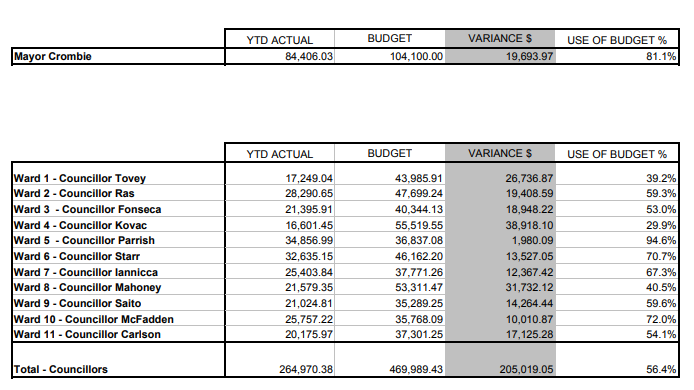 Despite having a budget twice the size he was allocated for 2017 because he carried over unspent amounts from the year before, Councillor Kovac was the councillor who spent the least from his council expense account, having spent only around $16,000 of the $55,000.

The councillor who spent the most of her office budget was Ward 5 Councillor Carolyn Parrish, who spent 94 per cent of her office budget for 2017; the budget was $36,837.08 and her office spent $34,856.99. Some of those expenses include $689.00 for souvenirs in August and October, $2,519.37 for the opening of the Castle Park in Malton, as well as amounts in the hundred dollar range for donations and business meetings.

What exactly constitutes a 'business meeting'?

Hosting a "business meeting" doesn't come free; it's not as though one meeting costs that much, but together they add up to quite a bit. But what does come off as a bit interesting is that business meetings are categorized as line items under "Entertainment and Hospitality" expenditures, and on some councillors reports there is no specification as to what the meeting is about.

Here are two contrasting examples. This is from Ward 10 Councillor Sue McFadden's expenses in January and February of 2017: 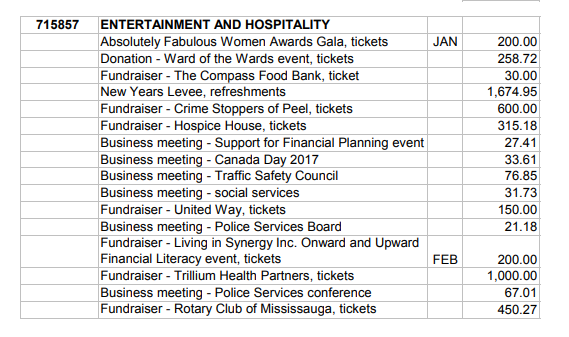 And here is Councillor Iannicca's expenditures for business meetings in December 2017: 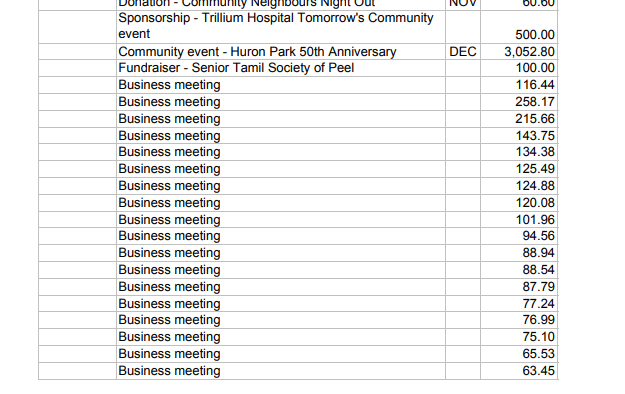 According to Gary Kent, the City of Mississauga's Chief Financial Officer, "business meetings" typically involve a meeting with food or a meal of some type, not for room rentals. There are no standards for how expenses are described (as in the purpose), but each statement is reviewed for accuracy prior to online publication.

In Councillor McFadden's case, she provided some description for what each line item expense was for, even her New Year's Levee where $1675.00 was spent on refreshments.

As for Councillor Iannicca, it looks like he had a lot of business meeting lunches or dinners last December.

You may have noticed that, other than pointing out her salary plus her extra earnings, Mayor Crombie was pretty much left alone in the overview of expenses. I am aware that she has an expense account of over $100,000 and that she did use it. As the mayor who represents the entire city, I as a taxpaying resident expect her to attend conferences, numerous meetings, and (yes) take Highway 407 in order to get to some of those meetings.

A new BBQ restaurant just opened up in Mississauga
The food scene in Mississauga is always evolving so foodies might be happy to hear that a new Pakistani and Indian restaurant is now open here in the city.
END_OF_DOCUMENT_TOKEN_TO_BE_REPLACED