‘How many more bodies need to be found?’: Motion to remove Hamilton’s Macdonald statue defeated at committee 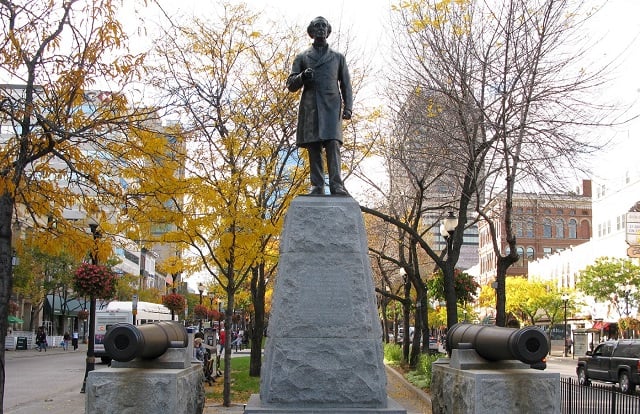 Hamilton city councillors heard it clearly: leaving the Sir John A. Macdonald statue in place would undermine a landmarks and monuments review they unanimously supported.

And yet that’s how they proceeded on Thursday, after hearing one Indigenous presenter say passing the statue in Gore Park “is like a stab in the heart.” And after hearing another ask, rhetorically, “How many more bodies need to be found?”

By a 3-2 vote — with Hamilton Mayor Fred Eisenberger one of the two absentees — the city’s emergency and community services committee defeated a motion that Ward 3 City Councillor Nrinder Nann introduced to put the Macdonald statue into storage. That outcome will go to the full council meeting on Friday morning (July 9) for ratification.

Nann described the statue removal as “pre-work” for the landmark and monuments review. That, by the way, is headed to council for review after a 5-0 vote during the same meeting.

Along with Eisenberger, Ward 14 Coun. Terry Whitehead was also absent.

If the motion is defeated on Friday, the city’s review of landmark and monuments will likely involve engaging the same Indigenous leaders who told the committee that the statue needs to be removed.

Macdonald’s likeness and name has been removed from public spaces across Canada due to his role in the expansion of residential schools in the late 19th century. Remains of over 1,500 Indigenous children have found through First Nations-led searches in the last six weeks.

Jackson said he did not want to make a “one-off” decision that he said would create “a domino effect.” He cited a 2018 quote from Sen. Murray Sinclair that said removing statues was a “symbolic gesture.”

Sinclair, who is Ojibway, chaired the Truth and Reconciliation Commission from 2008 to ’15.

Pauls indicated that she would not vote to remove the statue before the $75,000 review of some 200 landmarks and monuments across the city.

That came a couple hours after a pointed exchange between Pauls and presenter Tristan Maclaurin.

Pauls asked Maclaurin: “Can we wait until we do this $75,000 study?”, referring to the landmarks and monument review.

“How many more bodies need to be found?” Maclaurin asked.

Both Jackson and Pauls cited their background as settlers whose families emigrated to Canada.

Merulla did not ask any questions of the presenters, or speak during the discussion phase before the vote.

Hamilton has about 17,000 Indigenous residents. Jordan Carrier, a Plains Cree woman who helped push the letter-writing campaign, stated that keeping the statue up would set back reconciliation work in the city. Hamilton committed to an Urban Indigenous Strategy in 2019.

The statue has been covered in red paint at least twice since November 2020. It was also shrouded in black fabric ahead of National Indigenous Peoples Day last month.

“The removal of the statue is really low-hanging fruit,” Carrier said in a video delegation. “If the city cannot accomplish this, how can we have any faith in reconciliation?

“The statue reminds me of the abuse my grandparents, aunties and uncles suffered in residential schools, day schools and the child welfare system. It reminds me of starvation policies in my traditional territories.

“It reminds me that statues have been valued more than actual human beings.”

Christine Jone-Davies, a 30-year resident of the city who said she is a “first-generation survivor of the residential school system, said removing the statue until the review is completed would be a good-faith gesture.

“It is a stab in the heart every time I walk by it,” Jones-Davies said. “It is good gesture toward reconciliatory actions that should have already happened … it’s time Hamilton comes to grips with the full weight of Macdonald’s history.”

Three of the 12 presenters spoke against Nann’s motion.

Ken Jones, who said he represented a group called the Forefathers Society, called the motion “naive” and “ignorant.” His camera did not show his face during the virtual meeting, and he was listed as “Earle Jomes” in the meeting agenda.

In a Twitter thread, Hazel Woodrow of the Canadian Anti-Hate Network said that Ken Jones is is a member of a white supremacist group.

Robin McKee, of the Sir John A. Macdonald Society, and Jason Capobianco steered arguments toward pointing out that residential schools predated Macdonald’s political career, and carried on for a century after his retirement and death.

The first was started near Brantford, Ont., in 1831, and the grounds have not been searched there. The last one closed in 1996.

Ward 1 Coun. Maureen Wilson asked McKee, a historian, if deaths of children in care were covered up.

Clark echoed the arguments of pro-removal presenters prior to the vote, but to no avail.

“It’s appropriate to remove the distraction,” he said. “We’re not prejudging the outcome of the report. We’re removing impediments to having the discussion and the consultation with Indigenous peoples. It’s putting the statue in storage so we can have good faith discussions.

“I can’t in good conscience ask them to participate in that review while the statue is still staring them in the face,” Clark added.”We need to put their perspective front and centre.”

Restaurant Reco: One of the best burger joints in Mississauga