How Does Mississauga Feel About the Union Pearson Express? 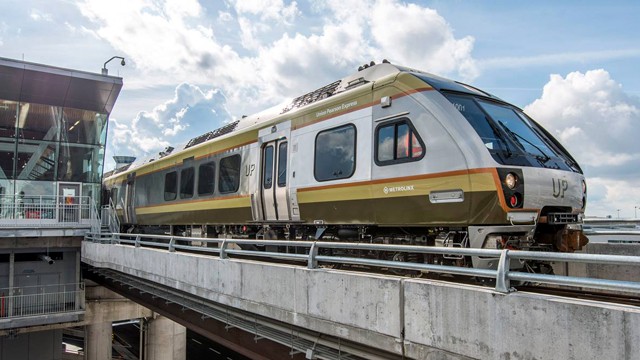 It’s no secret that the embattled but, we think, necessary Union Pearson Express (UPX) has faced some significant hurdles since its implementation.

According to an article in The Globe and Mail, a recent internal report suggests that the train that connects Union Station to the Mississauga-area Pearson Airport won’t break even at its new lower fare and will require a per-rider subsidy indefinitely.

A Globe and Mail assessment of the most recent available data shows that fare and other revenues fell $23.3-million short of operating costs over the first eight months of UPX operation. The result was a taxpayer subsidy of about $46 a rider, considerably more even than the Toronto Transit Commission gets for each user of its Wheel-Trans service. Metrolinx would not speak in detail to The Globe’s analysis, and argued that the subsidy is not normally calculated for a partial year.

Although early figures suggest that ridership did surge after the cost dropped last month to $13, or $9 with a Presto fare card, the average price paid and the total revenue earned since the change have not been revealed. As a result, it’s unclear whether the new fares have left the train on stronger financial footing. It’s a crucial point for a train that was explicitly pitched to break even within three to five years, but one which has been losing huge amounts of money since its launch last summer.

According to the Globe, when the train first became operational, potential passengers balked at the hefty fare and the highly-anticipated project boasted an embarrassingly low number of riders as a result.

Prices have also been an issue.

After pressure from critics, Metrolinx lowered the sizeable fares (initially a whopping $27.50 for a one-way ticket) and while the new prices attracted more customers, the decrease lowered revenues. That said, the numbers that show the train in need of a hefty $46 a rider subsidy have not taken the new fares — and boosted ridership — into account, meaning no one can be sure, at this point, if the changes will result in a sunnier financial picture for the troubled train. That said, the Globe points out that a 2012 report suggested that revenues would be low should tickets be sold at the lowest possible price point, which was $10 (the current fare is $13 or $9 with a Presto pass). The article says that, unless the train can cut operating costs, shortfalls could hit about $20 million a year (so a subsidy of about $5 per rider).

While the numbers don’t look good, it’s important to be mindful of the bigger picture — especially in light of new, ambitious transportation projects hitting the GTA (Mississauga’s LRT comes to mind). For years, it was an embarrassment that Canada’s biggest city did not provide quick rail service from its landmark airport to its downtown core. While Mississauga residents might not use the UPX unless they’re traveling to Pearson from Union (or vice versa), the train delivers passengers to an international facility that has a Mississauga address and could very well be utilized by local residents (and probably is).

Lots of important urban features can be money pits. It would be interesting to see, for example, how much money major highways make for cities. It’s more interesting to note how little anyone talks about that (although it’s easy to see why, as people understand that road maintenance need not be profitable to be necessary).

The train isn’t profitable at this juncture.

But the UPX has grown in popularity since its fares have been slashed and the projected per rider subsidy isn’t quite as alarming as it might have been had Metrolinx not bowed to pressure to make the train more affordable. It is extremely convenient for tourists who might not want to pay for a taxi or navigate city buses. It’s convenient for business travelers — from Mississauga and beyond — who might have to step off a plane and into a downtown boardroom or hotel. It helps commuters who have to catch a flight after an early-morning TO meeting. The shortfall is the cost of better infrastructure. In time, the train could attract more passengers and move towards breaking even.

But even if that’s a far-off possibility, it’s hard to argue that a downtown-to-Pearson rail option wasn’t necessary in a quickly growing region (the GTA) that functions as the country’s main economic hub.

So, Mississauga, do you think the UPX is worth the cost? Do you ride it? Would you?