While some people have claimed that all one needs to do to afford a home in a hot market is give up avocado toast (ah, if only…), most understand that housing has become so astronomically expensive in Mississauga and surrounding cities that not even an avocado-free diet will help all that much.

In fact, a recent Angus Reid report finds that the the proportion of residents made “miserable” by skyhigh real estate values has jumped 10 points since 2015.

“Both homeowners and non-owners agree that the price of real estate in the Greater Toronto Area is ‘unreasonably high,’ and that it may be too late for government intervention to burst the bubble they say is hurting the region,” the report reads.

“These are some of the findings of a new study from the Angus Reid Institute that tracks questions first asked in the GTA in 2015. It finds housing concerns registering considerably higher for most residents of the region today than they did back then. Correspondingly, area residents are now substantially more likely to find themselves in the group ARI researchers deem ‘Miserable’ based on personal experiences with housing and transit, rather than the ‘Happy’ or ‘Comfortable’ groups.”

Not surprisingly, renters are particularly discouraged.

According to the report, more than half (59 per cent) say they are “seriously considering” leaving the GTA because homes are simply not affordable.

Angus Reid found that 50 per cent of GTA residents say they are hoping for at least a 10 per cent drop in prices over the next few years and are actually in favour of government intervention.

The report points out that newly-elected Premier Doug Ford has yet to unveil a housing plan.

The previous Liberal government instituted a Fair Housing Plan that required foreign and speculative buyers to pay an additional 15 per cent tax on homes purchased in Ontario. The federal government also implemented a more rigorous stress test that requires buyers to qualify at substantially higher interest rates than what they’ll ultimately be paying.

The report says that, when asked to name the top issues facing the region, 54 per cent of GTA residents said housing affordability was a top concern. In 2015, only 36 per cent of those surveyed were concerned about housing. 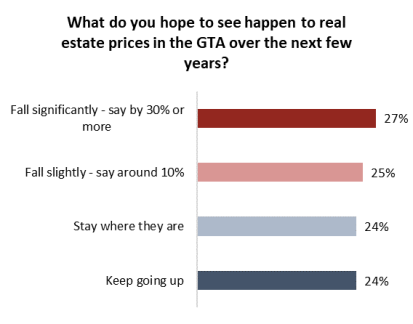 Interestingly enough, respondents are no longer blamining low interest rates for escalating housing prices. According to the report, 42 per cent blame foreign ownership for price increases (although actual data does not support this theory).

For the first time in awhile, residents are far more concerned about housing than they are about transit.

“This surge in concern over the housing file comes over a period that saw median prices continue to climb through early 2017, before a provincial tax on foreign purchasers, new federal rules that make it more difficult for buyers to get mortgages, and rising interest rates combined to reverse the trend in late 2017 and early 2018.” the report reads.

Housing costs are, naturally, a huge concern among younger residents.

The report says that nearly two-thirds (65 per cent) of those ages 18-34 list it among the two most important issues facing the GTA today, compared to 54 per cent of 35-54-year-olds and 40 per cent of those ages 55-plus.

“For GTA residents under age 35, these two key issues - housing and transportation - are distinctly related,” the report says.

“Younger people are more likely than those in other age groups to rely on public transit for their day-to-day transportation needs, and - perhaps as a result - are more likely to report longer commute times.”

More than six-in-ten younger respondents (61 per cent) agree with the statement “I am frustrated with how long it takes me to get to work, but I can’t afford to live any closer:”

The cost of housing is an especially resonant issue with younger respondents. 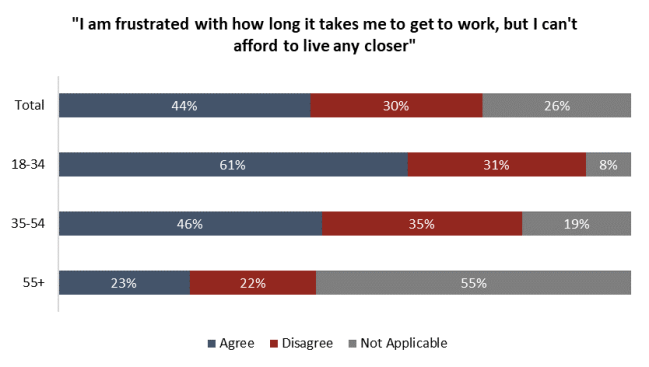 The Angus Reid Institute’s says its 2015 studies on housing and transit in Metro Vancouver and the Greater Toronto Area included a multi-variate analysis that grouped respondents into four segments along a continuum of housing- and transportation-related pain. The four groups were referred to as the Happy, the Comfortable, the Uncomfortable, and the Miserable, and they have been recreated for this 2018 study.

Today, as in 2015, the distinguishing features of the four groups are as follows:

The report says that the sizes of the four groups in the GTA have changed slightly since 2015, with the Happy and Comfortable groups shrinking and the Miserable group growing by 10 percentage points: 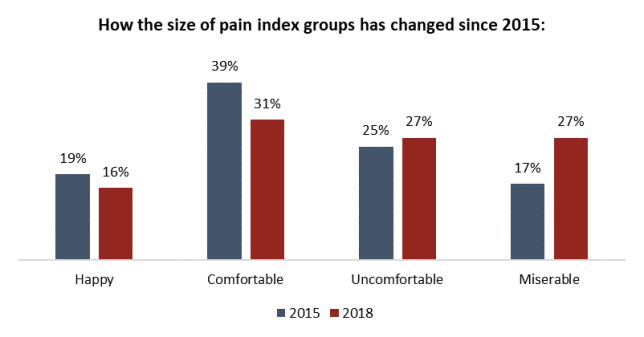 The following graph highlights some of the key areas of disagreement between the four segments: 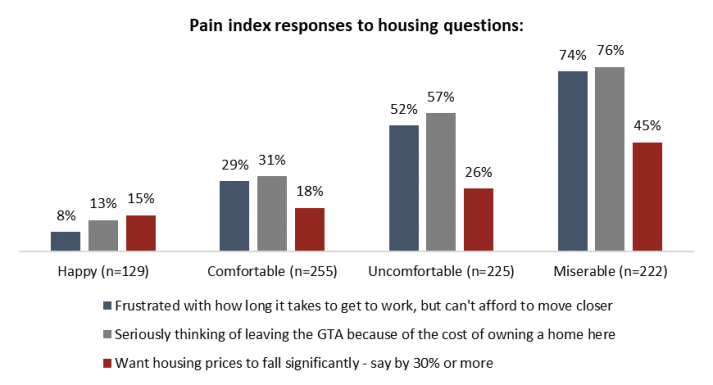 Naturally, the report finds that GTA homeowners view the high cost of housing in the region as a problem—but not when it comes to the value of their own home.

Asked how they would describe the market value of their own residence, the report finds that owners mostly view it as either “reasonable overall,” or “high, but understandable given the area.”

Renters feel similarly about the amount of rent they pay, as seen in the graph that follows.

“As the focus broadens to one’s immediate community or municipality, the perception that housing costs are “unreasonably high” begins to increase,” the report reads.

“Nearly one-in-three owners (32 per cent) say home prices in their communities are unreasonable, and more than four-in-ten renters (46 per cent) say this about typical rents near them.”

Non-owners are even more pessimistic.

Angue Reid says that 67 per cent say residential real estate is unreasonably costly in their community, and this number rises to 74 per cent when considering the price of a home across the entire region: 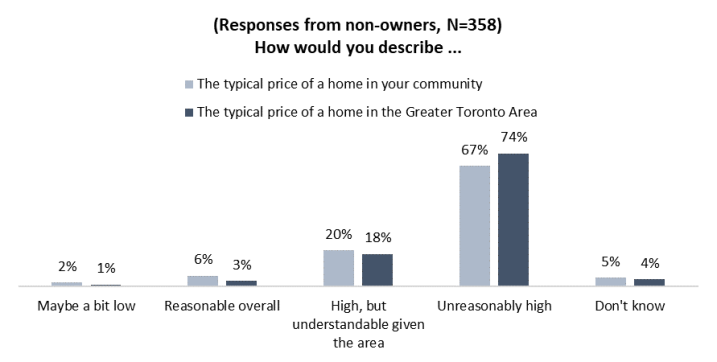 More than one-in-three non-owners surveyed (36 per cent) say they would like to buy a home now, but can’t afford to do so.

“This pain is particularly acute for non-owners who are in the 35-54-year-old age group, some 46 per cent of whom say they would like to buy a home now that they’re in their prime wage-earning years, but still can’t afford to do so.”

As expected, people who already in the market aren’t all that upset about dramatic price increases.

Those who long to purchase a home are, on the other hand, quite discouraged.

Asked whether the high price of a home in the region is benefitting or hurting them, personally, homeowners mostly say they are either benefitting or unaffected, while renters overwhelmingly feel they’re being hurt:

That said, most worry about the impact high prices have on their city.

The report says homeowners are more likely to say high real estate prices are hurting the city they live in (41 per cent) than helping it (33 per cent), and a full majority say high housing costs are hurting, rather than benefiting, the GTA overall:

So, are people hoping for a crash?

“Clearly, the popular consensus in the GTA today is that the high cost of housing - even if it’s benefiting some people at the individual level - is hurting the region overall,” the report reads.

More than eight-in-ten GTA residents (84 per cent) say they are “worried the next generation won’t be able to afford to own a home” in the region, and nearly half (47 per cent) agree with the statement “I’m seriously thinking of leaving the GTA because of the cost of owning a home here.”

“Given this, it makes sense that these groups - when asked what they would like to see from the housing market in the future - mostly say they hope prices come down.”

Overall, roughly half of GTA residents (52 per cent) say they hope prices fall at least “slightly” in the next few years. This includes more than one-in-four (27 per cent) who hope prices fall by 30 per cent or more - essentially a major crash.

Renters and owners have differing views on the situation. 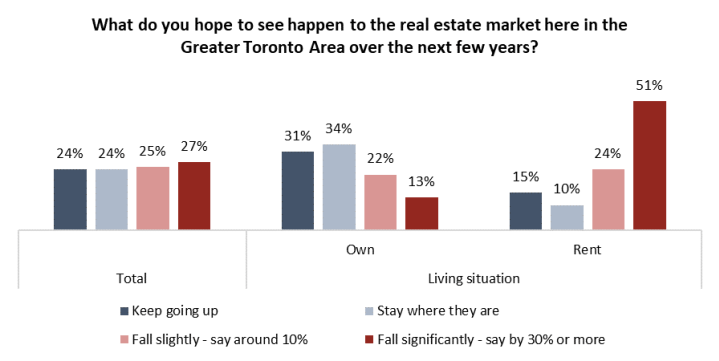 When it comes to specific policies, respondents are overwhelmingly supportive of both the foreign buyers tax and a tax on vacant homes that the City of Toronto has been considering.

Almost three-quarters of GTA residents (73 per cent) say they would support following the Australian and Swiss governments, among others, in limiting the number and types of properties that foreign nationals can purchase.

A stricter limit - which would set a hard cap on the number of properties anyone can own in Ontario, regardless of where they are from - is considerably less popular, Angus Reid finds That said, four-in-ten respondents (42 per cent) say they would support legislation limiting the number of homes any individual or corporation can own in Ontario to one: 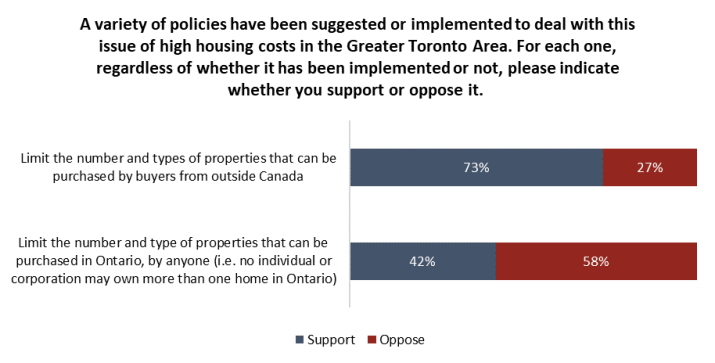 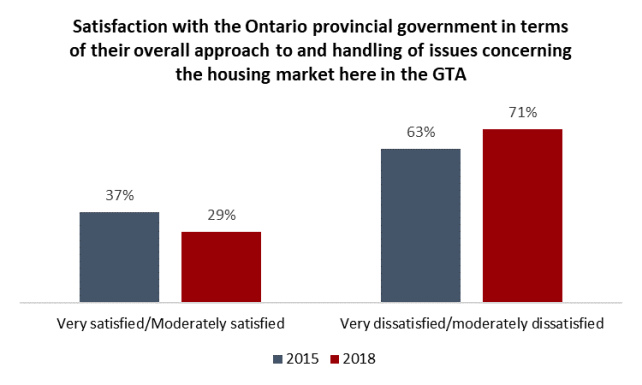 What policies do people support? 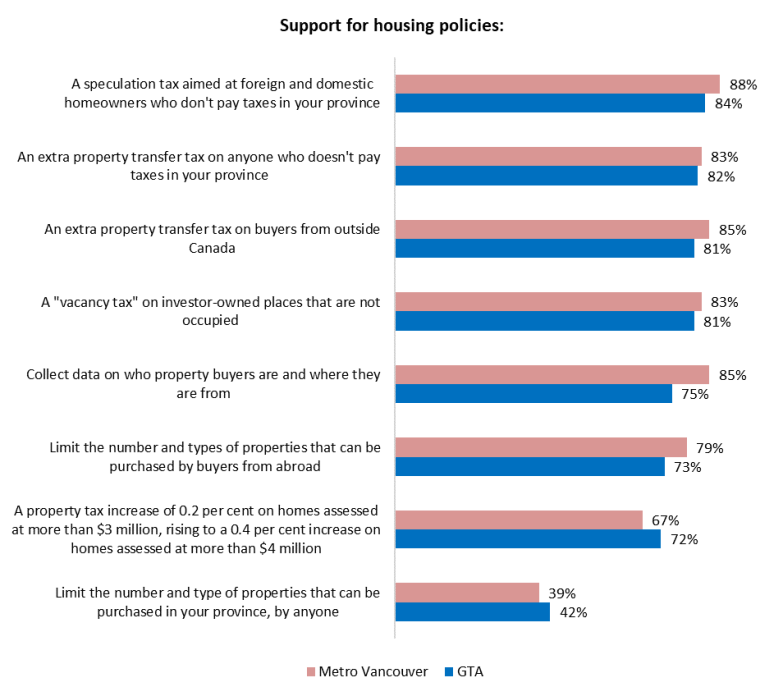 In the GTA, people do credit the area’s desirability as something that drives prices. 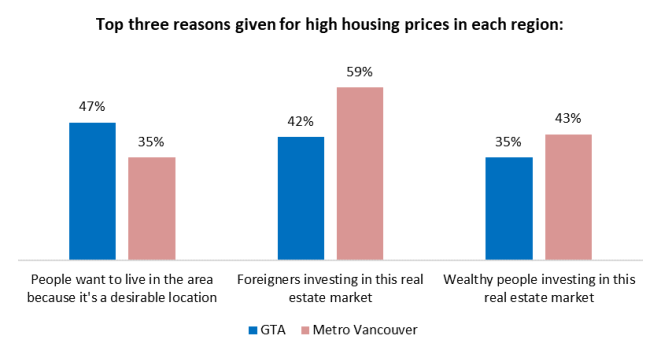 What do you think should be done about housing prices in the GTA?