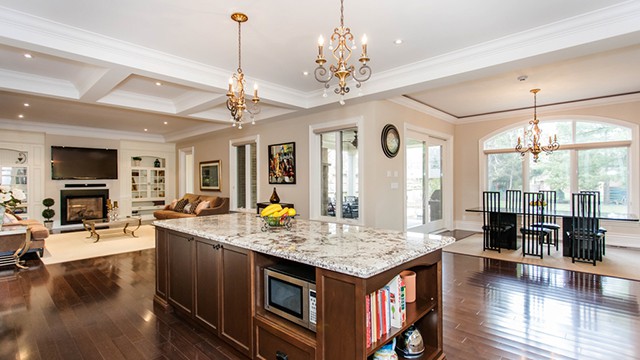 Although the market is still pretty hot, it is cooling down (which is likely great news for prospective buyers looking for valuable properties with slightly more modest price tags).

According to TREB, Greater Toronto Area realtors reported 7,974 sales through TREB’s MLS system in June 2017 – down by a whopping 37.3 per cent in comparison to June 2016.

And although sales are down, listings are up.

TREB says 19,614 new residential listings were entered into the system–up 15.9 per cent compared to June 2016.

“We are in a period of flux that often follows major government policy announcements pointed at the housing market. On one hand, consumer survey results tell us many households are very interested in purchasing a home in the near future, but some of these would-be buyers seem to be temporarily on the sidelines waiting to see the real impact of the Ontario Fair Housing Plan,” said TREB President Tim Syrianos, in a statement. “On the other hand, we have existing homeowners who are listing their home because they feel price growth may have peaked. The end result has been a better supplied market and a moderating annual pace of price growth.”

As far as prices go, they’re certainly up year-over year–but not month-over-month.

As for what’s moderating month-over-month price growth, TREB says the influx of inventory is giving buyers some relief.

“A better supplied market has certainly been a key factor influencing the moderation in price growth,” the report reads. “However, the average selling price has also been impacted by the fact that the greatest home sales declines were for more expensive home types, most notably detached houses. This means the change in the mix of homes sold this past June compared to a year earlier has also had a substantial impact on the overall average selling price.”

Fortunately for buyers, the astronomical month-over-month price increases that were observed in the winter are not persisting into the summer.

That said, prices are still quite high (which is, of course, good for sellers).

TREB says The MLS Home Price Index (HPI) composite benchmark price was up by 25.3 per cent on a year-over-year basis in June. However, on a month-over-month basis, TREB is noticing “diverging trends.”

Following the announcement of the Ontario Fair Housing Plan (which is imposing a foreign buyer/speculator tax of 15 per cent and expanding rent control), TREB commissioned Ipsos Public Affairs to undertake two consumer surveys: one focused on home buyers; the other focused on home sellers.

Highlights from these two surveys, conducted from May 23-29, are as follows:

· 35 per cent of households surveyed indicated that they were very likely (13 per cent) or likely (22 per cent) to purchase a home over the next year – similar to what was reported from the Ipsos survey conducted for TREB in the fall of 2016.
· 40 per cent of likely buyers indicated they would be first-time buyers – a marked decline from 53 per cent in Ipsos’ fall survey.
· 10 per cent of households who said they would NOT purchase a home over the next year said the Fair Housing Plan was the key factor in this decision (one per cent) or a contributing factor (nine per cent).

“The recent Ipsos survey results suggest that home buying activity in the GTA will remain strong moving forward,” said Jason Mercer, TREB’s Director of Market Analysis and Service Channels. “The year-over-year dip in home sales we have experienced over the last two months seem to be the result of would-be buyers putting their decision to purchase temporarily on hold while they monitor the impact of the Fair Housing Plan. On the supply side of the market, it certainly looks as though buyers will benefit from more choice in the second half of 2017 compared to the same period in 2016.”

So, is the government’s plan actually cooling the market?

TREB says The Ontario Fair Housing Plan has prompted some households to put their decision to purchase a home on hold, at least in the short-term. These holdouts include prospective first-time buyers who have more flexibility.

That said, TREB adds that the survey results dealing with likely homebuyers suggest that many households who have moved to the sidelines will return to the market over the next year, possibly after reassessing the type and/or location of home they plan to purchase.

TREB also pointed out that, in terms of foreign ownership, it was right all along–overseas buyers are not dominating the housing market.

“The Ontario government recently released their first wave of foreign buyer statistics, which confirmed earlier TREB research that showed foreign buyers, even in the pre-Fair Housing Plan era, represented a very small proportion of overall home purchases – slightly less than five per cent,” said TREB CEO John DiMichele. “This, taken along with the strong buyer intentions reported by Ipsos, suggests that we will see many households moving back into the home ownership market over the next 12 months.”

As for where the market is headed, no one knows for sure what will happen in terms of inventory (the number of houses on the market could fluctuate in the coming months). That said, prospective homebuyers could be hit by increased borrowing costs, as multiple media reports have indicated that interest rates could climb–and soon.

“The consensus view is that the Bank of Canada will raise its Target for the Overnight Rate at least once in the second half of 2017 and perhaps more than once,” the report reads. “Prospective Bank of Canada increases have already been priced reflected in Government of Canada bond yields and posted mortgage rates, at least to some degree. Advertised discounted mortgage rates, however, remain at or near historic lows.”

Taking into account both the temporary impact of the Fair Housing Plan and the further impact of higher borrowing costs, TREB’s says its forecast range for home sales in 2017 has been revised downward to between 89,000 to 100,000 transactions.

“While home sales for calendar year 2017 will be down, listing activity will be up,” the report says. “As home owners react to strong equity gains over the past year, plus feelings that price growth will moderate in the future, new listings entered into TREB’s MLS system are expected to increase year-over-year. Look for the total number of new residential listings to range between 175,000 and 190,000 this year.”

It’ll be interesting to see how the market changes going forward.

In the meantime, buyers can breathe a slight sigh of relief, as it appears balance is returning to the market (at least for now).