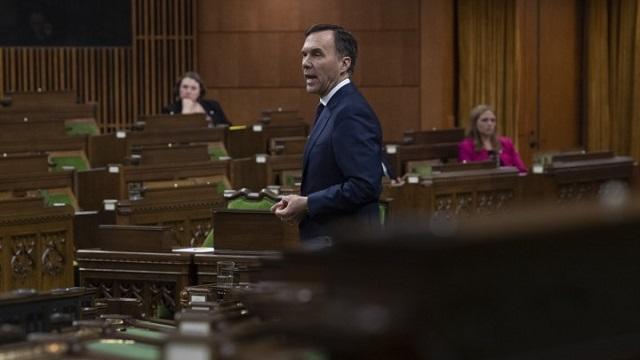 OTTAWA — Canada’s House of Commons is looking at taking its debates virtual as COVID-19 is expected to prevent a return as planned on April 20.

The House recessed March 13 for five weeks to ensure MPs were doing their part to slow travel and prevent the spread of COVID-19.

The all-party agreement to temporarily rise included allowances for smaller numbers of MPs to convene when emergency legislation needed passing.

That happened March 24 and 25 to pass the government’s massive aid package, and another emergency day is expected within the next week to make additions to the aid package.

But with most provinces extending stay-at-home orders and requests well into May, the House of Commons is now looking to have virtual sittings.

Opposition parties all appeared behind the idea, with Conservatives, Bloc Quebecois and NDP MPs all saying they will support the initiative.

“All Canadians are doing their part to prevent the spread of COVID-19, and we are asking them to take extraordinary measures to keep everyone safe,” Rodriguez wrote in his letter to Rota.

“This includes working from home, and only leaving their homes for essential reasons. It is only appropriate that Members of Parliament practise these same measures, and adapt the way that we conduct our business during the time that the House cannot meet on a regular and normal basis.”

Conservative Leader Andrew Scheer said last week he wanted more accountability from the government, including more opportunities for opposition parties to ask questions of the government.

His finance critic, Pierre Poilievre, said Sunday the party is very willing to work with the government to find ways for more committees to be held via phone or video conferencing, or for all of Parliament to meet virtually.

“Conservatives will be fully supportive of any virtual return of Parliament,” he said.

Bloc Quebecois Leader Yves-Francois Blanchet said in his own letter to Rota, that the Bloc has been asking for this kind of initiative for several days and supports it. However Blanchet indicated he thinks any votes should still be held in person, with the smaller number of MPs as was already negotiated in the earlier agreement.

“People across the country are being left behind by decisions the government is making and Canadians deserve a way to make sure they are being held accountable,” Julian said.