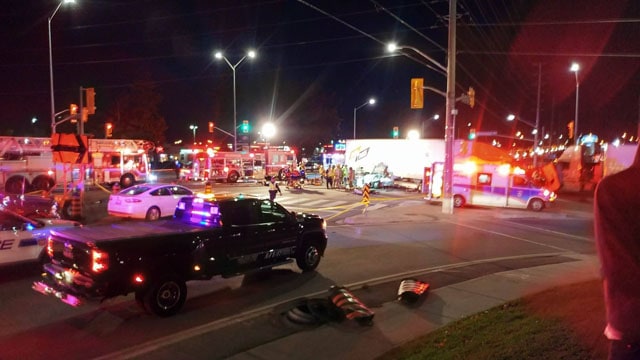 Two people have been killed in a horrific crash in Mississauga.

The collision, which involved a car and a transport truck, occured at the Dixie Road and Aerowood Drive intersection around 7:30 p.m. on Oct 13. Three people, two men and a woman, were in the car at the time of the crash. When police first arrived on scene, the male driver and female passenger were found without vital signs.

The female passenger was pronounced dead at the scene.

Peel Police Const. Mark Fischer told insauga.com that all three occupants of the vehicle had to extricated from the car. The front male passenger was conscious at the scene and was extricated and taken to local hospital. The male driver was found without vital signs and was transportated to hospital as well.

At the time of the interview, the driver’s condition was not known. Now, more recent reports are indicating that he has died.

The intersection and roadway were closed and may remain closed for the next few hours.

The Major Collision Bureau is investigating the tragic accident.

You can see a video of the aftermath of the incident below. Some of the content is upsetting, so viewer discretion is strongly advised.