Houses in Mississauga are not exactly affordable, but recently released data suggests that the average price point in the Region of Peel (which consists of Brampton, Mississauga and Caledon) dipped a little between September and October, even as demand for low-rise houses continued to soar.

That said, it's important to remember that detached house prices alone hit an all-time high in Mississauga—$1,307,832—in August 2020.

"And that inventory is very, very limited."

These diverging markets -- one where buyers bid up prices for spacious homes at a record-setting sales pace, and another where buyers have their choice of downtown condos -- shone through in a Wednesday report from the Toronto Regional Real Estate Board (TRREB).

As far as Mississauga goes, real estate website and brokerage Zoocasa says that home sales climbed 13 per cent, with 943 homes sold in the month of October.

"Within the Region [of Peel], the city saw the greatest increase in new listings at 1,665 homes hitting the market but also ended the month with 1,527 active listings," says Jannine Rane, Zoocasa's head of communications.

The average home price in Mississauga rose by 8 per cent year-over-year to $878,276. Sales by property type were split between semi-detached and townhomes, at an increase of 40 per cent and 36 per cent, year-over-year respectively.

Detached houses followed with a 14 per cent increase in sales while condo apartment sales fell 5 per cent year-over-year. 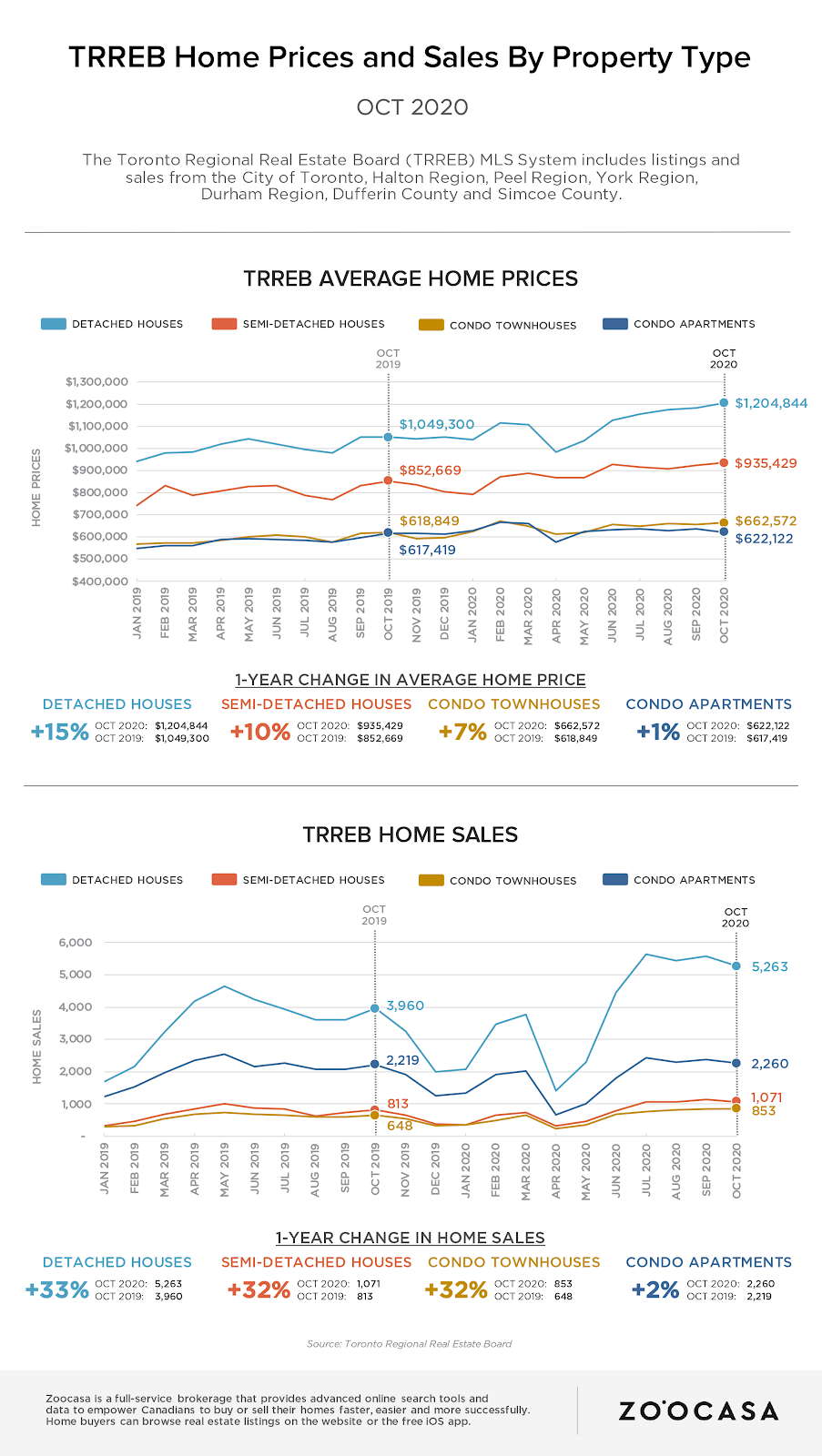 In Peel, overall prices are slightly down month-over-month but up year-over-year.

"The report also shows a clear divergence between property types and favouritism towards house properties. Detached home sales in the Peel region spiked to 43 per cent when compared to last year October," Rane says.

"Semi-detached properties and townhouses followed closely behind, both growing 31 per cent year-over-year. On the flip side, condo apartments were the only property type to see sales drop year-over-year by a slight 1 per cent."

Rane says the average home price for all property types in the region fell for the first time this year to $897,749 but was still up 14 per cent year-over-year.

According to TRREB, condo sales rose 2.2 per cent overall compared with this time last year, but fell 8.5 per cent in the city of Toronto and increased 28.4 per cent in the suburbs.

"In past years -- hot sellers' markets -- condos were selling in three to five days," Mak said.

"You're probably going to see listings in the 30- to 60- day sale cycles now, as opposed to three, five day cycles ... I feel it's almost a good problem to have as a buyer. It's like having too many options."

Experts say that the boom in condo inventory is related to investors offloading their Airbnb units in the face of new restrictions in Toronto. On top of that, it's harder for landlords to find renters -- such as tourists, students and young professionals -- in the downtown core amid travel restrictions, virtual learning and lingering joblessness during the pandemic.

Real estate board president Lisa Patel said that before COVID-19, investors were expected to sell more in 2020.

Mak said that despite the wave of new condos on the market, the overall demand to buy homes is still outpacing the number of new listings -- thus, prices are rising on the market as a whole. Immigration, which slowed during the pandemic, could also spur demand if policies change going forward.

With new cases of COVID-19 reaching daily highs in Ontario this week, Mak senses a split among sellers.

"We're seeing both ends of the spectrum. We're seeing people say, 'COVID is still here, still prevalent, and I don't want to show my property because I don't want people coming in,'" said Mak.

Mak said he understands why the hot suburban real estate market may be puzzling to onlookers, wondering how prices are rising amid an uneven economic rebound. Low interest rates are one factor helping homebuyers stomach the big purchase, Mak said.

"You're looking at these really great borrowing rates ... that is going to help fuel the purchasing side for the Toronto real estate market," said Mak. "I think if people look at real estate as sort of the most stable investment, the most long-term investment ... in this challenging time."

TRREB's chief market analyst Jason Mercer said that the overall Toronto housing market has now caught up to where it was this time last year, despite a near halt in home sales this spring when the COVID-19 lockdown began.

"Year-to-date home sales through October were above last year's level," Mercer said. "With this being said, we have not accounted for all of the pent-up demand that resulted from the spring downturn. Expect record or near-record home sales for the remainder of 2020."

Cocoa-bomb pop-up opening up in time for Valentine’s Day in Mississauga
Mississauga might remain in lockdown for the foreseeable future (perhaps beyond Feb.
END_OF_DOCUMENT_TOKEN_TO_BE_REPLACED