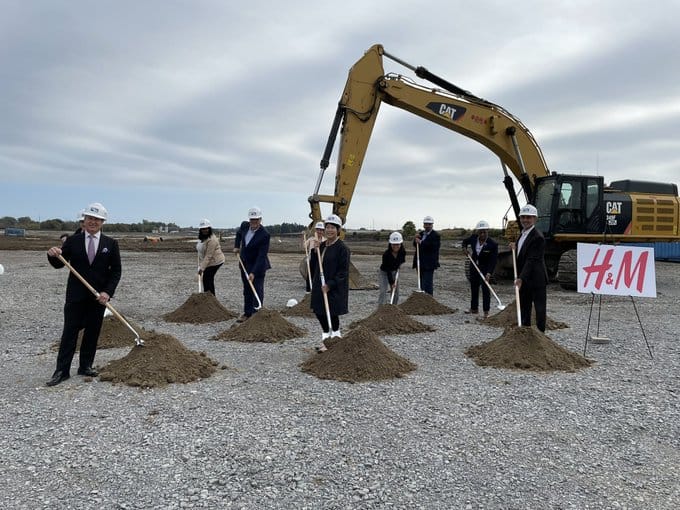 Blackwood Partners and Crestpoint Real Estate Investments, who bought the 129-acres industrial park two years ago, held a ground-breaking with H&M officials and local dignitaries last week for the 716,646-square-foot industrial building being constructed near Salem and Rossland roads.

Occupancy is expected to be this time next year. H&M, the world’s second-largest clothing retailer with 5,000-plus stores in 74 countries – including locations at the Pickering Town Centre and Oshawa Centre – will be the sole tenant in the building.

Amazon, who moved to an adjacent one million square-foot building which will employ 1,000 people, is now open for business.

Ajax Mayor Shawn Collier expressed his excitement over the economic opportunities for the Town at last week’s ceremony. “This half a billion dollar economic development project is so ‘above and beyond’ we have to call it a PARK … and it is anchored by one of the largest and most dominant e-commerce giants in North America.”

“These lands were pre-serviced by the taxpayers of Ajax for this exact opportunity,” he added. “When Ajax Council said we were committed to bringing jobs to Ajax this term, we were serious. Once built out, the full suite of GTA East Industrial Park tenants will employ close to 2, 200 people.”

The entire project consists of three buildings representing nearly two million square-feet of industrial space and $313 million in construction value. When all three buildings are operational, Ajax expects to collect approximately $2.1 million in permit fees and $15.7 million in development charges over the course of construction, followed by an estimated $920,600 in property taxes annually.

“The pace of interest in the Durham market, especially in Ajax, has increased substantially in the two-and-a-half years that we’ve been a player in the market,” said Lara Di Gregorio, Crestwood’s Director of Acquisitions and Asset Management. “As all of the product is being absorbed in the rest of the GTA, Durham is really rising to the top.”

The H&M warehouse, which will need “hundreds” of employees, is expected to serve most of Eastern Canada for the company as well as some online sales.

Thursday’s ceremony also served as a ground-breaking for the third building in the industrial park, a 189,811 square-foot facility that has yet to sign a tenant. ‘Building C’ is going through the site-plan approvals process and the site owners hope to have someone signed by the end of the year, with construction expected to take eight months.

TriAxis Construction will build both facilities.