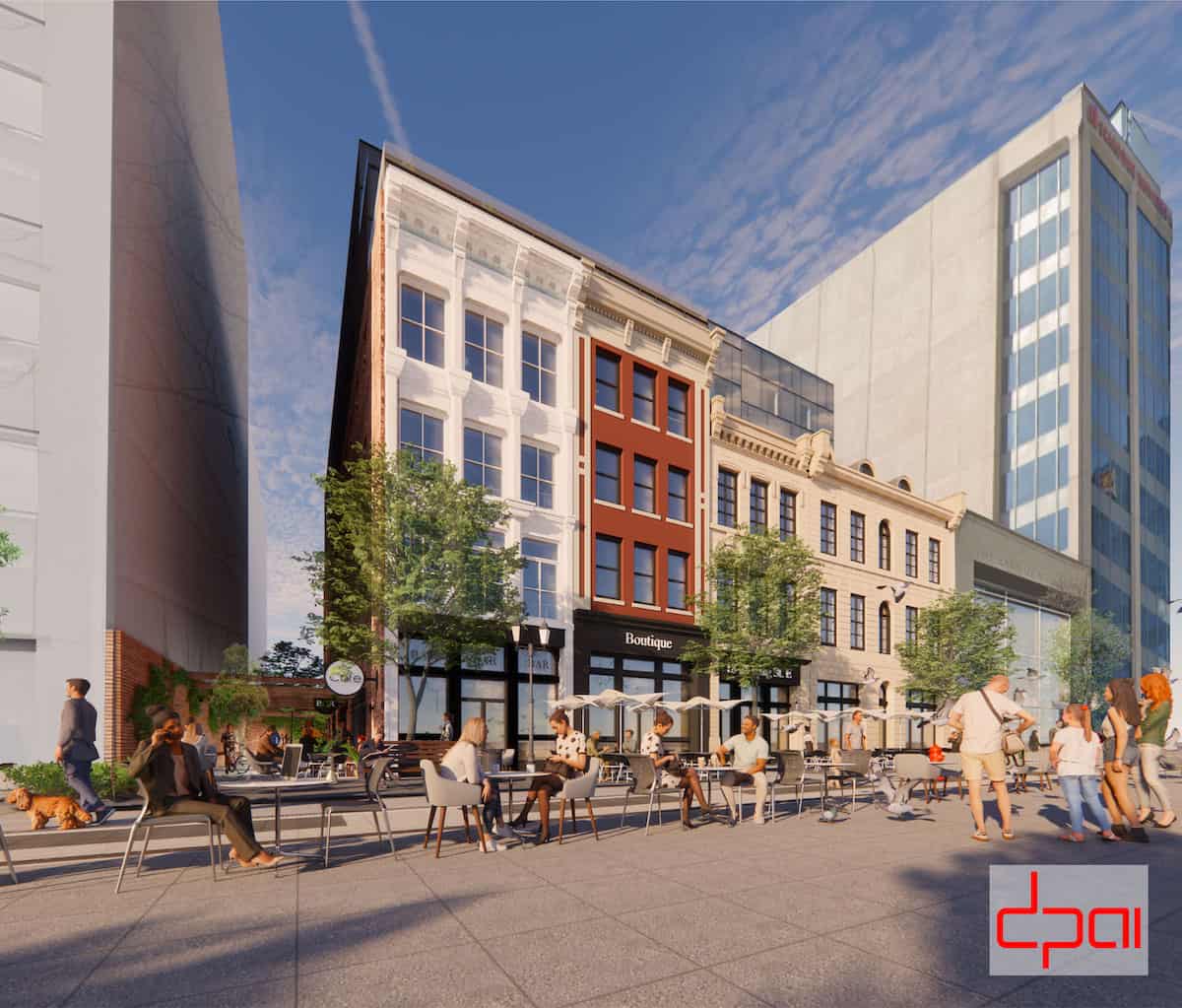 After nearly a decade of red tape and heritage assessments, Hamilton’s downtown core is about to get a major shot in the arm with The Gore Block.

The proposed six-storey project will include five storeys of office space and street-level retail.

“The development also plans to feature publicly accessible outdoor space and an internal courtyard, contributing to the vision of a pedestrian and people-friendly downtown Hamilton,” according to an official media release from Hamilton-based DPAI Architecture Inc.

Pre-consultation with the City’s Heritage Permit Subcommittee was completed on June 15 and final applications are expected to be submitted in mid-July.

With the heritage designation attached to the buildings in varying capacities, developers will be required to preserve the outside facade while the remainder of the building gets demolished.

“There was a thought that they would maintain all of the existing buildings and renovate them and interconnect them,” said David Premi, CEO of DPAI Architecture Inc.

But once selective demolition took place, the developers realized how poor the condition of the existing buildings was. Therefore, it made more economic sense for the developers to completely transform the space — while preserving the outside facade.

“You can’t demolish a building behind a facade and hope the facade is going to remain standing. It’s going to come down with the building,” said Premi, who has been consulting with a heritage engineer for the project.

“They are designing a steel structure that will be temporary — it will be installed in front of the facade and pinned through the facade to secure it so it can remain standing independently of the rest of the building.”

So the building will essentially be surgically removed from behind the facade and a new structure will be built.

The project will also consist of the replication and restoration of the roof of the Kerr Buildings (18-22 King St. East) to its original condition with three rounded dormers.

The 8,000 square foot space will include an underground parking garage, an alleyway that ground-floor retail can spill into, and a courtyard that will be visible from the building lobby.

“It’s really exciting,” added David. “Not only the things that are happening on the Gore but the new public spaces at the waterfront are under construction… looks like we got an LRT after we finally said yes to the blast network… we have the revitalizing of the entertainment facilities downtown… there’s just so much to be excited about in Hamilton.”

David moved his business from Toronto to his hometown of Hamilton in 2006 with high hopes.

“It’s been a fairly long wait, but it’s really happening now — I mean our renewal is underway in a bonafide way.”

Construction on The Gore Block is expected to begin in the fall of 2021.