OPINION: No pre-raging allowed in Mississauga, Brampton and beyond
Province reporting 502 new COVID-19 cases, 71 in Mississauga and Brampton
5 hot new eating spots to try in Mississauga right now
Walk Against Islamophobia happening at Celebration Square in Mississauga to honour family killed in London
Here's what's open in Mississauga under first phase of reopening

The Mississauga Cycling Advisory Committee (MCAC) is one of the committees in the City of Mississauga composed primarily of citizens, with the specific purpose of discussing cycling policy and how to promote cycling in Canada's sixth largest city. During one of their regular meetings recently, the committee discussed several items on their agenda.

Here are highlights on three issues they discussed that merit some attention.

Update on the Creditview Road Multi Use Trail

Matthew Sweet, the Active Transportation Coordinator for the City of Mississauga, outlined updates regarding the Creditview Road multi-use trail project, which will be funded to the tune of $337,000 from the City's approved budget, and a $300,000 contribution from a Canada 150 grant, outlined in a General Committee report back in March. Most of the multi-use trail projects in the 2017 Cycling Program have partial funding from the Federal Public Transit Infrastructure Fund, which is focused on establishing cycling connections to key transit destinations.

The project aim was to take the stretch of Creditview Road from Eglinton Avenue to Bristol Road and convert the sidewalks on either side into multiple uses for both pedestrians and cyclists. But in a recent public meeting that Sweet attended with Ward 6 Councillor Ron Starr, whose ward emcompasses this secton of Creditview, residents were overwhelmingly opposed to the idea, and they signed a petition in July expressing their concerns.

According to Sweet, they cited safety concerns and expressed a general sense that they didn't know what to expect from these proposed changes in front of their property. Councillor Starr had apparently told Sweet that if the residents were more evenly divided on this issue, say 50-50, he would have been fine with approving the multi-use trail, but with the opposition presented, Starr was hesitant to move ahead with it.

Reportedly, Councillor Starr did not say he wanted the multi-use trail project removed outright, since it is in the Cycling Master Plan, but just wanted the safety issue addressed, asking if there was an alternative with respect to the funding. However, there is a deadline when it comes to the Canada 150 funding, and if the local community doesn't approve it, then this multi use trail may not get built. Sweet advised MCAC that they are currently asking the federal government if they would be willing to approve any changes to the original proposal.

Insauga reached out to Councillor Starr for additional comments, but he was out of town for the Association of Municipalities of Ontario (AMO) annual conference in Ottawa as of this writing.

But there is a familiar undertone to the deliberations over the Creditview multi-use trail. One of the other committee members, Jonathan Giggs, asked if the concerns stemmed from only residents who live along Creditview worried about the effect on their property values. If you can read between the lines, it sounds like people concerned with things being built in front of their yards are having a problem with this proposal. Usually NIMBYism discussions are reserved for matters over new residential developments, but in this case it also applies to cycling infrastructure.

Should There be Enforcement of Cycling on Sidewalks in Mississauga?

When I first started riding a bike as a child, I always rode on the sidewalk because I was raised believing that nothing but cars and buses were allowed on the road, and I'm sure that a good chunk of other people out there who grew up riding bikes were taught that way as well. But in modern society, people now realize that sidewalks are primarily for pedestrians, hence the proliferation of bike lanes (and Mississauga recently was featured on national news about bike lanes).

The MCAC discussed cycling on sidewalks, as it has been an issue for Ward 8 Councillor Matt Mahoney. Mahoney wanted to formulate a discussion as to the best way to address safety issues surrounding cycling on sidewalks in his ward, as an email from a constituent sent to him and Mayor Bonnie Crombie in late July explained:

Today I was shaken by a gentleman on a motorized bicycle scooting past me on the right while walking along Glen Erin Drive - he moved on to the grass on my right to pass me. Two week ago I was similarly shaken by a gentleman peddling furiously and riding as fast as the cars, though he was on the sidewalk along Burnhamthorpe on the north side of South Common Mall.

You may recall that a couple of years ago a woman in Toronto was killed by a cyclist who was riding on the sidewalk, I believe along Bloor Street. He hit her and she hit her head, dying from head injuries.

I am not interested in this even repeating itself in Mississauga, most certainly not with me as the pedestrian.

I request that there be sufficient changes made, as soon as possible, to both publicize and then enforce that riding bicycles on the sidewalk is illegal. This will promote safety for pedestrians such as myself.

Based on this email, there seems to be little concrete enforcement of the by-law rules pertaining to sidewalks. According to Sweet, the by-law officers say they cannot stop people from riding on the sidewalks, and the police would not do anything. That is a gap that needs to be addressed.

Ward 3 Councillor Chris Fonseca, the council representative on MCAC, mentioned that the city has been trying to conduct a joint program with Peel Region that targets enforcement in select areas for year, without much success. But she suggested that enforcement could be done through a neighbourhood blitz of some kind; Fonseca cited how Halton Region was able to do so, so why can't Mississauga?

Committee member Irwin Nayer said there is a sense of frustration over the lack of enforcement. There would need to be either a change in the by-law enforcement rules currently on the city's books. If he was the councillor, Nayer said, It would not be a good idea to go back to residents and tell them there's nothing we can do.

Someone else also asked if the committee can take a more proactive approach and just find these cycling hotspots and enforce the by-laws on their own. Fonseca said other municipalities do not have a by-law of no cycling on the sidewalks, but people need to be courteous and respectful for everyone else on the sidewalk.

Another committee member, Jelmer Stegink, said there was difficulty in terms of engaging people and suggested coordinating with the Region of Peel to provide an educational awareness campaign for pedestrians and cyclists.

Giggs said people ride on the sidewalks because it is much safer. But some cyclists can be aggressive in terms of road sharing, which is ironic given that automobile drivers carry that same aggression on cyclists. The committee also discussed how they should properly carry out an education campaign; if they were not enforcing the by-law at all, then it will be hard to promote not to do something that seemingly has no consequences.

The committee also discussed community rides for residents that occur each year, publishing a schedule of rides around various areas in Mississauga. The below graphic is for rides up to the end of September, with more in October coming, such as a Halloween themed ride. 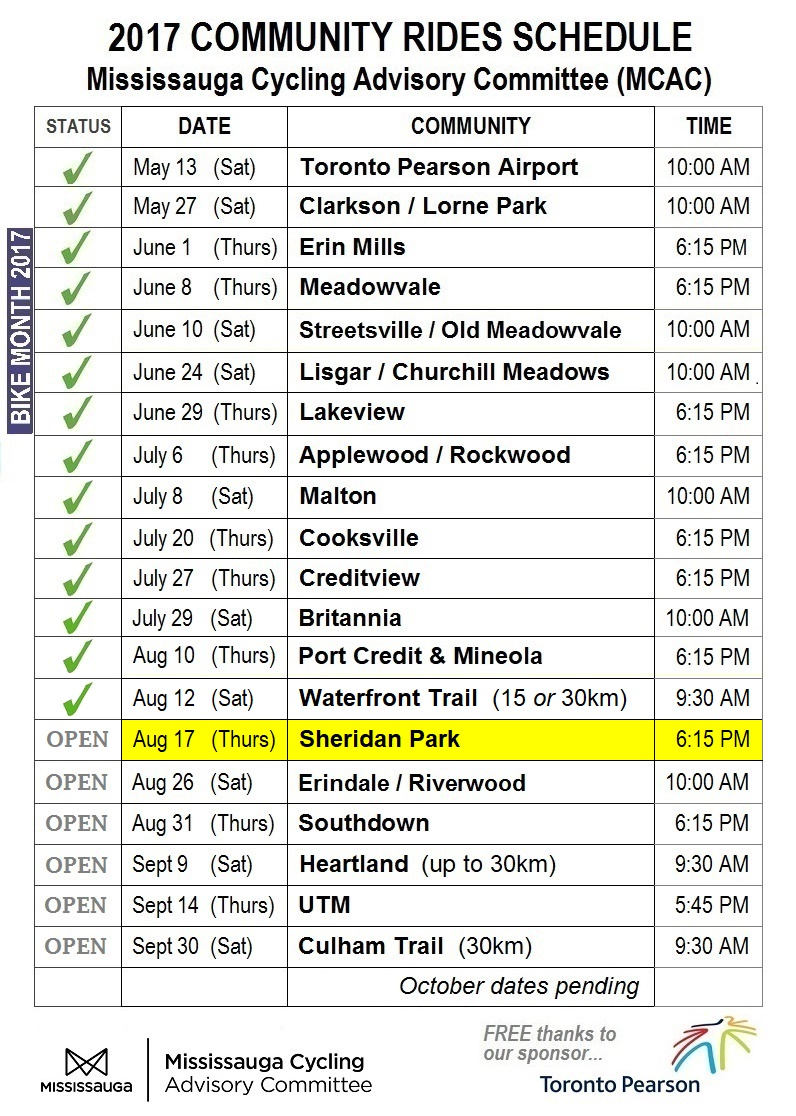 Some of the previous rides had to be pushed back a week or so later due to heavy rains, but most of them occur on schedule. If you're an avid cyclist and looking for areas to bike around Mississauga with some like minded cycle enthusiasts, look them up.

So while some of these committees with Mississauga City Hall may sound boring, they actually discuss rather important issues, like cycling on sidewalks, that are pertinent to people living in a big city.