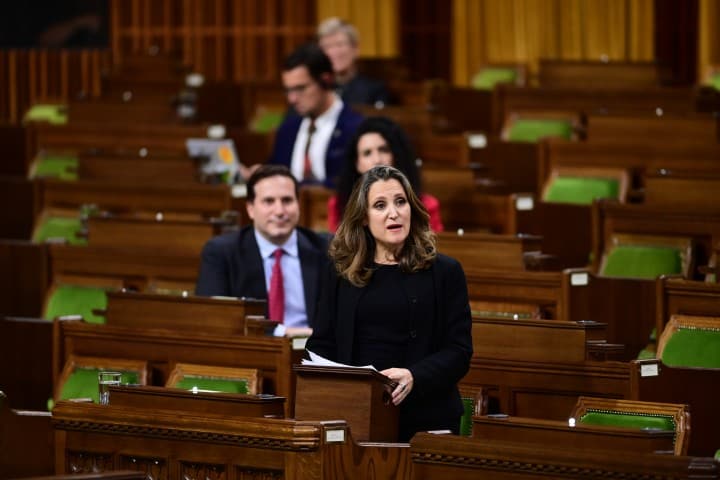 A boatload of borrowing. The federal deficit is sailing toward $381.6 billion this year, but could close in on $400 billion if widespread lockdowns return in the coming weeks, according to the fall economic statement. A big reason for that eye-popping sum is the total cost of Ottawa’s response to COVID-19, which amounts to $490.7 billion. That also means more than $8 out of every $10 in federal and provincial support comes from the capital, down from $9 out of every $10 from the July fiscal snapshot.

The “Netflix tax.” For the first time, Netflix and other foreign streaming giants such as Amazon and Apple TV+ will be subject to sales tax in Canada, according to the fiscal update. The government says GST/HST will apply to all companies that provide digital services — which means Netflix and Airbnb would charge sales tax on subscriptions and reservations north of the border. While the European Union moved to tax digital platforms two years ago, Freeland said Canada is prepared to act “unilaterally if necessary.”

Work-from-home tax break. Employees working from home with “modest expenses” in 2020 can claim up to $400, based on time spent at the dining-room desk. Canadians can make the claim “without the need to track detailed expenses,” and the tax man “will generally not request” confirmation from employers, the economic statement says.

Increasing fiscal-stabilization payments. Responding to a call from provinces whose finances have taken a beating, the Liberals say they will increase the maximum payment under a program designed to help provincial governments deal with temporary economic shocks. The cap will go from $60 per resident, set in 1987, to $170 per person and increase with economic growth.

Support the troops. The government is also proposing to sign off on an additional $600,000 to top up the Veterans Emergency Fund that would ensure more financial support for veterans whose well-being is at risk “due to an urgent and unexpected situation.”

All the wage. For businesses, the government wants to bring the wage subsidy back to 75 per cent of company payroll costs and extend the business rent subsidy to mid-March. The Trudeau government had previously extended the Canada Emergency Wage Subsidy to the summer, while the adapted business-rent subsidy — revised from a less popular iteration that hinged on landlord participation — was slated only to continue through the end of the year.

Clean water for Indigenous communities. The government is pledging to invest $1.5 billion in 2020-21 to work toward lifting all long-term drinking water advisories in Indigenous communities, and $114 million each year after. The Liberals have maintained a years-long pledge to lift all outstanding boil-water advisories for Indigenous residents by March 2021. Prime Minister Justin Trudeau said last month that about 95 advisories had been lifted since the party came to power in 2015, but more than 60 remained the last time figures were updated before the pandemic.

A $100-billion stimulus. The government plans to spend between $70 billion and $100 billion over the next three years to stimulate the economic recovery from COVID-19. The boon amounts to between three and four per cent of GDP, and will tilt toward a “greener, more innovative” bounce-back, though the details are to be determined.

Get retrofit. Ottawa is aiming to dole out $2.6 billion over seven years to help homeowners make their digs more efficient, starting in 2020-21. The cash, channelled through Natural Resources Canada, would take the form of up to 700,000 grants of $5,000 or less to help with projects that could range from energy-efficient heating to solar-panel installations. The upcoming plan, with eligibility retroactive to December 2020, fulfils a Liberal election promise from last year.

Cash for families. Looking to boost temporary support for parents, the Liberals plan to provide up to $1,200 per child under six years old for low- and middle-income families that are entitled to the Canada Child Benefit, starting next year. The bump marks an increase of nearly 20 per cent above the benefit’s current maximum payment.