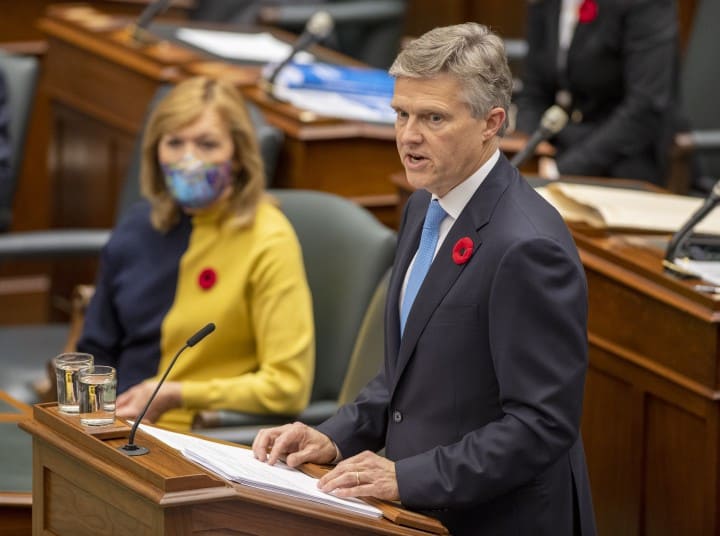 The government’s fiscal plan involves a record $187 billion in expenses, with $30 billion specifically in pandemic-related spending.

The province will also have a record deficit of $38.5 billion.

The budget lays out three different scenarios that could see the province’s deficit levels change in the coming years depending on how long the pandemic lasts.

The fiscal plan does not lay out a path to balance, with the government saying that will come in the 2021 budget.

The province says it is spending $2.5 billion more in the hospital sector this year to help fight the pandemic.

The budget allocates an additional $572 million today for costs incurred during the health crisis.

Hospitals have been asked to anchor much of Ontario’s pandemic response, including running COVID-19 testing centres and assisting some long-term care homes.

The facilities have also struggled with capacity issues through the second wave of the pandemic as they respond to a rise in cases while avoiding canceling surgeries.

The budget includes a new tax credit to help seniors live in their homes longer.

It will reimburse them for 25 per cent on eligible renovations of up to $10,000, regardless of their income and whether they owe taxes for 2021.

The government says the minimum credit will be set at $2,500.

The temporary measure can be used for things like installing wheelchair ramps, non-slip flooring, and additional light fixtures.

The province says it will subsidize a portion of hydro rates for medium and large commercial and industrial businesses.

It says the costs of hydro prices for these businesses are making the province uncompetitive with other jurisdictions.

The province estimates the program will cost $1.3 billion next year with costs gradually declining until 2040.

The budget lays out a recently announced commitment to provide nursing home residents with an average of four hours of daily direct care.

But it contains no cost estimates for the program, which the government has said will require the hiring of tens of thousands of health-care workers.

The standard would be an increase over the two hours and 45 minutes of direct care that is the current daily average received by long-term care residents.

The budget renews funding to help parents with the added costs of at-home education.

The program consists of $200 per child under 12 and $250 per child or youth with special needs.

That program will cost the province $380 million, on top of the $378 million spent earlier this year.

The province says the program is intended to help parents cover costs like workbooks, school supplies, and technology.

The government is freezing scheduled tax increases on beer and wine until 2022.

The province says it is making the move to help businesses in the hospitality sector that have been hit hard during the pandemic.

The government had previously frozen the scheduled tax increase for the current fiscal year.

The province says it will spend an additional $680 million over the next four years to expand rural broadband access.

The budget says that when the new cash is combined with previous investments it will total nearly a billion dollars over six years for broadband expansion.

The program is expected to increase broadband access for 220,000 homes and businesses across Ontario.

The government says the pandemic has highlighted the need for expanded broadband and cell service.