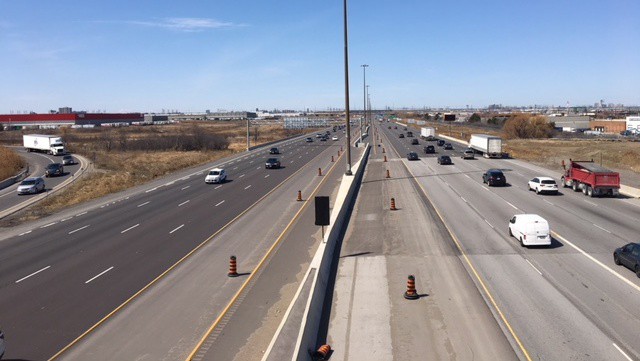 If you take the 410, you know that construction has been ongoing for years. Now, we’re inching closer to the project’s completion date.

If you take the 410, you know that construction has been ongoing for years. Now, we’re inching closer to the project’s completion date.

The massive redesign on Highway 410 began in 2014, where the Ministry of Transportation (MTO) aimed to reconstruct the 410  from Eglinton Ave on the 403 to north of Queen Street.

It’s true that construction is set to finish this year, in fall 2018.

That means a new HOV lane, a new general purpose lane, commuter parking lots at the Courtneypark and Clark interchanges, widened lanes, and traffic cameras are going to be in place very soon.

You might have seen much of this construction, but as the project nears completion, it’s interesting to note just how much is in the works and will soon be ready for use.

The HOV lane, for instance, runs along the Highway 403 northbound Collector, from just north of Eglinton Avenue to the Highway 401/Highway 410 interchange.

The lane is actually the lane next to the median barrier wall on the 410/403, north and south.

“Before the HOV is completed, (work includes all asphalt, sewers, signage, and pavement markings) and can be placed into the correct alignment, traffic will not be allowed into this area,” reads the site.

Even a new storm system has been in the works, complete with seven storm water management ponds.

Nightly lane closures are still in effect for parts of the road.

The final season of work started in April 2018, and it’ll be completed later this year in the fall.

Here’s exactly what’s happening from April until the fall, courtesy of the MTO:

What do you think of the project?