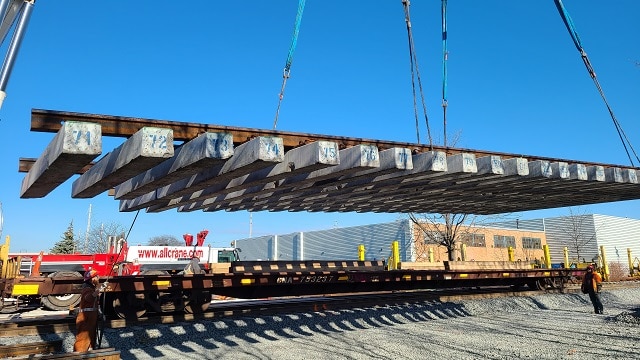 According to Metrolinx, construction for the Hurontario Light Rail Transit (LRT) project, accessibility upgrades at the GO Station, and major track work are all underway, signaling big changes for the station and the community it serves.

“Port Credit GO is a busy station on a normal day, transporting the residents of southern Mississauga on their daily commutes,” Metrolinx said in a recent blog post.

“Which is why it has been the focal point of so much work in the past year, with scheduled construction still to come.”

Work to make Port Credit GO more accessible and safer began in August 2020 with upgrades to the east ramp, followed by repairs to the island platform in September and the installation of yellow tactile safety tiles on both platforms starting in October and November.

Construction of a new accessibility ramp on the west side of the south platform also began in the fall of 2020 and is still under construction. Metrolinx says the ramp, which is expected to be done later this spring, will offer customers a connection between the bus loop and the south platform.

“These are important and necessary upgrades as the elevators are nearing the end of their lifespan. This work will result in the complete shutdown of the elevator on the island platform, which will make this platform inaccessible for customers with accessibility needs.”

The much talked about Hurontario LRT station, expected to begin operations in late 2024, will be located adjacent to the Port Credit GO and will provide connections to the Milton GO Line via Cooksville GO, Brampton Transit, MiWay and Square One.

A light rail vehicle moves through a tunnel, in this rendering of the Hurontario LRT. (Metrolinx image)

Beginning in the evening of March 12 until the morning of March 14, 2021, Metrolinx says there will be periods where Lakeshore West train service will be suspended between Port Credit GO and Union Station to allow for important track upgrades.

“Throughout that weekend, customers travelling on the Lakeshore West line will have to transfer between the Lakeshore West train and GO buses at Port Credit GO, which will then travel directly to the new Union Station Bus Terminal,” according to Metrolinx.

A large piece of track with concrete rail ties is lowered into place during the last major phase of track work on the Lakeshore West line. (Metrolinx photo)

“Long Branch GO, Mimico GO and Exhibition GO will not have any service while this track work is being done. Shutting down sections of the track for construction is necessary to make important upgrades to aging rail infrastructure which will improve train speeds, service life and reliability, in order to provide better service in the future.”

This track upgrade project is expected to see further weekend service adjustments in April and May over the holiday weekends.

Which of these new changes are you most excited to see?