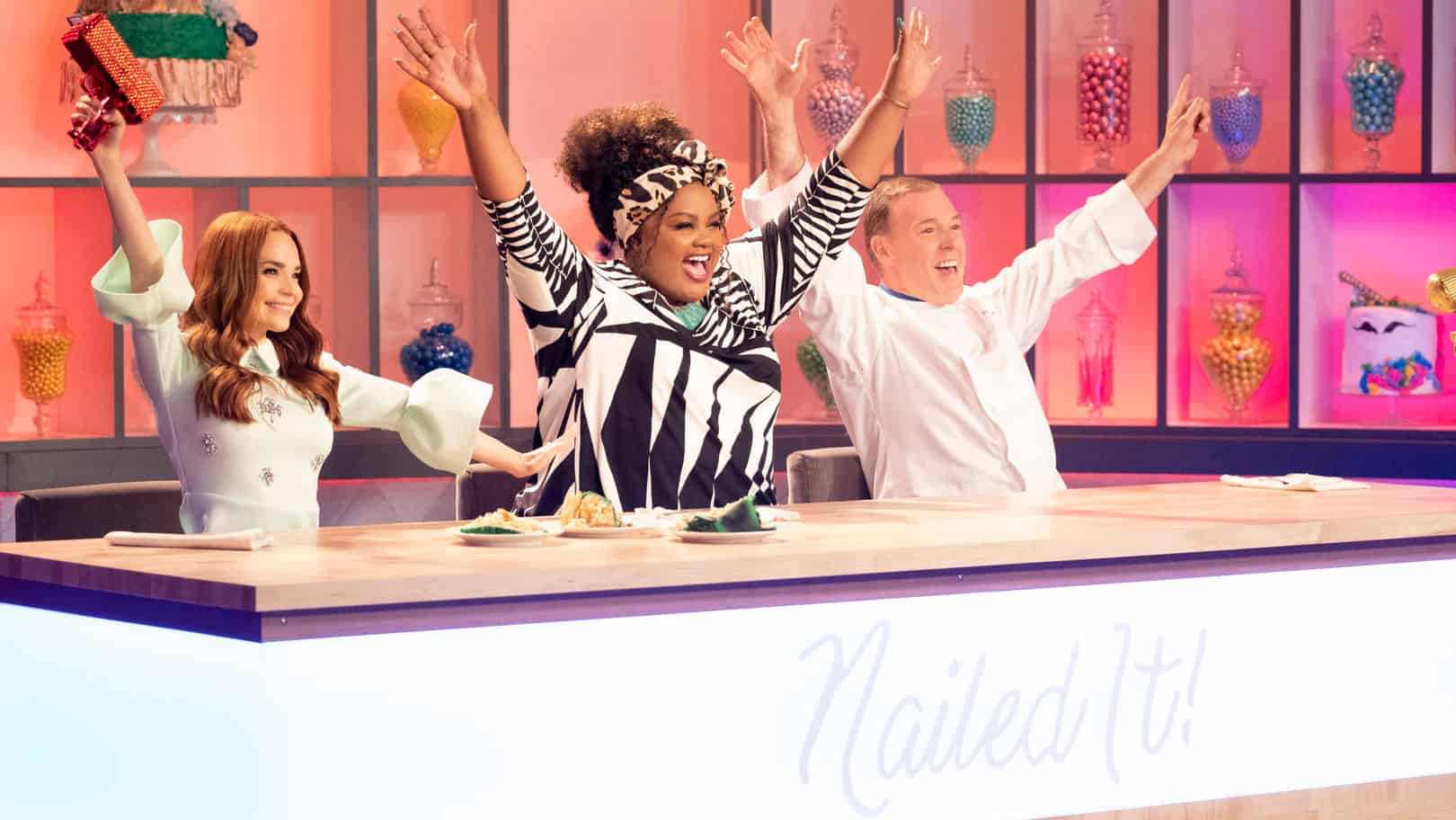 The month of April flew by and its end is near. And if you breezed through you April ‘to-watch’ list on Netflix, you may be excited to hear that soon you’ll have some fresh content to indulge in.

Netflix Canada recently announced the titles that are coming (and leaving) to the popular streaming website next month.

And as usual, we have the scoop!

Here’s what’s coming to Netflix Canada in May.

Knock Down The House — NETFLIX FILM

Haunted by terrifying visions, a Muslim healer finds his faith tested when he helps a woman locked in battle, body and soul, with a diabolical leader.

Diary of a Wimpy Kid: The Long Haul

After their mother’s death, four sisters learn a shocking family secret and embark on an adventure to discover the truth about their genealogy.

All In My Family — NETFLIX ORIGINAL

From documentarian Hao Wu comes a heartfelt portrait of how he created a thoroughly modern family in America, only to face the dilemma of introducing his same-sex partner and their children to his deeply traditional parents and relatives in China.

A woman sexually assaulted by her new boss’s brother-in-law tries to move on as if nothing happened, but the night weighs heavily on her mind and body.

Dead to Me — NETFLIX ORIGINAL

A dark single-camera comedy about a powerful friendship that blossoms between a tightly wound widow and a free spirit with a shocking secret.

A chronicle of the crimes of Ted Bundy from the perspective of Liz, his longtime girlfriend, who refused to believe the truth about him for years.

Faced with various frightening and uncomfortable events, contestants in this game show had better not flinch — or they’ll suffer painful consequences.

On the run from a dogged internal affairs agent, a corrupt cop reluctantly teams up with a defiant teen to unravel a conspiracy — before it’s too late.

Standing on the precipice of adulthood, a group of friends navigate new relationships, while re-examining others, during their final summer before college.

Two bird women — a carefree toucan and anxious songbird — live in the same apartment building and share their lives in this animated comedy.

A major ecstasy producer living in luxury on the Dutch-Belgian border faces big changes with two undercover agents begin moving in on his operation.

A prosecutor discovers that she’s been reincarnated into a different person after getting into an accident — and also learns she’s not the only one.

As Chloe struggles to come to terms with Lucifer’s disturbing revelation, a rogue priest sets out to stop a long-rumored prophecy.

An odd encounter with a fan and a tryst with that fan’s ex-boyfriend leads a sexually adventurous singer on an escapade in Chile.

Diverse characters fumble through the modern maze of love, sex, technology and culture in Chicago.

After her partner cheats on her, an architect returns to her hometown to reassess her life with the help of her eccentric family. Based on the novel.

The hardworking Harvey Girls are back, making new enemies in the form of older siblings, finally meeting their boy-band idols — and more!

At the Sacramento County Jail, incarcerated women fight the power and one another as they try to make the best of life — and love — on the inside.

A long form documentary series of high profile, in-depth stories about music’s impact on society, as told by critically acclaimed directors, with each episode revealing surprising insight beyond the expected or commonly known. Lion’s Share tracks South African journalist Rian Malan’s journey to find the original writers of the legendary song “The Lion Sleeps Tonight,” which earned over 15 million dollars in royalties for American groups like The Tokens, Pete Seeger and the Weavers. Malan discovers the original writer, a black South African named Solomon Linda, whose family currently lives in poverty in the slums of Sweto. Driven by his own guilt that his uncle was one of the architects of apartheid, Malan goes after fat cat businessmen in the US music industry to force them to pay their fair share to Linda’s family.

Fresh out of prison and forced to fend for himself on the streets of Marseille, 17-year-old Zac falls in love with a young prostitute Shéhérazade.

The Society follows a group of teenagers who are mysteriously transported to a facsimile of their wealthy New England town without any trace of their parents. Their newfound freedom will be fun… but it will also be very dangerous.  As they struggle to figure out what has happened to them and how to get home, they must establish order and form alliances if they want to survive.

During a vacation to Napa Valley, a group of long-time friends reunite and revisit past choices in this hilarious and heartfelt comedy from director Amy Poehler.

When a long list of shenanigans lands Tyler in hot water, he’s forced to suit up and spend his summer training for an elite junior lifeguard program.

When Shibuya time-warps to 2388, high schooler Daisuke and his friends are conscripted by AHRV agent Milo to fight the hostile cyborg race, revisions.

The stars come out for this special tribute to “Laugh-in,” the revolutionary sketch comedy show of the 1960s and ’70s.

1994 is an hour-long 5 episode investigative documentary series that will tell the story of one of the most critical years in Mexico’s history.

A digital series that follows a man and his beloved dog Bruno strolling around his neighborhood.

A woman whose parents were killed by a gang when she was a child grows up to be a hired assassin. Unfortunately, trying to leave that past behind is proving to be more difficult than it seems.

Seeking answers after a life-changing incident in 2012, filmmaker Hernán Zin interviews other war reporters about the personal toll of their work.

Nicole and Jacques are back to judge the chaos in the kitchen, from half-baked doll cakes to delightfully creepy edible clowns.

Trapped in the Zone, Simone and her friends must find a cure for the virus Rasmus is carrying before it kills him — and the rest of humanity.

A third-rate actress with leukemia becomes entangled with CEO Ling because she needs him for treatment. In order to receive bone marrow transplant sooner and to continue her career as an actress, Xia Lin enters into a secret marriage with Ling Yi Zhou, the CEO of a company. Despite the conspiracies and misunderstandings they encounter, the two find true love.

After forcing Walsh out, Vincent’s headaches include answering to a gangster boss and a new rival salesperson who’s swooping up all the best jobs.

While Teddy works toward finishing his application for MIT’s summer robotics program, Emil tries to squeeze even more fun out of his time in Peoria.

Emmy Award-nominated actress and 30-year comedy veteran, Wanda Sykes, delivers a sharp-witted and hilarious critique on the state of the world in her first Netflix comedy special, Wanda Sykes: Not Normal.  The one-hour special addresses the comedian’s perspective on the current political and cultural climate, which she can only describe as, well … not normal!

Two countries, two restaurants, one vision. At Gabriela Cámara’s acclaimed Contramar in Mexico City, the welcoming, uniformed waiters are as beloved by diners as the menu featuring fresh, local seafood caught within 24 hours. The entire staff sees themselves as part of an extended family. Meanwhile at Cala in San Francisco, Cámara hires staff from different backgrounds and cultures, including ex-felons and ex-addicts, who view the work as an important opportunity to grow as individuals. A Tale of Two Kitchens explores the ways in which a restaurant can serve as a place of both dignity and community.

One Night in Spring — NETFLIX ORIGINAL

When Lee Jeong-in and Yu Ji-ho meet, something unexpected happens. Or it just may be that spring is in the air — and anything is possible.

Rampaging serial killers leave carnage in their wake as their next victims fight to stay alive in this honor anthology series.

Short following families in Puerto Rico who are currently living in FEMA hotels around New York City. Their stories will unfold observationally over the course of the next month as they face the extreme situation of getting kicked out of the hotel or are forced to go back to Puerto Rico. Many people see these families as illegal immigrants and don’t want them here. We follow these families as they try to maintain their Puerto Rican identity, but assert their American citizenship.

Mysterious deaths aboard a luxurious ship traveling from Spain to Rio de Janeiro in the 1940s reveal secrets surrounding two sisters traveling together.

Joy is a young Nigerian woman, caught in the vicious cycle of sex trafficking. She works in this merciless system of exploitation to pay off debts to her exploiter Madame and supporting her family in Nigeria.

Rim of the World — NETFLIX FILM

Four misfit campers must band together and conquer their fears in order to save the world during an alien invasion.

A troubled musical prodigy (Allison Williams) seeks out the new star pupil (Logan Browning) of her former school with shocking consequences in this elegant and terrifying suspense ride, the most buzzed-about movie at last year’s Fantastic Fest.

WHAT / IF — NETFLIX ORIGINAL

Renowned “Roastmaster General” Jeff Ross’s new half-hour comedy series Historical Roasts brings together A-list comedians in period-appropriate garb to celebrate prominent historical figures of the past, from Presidents (Abe Lincoln) to Rockstars (Freddie Mercury) and everything in between. Based on the Los Angeles live show of the same name, the six-episode series is “teaching history a lesson” and honoring some of the most important voices of our time the only way they know how — with a searing roast. Launching globally on Netflix Monday, May 27, Historical Roasts features a stellar lineup of comedian guest stars including Bob Saget, John Stamos, Natasha Leggero, Jaleel White, Fred Willard, Nikki Glaser, Rachel Feinstein, Ryan Phillippe, Ken Marino, Gilbert Gottfried, Seth Green, Yamaneika Saunders, and Neal Brennan to name a few. The series is produced by OBB Pictures.

Disney’s The Nutcracker and the Four Realms

An under-confident but talented girl, who is sidestepped at every stage of her life, seeks out an enigmatic con to help recover her stolen car from a goat-loving crazy Mumbai gangster and in the process finds her confidence and place in the sun.

Always Be My Maybe — NETFLIX FILM

Major Weiss’s recovery prompts residents to question the odd circumstances she was found in, and how she survived injuries that would kill anyone else.

In their second season, the women come face-to-face with the consequences of their criminal behavior.

What if a teenager built up a drugs empire from his bedroom in Leipzig? Inspired by real events.

A seductive man has romantic affairs with three prosperous women — including a mother and her daughter — in Colombia’s Coffee Triangle.

The true-life story of a Brazilian TV host who literally killed for ratings — and used his crime TV show to cover up the grizzly truth.

Sentenced to seven years in prison for crimes her boss committed, naïve Macarena struggles to adapt in an environment filled with dangerous women.

When They See Us — NETFLIX ORIGINAL

A four-part limited series from director Ava DuVernay that continues themes from her documentary 13th, her exploration of the criminal justice system through the true case of the Central Park Five – 5 young teenagers who were wrongfully accused and convicted of rape.

Scent of a Woman

All information and photos are courtesy of Netflix Canada.