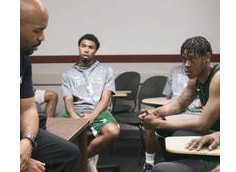 While the approaching warmer weather might have you itching to get back outside, the rising number of variant cases of COVID-19 could have you still feeling hesitant.

Fortunately, if you’re planning on still staying inside, Netflix has you covered.

This is everything coming to and leaving Netflix Canada in March, 2021.

All information and images courtesy of Netfllix

Biggie: I Got a Story to Tell — NETFLIX DOCUMENTARY
Featuring rare footage and in-depth interviews, this documentary celebrates the life of The Notorious B.I.G. on his journey from hustler to rap king.

How to Be a Latin Lover

Just One of the Guys

The Mask of Zorro

The Texas Chainsaw Massacre: The Beginning

When Calls the Heart: Season 5

You Don’t Mess with the Zohan

Moxie — NETFLIX FILM
Inspired by her mom’s rebellious past and a confident new friend, a shy 16-year-old publishes an anonymous zine calling out sexism at her school.

Murder Among the Mormons — NETFLIX DOCUMENTARY
Salt Lake City, 1985. A series of pipe bombs kills two people and severely injures another, jolting the epicenter of the LDS Church. The murders send further shockwaves through the community when a trove of early Mormon letters and diaries are found destroyed in the vehicle of the third victim, Mark Hofmann, a renowned collector of rare documents, including the infamous White Salamander Letter — an artifact whose contents threatened to shake the very foundations of Mormonism. As Hofmann fights for his life, investigators race to uncover the truth. Directed by Jared Hess (Napoleon Dynamite) and Tyler Measom (An Honest Liar), MURDER AMONG THE MORMONS is the first comprehensive look at one of the most shocking crimes to have ever taken place among the Mormon community and the criminal mastermind behind it all.

How To Build A Girl

The Tale of Despereaux

City of Ghosts — NETFLIX FAMILY
Meet the Ghost Club! Their adventures take them all around Los Angeles as they interview ghosts, solve problems and learn about their city’s history.

Dogwashers — NETFLIX FILM
When a narco past his prime refuses to pay a debt to an upstart, only a secret stash of money can save his men. But guess what the gardener just found?

Sentinelle — NETFLIX FILM
Transferred home after a traumatizing combat mission, a highly trained French soldier uses her lethal skills to hunt down the man who hurt her sister.

Bombay Rose — NETFLIX FILM
Escaping from child marriage, a young club dancer living in the streets of Bombay, must choose between fending for her family and finding love with a boy orphaned by the militancy. Painted frame by frame and woven delicately through music, a red rose brings together three tales of impossible loves. Love between two dreamers tested by duty and religious divides. Love between two women. Love of an entire city for its Bollywood stars. Based on true events, the film, in documentary fashion, explores the ruthlessness of a society where the love and life that reigns on the big screen can crush you in its mean streets. Bombay Rose is directed by Gitanjali Rao and produced by Cinestaan Film Company/Les Films d’ici. An award-winning festival favorite, it was the first Indian animated film ever selected to open Venice Critics Week; it was also selected by the Toronto International Film Festival and the BFI London Film Festival, and an award winner at the Chicago and Mumbai Film Festivals.

StarBeam: Season 3 — NETFLIX FAMILY
StarBeam is back with her family and favorite sidekicks to defend Somerset from all the wacky villains trying to stir up trouble and spoil the fun!

Dealer — NETFLIX ORIGINAL
Tensions erupt when two filmmakers infiltrate an area ruled by gangs to shoot a music video for a rapper in this gritty found-footage series.

Last Chance U: Basketball — NETFLIX DOCUMENTARY
From Greg Whiteley (Cheer) and the team behind Emmy-winning Last Chance U comes LAST CHANCE U: BASKETBALL, an honest, gritty look inside the world of community college basketball. Over the course of eight episodes, viewers will follow the East Los Angeles College Huskies (ELAC) in their high stakes chase to an unprecedented California state basketball championship. Led by passionate head coach John Mosley, the ELAC team is made up of former D1 recruits and powerhouse athletes hustling to prove themselves for a last chance to fulfill their dreams of playing at the next level. But the team is tested as the players battle adversity, inner demons, and emotions on and off the court.

Marriage or Mortgage — NETFLIX ORIGINAL
A wedding planner and a real estate agent compete to win the hearts and budgets of spouses-to-be. Will they pick fairy-tale nuptials or a dream home?