Here's How This Major Subway News Could Affect Mississauga

It looks like Doug Ford's plan to take over Toronto's subway system is well underway.

The Ontario government, the Toronto Transit Commission and the City of Toronto have signed what is known as the 'terms of reference' when it comes to allocating responsibility for one of North America's largest and frequently used public transit systems.

Under the TOR, the province will be looking at various options, including the 'upload' model in which the province assumes the building of new and maintaining existing subway lines while leaving 'day to day' operations with the city. Other options include potentially transferring assets of ownership over to the province or "a realignment of responsibilities".

“Necessary maintenance and investment in the subway system has been put off for too long. We’ve also been waiting far too long for subway expansions. New subway construction has been stuck in red tape, for years. It’s time to take action and speed things up," Ford said in a statement.

"These Terms of Reference will help guide our next steps and steer the consultation process with the City and the TTC on uploading the subway infrastructure from the City of Toronto, including the building and maintenance of new and existing subway lines. With an upload, our government can cut through red tape to start new projects and finish construction faster."

During the provincial election campaign last year, Ford invoked a promise to take over running the city's transit system, at least the subway portion, in order to build more subways, even extending the existing tracks out into the 905 area in places like Pickering, Markham and Mississauga.

As expected, the Ontario NDP were not too pleased with these latest developments.

"What Toronto's subways need is the provincial investment they're owed, not a complicated Doug Ford scheme to break subways apart from the TTC and steal control and ownership away from the people of the GTA," said the NDP's transit critic, Jessica Bell.

The NDP also blame the previous Liberal government for "letting transit crumble", invoking how the funding formula used to be the province footing 50 per cent of operating costs, saying jam-packed subways, buses and streetcars was the end result.

"We're worried Ford is plowing ahead with this scheme because he has a plan to sell-off parts of Toronto's subway system to those he trades favours with, so they can make a profit off transit riders. People deserve better commutes -- not more crowding, more costs and more delays."

Some Toronto councillors, like Joe Cressy, called the subway upload 'a slogan in search of a solution,' saying the system needed to operate as one. 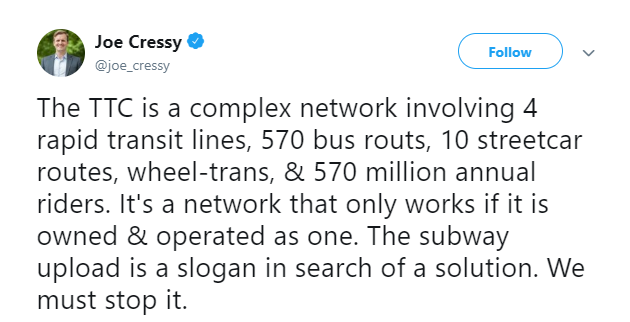 But others, such as Ford's nephew Michael (also a Toronto councillor from Etobicoke), were more optimistic that this would put 'petty politics' aside in order to build more transit.

Bear in mind, this is only the first step in what would be expected to be a long process unfolding. It will be more interesting to see how and if the Ford government's little "takeover" of the TTC subway could actually result in more lines being built faster, and into the rest of the GTA.

The other consideration is that building new subway lines takes time and money, lots of both. It could be decades before we see another new subway line extention break ground, even if construction started today and it was fully paid for.

One can dream, and Doug Ford certainly sounds like he’s dreaming.