Here's How Many Jobs Canada Added in December

As 2018 closed out last month, you may have wondered how the overall economy did last year.

Statistics Canada has released the latest job numbers for Canada, and suffice it to say...not much has changed.

And that’s a good thing.

According to Stats Can, employment held steady in December and the unemployment rate was unchanged at 5.6 per cent, as shown in this chart. 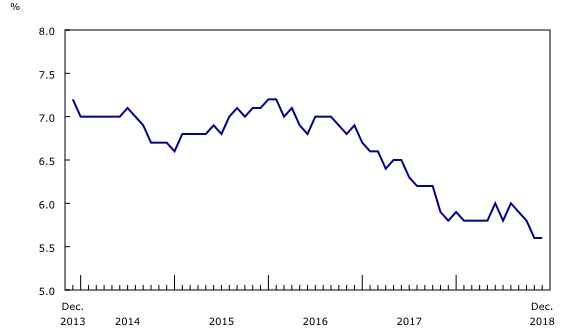 In comparison, five years ago around the same time in 2013, the unemployment rate was at 7 per cent.

Here in Ontario, employment grew by 78,000 (+1.1 per cent) in 2018, all in full-time work. The unemployment rate in the province edged down 0.2 percentage points to 5.4 per cent, the second lowest rate among the provinces.

Employment gains were recorded in several industries, led by transportation and warehousing, and educational services. These gains were partially offset by declines in wholesale and retail trade as well as in information, culture and recreation.

The number of private sector employees increased (+101,000 or +0.8 per cent), while public sector employment was little changed.

For all the information from Statistics Canada’s latest job numbers report, click here.

New bubble tea and smoothie store opened up in Square One in Mississauga
If you find yourself in the mood for fresh juice and other healthy but tasty concoctions, you might be happy to hear that a new option is in town.
END_OF_DOCUMENT_TOKEN_TO_BE_REPLACED