Here’s Everything Doug Ford Has Done Since Being Elected 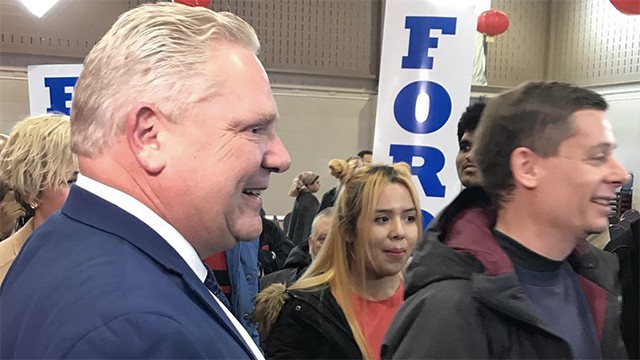 Doug Ford and the PC Party have been in power in Ontario for about two weeks now. Since that time, Ontario has seen quite a dramatic shift in policy and governing style. The PC majority government seems to have hit the ground running and has taken action on a number of policies (delighting and angering various swaths of voters in the process, of course).
With that, here are some things Premier Ford and the PC government have done since coming to power on June 29:
Declare and end to cap and trade
One of Ford’s key campaign promises was to end cap and trade in Ontario. On July 3, the premier’s office released a statement saying that they had revoked a regulation that outlines the carbon pricing system. Ford said this will help lower costs for things like gas prices and home heating. The opposition, like Green Party leader Mike Schreiner for instance, said it is “reckless and irresponsible.” Schreiner said it will result in a huge lack of funding for the province and green initiatives.
No longer help with asylum seeker resettlement
On July 5, the PC government announced that it would no longer assist the federal government with the resettlement of refugees in Ontario. The flow of asylum seekers into Canada has recently caused a crisis in some areas of the province, particularly in Toronto where asylum seekers now make up about 40 per cent of the shelter system. The premier’s office said that this is, “100 per cent the result of the Federal Government,” and that they would no longer fund refugee resettlement programs. The announcement came just days after Toronto Mayor John Tory called on the provincial and federal government to help the city with asylum seekers. After Prime Minister Trudeau met with Premier Ford the same day of this announcement, he suggested that Ford did not fully understand Canada’s international obligations to assist refugees.
Remove law capping ticket resale prices
The Ford government delayed the implementation of a law that was supposed to cap ticket resale prices at a maximum of 50 per cent above face value. It was supposed to take effect on July 1. The PCs said there was no way to enforce the law and that it would result in “less consumer protection” so they delayed its implementation. Leader of the Official Opposition, Andrea Horwath, responded by saying, “Mr. Ford has taken the side of scalper-bots.”
Halt vaping bans
The Ford government also delayed the implementation of laws which were set to come into effect on July 1 which would have banned vaping everywhere smoking is banned. The premier’s office released a statement saying the new government wants to first analyze vaping as a potential “smoking cessation tool.” The previous Liberal government argued that vaping was simply a gateway to smoking cigarettes.
Firing and hiring
Ontario’s chief scientist, Molly Shoichet, was fired. She was the province’s first chief scientist appointed by the former Liberal government. The premier’s office did not give a reason for the firing, but said they would be looking for a “suitable replacement.” NDP MPP Peter Tabuns responded by saying, “The people of Ontario deserve to know why this decision was made and why it was done in secret.” Ford also fired Ontario’s chief investment officer and the premier’s business officer. Analysts say this is being done in an attempt to erase the liberal’s legacy.
At the same time, the PCs hired Dr. Rueben Devlin to be the Chair of the Council and the Special Advisor on Healthcare and Ending Hallway Medicine with an annual salary of $348,000.
Cut $100 million in school repair funds
Early this week, reports emerged that the province was cutting $100 million in funds for school repairs. The cut came as a result of last week’s ending of cap and trade in Ontario. The $100 million was a result of the Greenhouse Gas Reduction Fund.
Cancel writing sessions for Indigenous curriculum update
The Ministry of Education confirmed early this week that writing sessions to update the education curriculum to better reflect the needs and struggles of Indigenous people were cancelled. However, the ministry said this occurred “with no direction from the minister of education.” The Ministry of Education says it continues to work to meet the curriculum revisions as laid out in the Truth and Reconciliation Report.
Scrap sex-ed curriculum
The premier’s office announced Wednesday that the province would be scrapping the revised sex-ed curriculum that was rolled out in 2015. This was one of Ford’s main campaign promises. The PC government said the province would be reverting back to the 1998 curriculum. Opponents of the sex-ed curriculum applauded the decision, while others suggested the province was going backwards. Leader of the Official Opposition Andrea Horwath said, “Going backwards in terms of keeping our kids safe and giving them the information they need to stay safe is not the right direction for the kids of this province.”
Fire the ‘6 million dollar man’
In keeping a key campaign promise, Premier Ford announced Wednesday that he had removed the board of directors at Hydro One and, in bowing to pressure, the CEO of Hydro One Mayo Schmidt “retired.” At a press conference Wednesday afternoon – Ford’s first since taking office – he said, “I said over and over and over again on the campaign trail the CEO of Hydro One and the board will be gone. I’m happy to say today the CEO and the board of Hydro One, they’re gone. They’re done.” Hydro One said Schmidt will receive a $400,000 payout in lieu of post-retirement benefits and allowances. He was earning a salary of approximately $6.2 million per year.
insauga's Editorial Standards and Policies