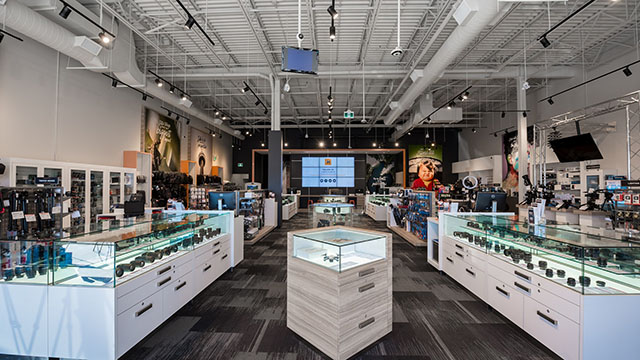 With the holidays fast approaching, you might be searching for a perfect gift for a shutterbug or camera enthusiast in your life. You might also be in the market for a quality camera yourself, one that will truly do your family and holiday party photos justice.

For that reason, you might be thrilled to hear that popular camera store Henry’s, a Canadian family-owned business that was founded in 1909, is about to celebrate the upcoming grand opening of its innovative new Heartland Town Centre store in Mississauga on November 4. What’s even more exciting still is the fact that this store boasts the brand new look and feel that Henry’s clients have only been able to experience at the brand’s exceedingly popular Oakville store.

Although the grand opening is coming, the store–which has replaced the old Henry’s formerly located in the Eglinton and Hurontario area–has been serving customers since the beginning of the month.

“We opened at the beginning of October and have closed down our Hurontario and Eglinton store and moved all of the products and staff to the newer, bigger and better location at Heartland Town Centre,” says Jeff Tate, Vice President, Marketing and eCommerce with Henry’s.

The store, which is bigger and brighter than its predecessor, also offers more parking and an incredibly convenient location, as it’s situated right across the parking lot from the Winners in the popular power centre.

This bright and airy space, which represents a stylish rejuvenation of the trusted and beloved brand, will wow customers who are used to Henry’s previous look.

“It couldn’t be more different from the store it replaces – with the exception of the great staff, service and products of course,” says Tate. “The store has a 100 per cent new format, an all-new way to look at and shop products and a bright modern open concept design that features large photos from Canadian photographers in the community, some of whom are our customers and some are our staff).” Customers who want a more immersive experience might also be excited to check out the store’s “shooting gallery” for video. In the gallery, customers will find multiple camera setups with a plethora of accessories they can try out themselves. Staff members will also be available to provide instruction on how the equipment works.

“We kept everything that was good from the old location and added and improved upon it. I’m confident when I say I believe we have the best specialty camera store concept in Canada,” says Tate.

And although the store has only been open for a few weeks, Tate say customers have been enjoying the experience.

“Everything has been so positive and we are extremely happy with the response.”

For customers interested in products–especially with Christmas being just a couple of months away–the array of merchandise won’t disappoint.

“There are so many options now that people are taking more pictures than ever before and it’s so easy to share them on social media,” says Tate. “Also, YouTubers and content creators are loving taking a camera and ‘rigging it up’ to use for videos with all kinds of add on accessories.”

So, what products does Tate expect to see fly off the shelf?

“Full 360 degree cameras are really interesting and I think they will reinvent the way we experience a moment.”

As for what equipment is trending right now, Tate says everyone should be able to find something that meets their needs.

“It’s about picking the camera and setting it up the best way for you and your needs,” he says. “There are so many different ways you can use a camera and just like there is a personal style that comes with creativity, everyone has a personal preference when it comes to gear.  The great part about Henry’s is that we will help you figure out what works best for you and we carry all the gear you need.” And while this brand new location is only the second one to embrace the brand’s new look, the rejuvenated stores are expected to keep popping up in the GTA.

“We just opened one in Woodbridge and there will be more,” says Tate. “This is the new look and feel of Henry’s.”

Tate says that, when it comes to deals and specials, Henry’s always has something going on. However, shoppers who want to check out the upcoming grand opening are in for a treat.

“The official grand opening event will have a ton of deals, door crashers and giveaways,” says Tate. “Also, we will be doing a ‘spend more save more’ promotion the same day which will take an extra amount off your total invoice and those savings go higher and higher depending on how much you spend.”

Ultimately, if there’s one thing that the popularity of Henry’s makes clear, it’s that the traditional camera isn’t going anywhere and is just as exciting as ever.

“A lot of people take pictures with their cell phones and it’s great that more people are getting into photography, however a dedicated camera can do so much more and can take an even better picture/video – you’d be surprised at the difference.”

That said, Henry’s can help shoppers enhance their cell phone camera prowess too.

“However, if you do want to up your cell phone photography game as well, we sell accessories and attachments to help with that too. We’re photographers and videographers too – we live and breathe it every day.”

To learn more about the new store and grand opening, click here.