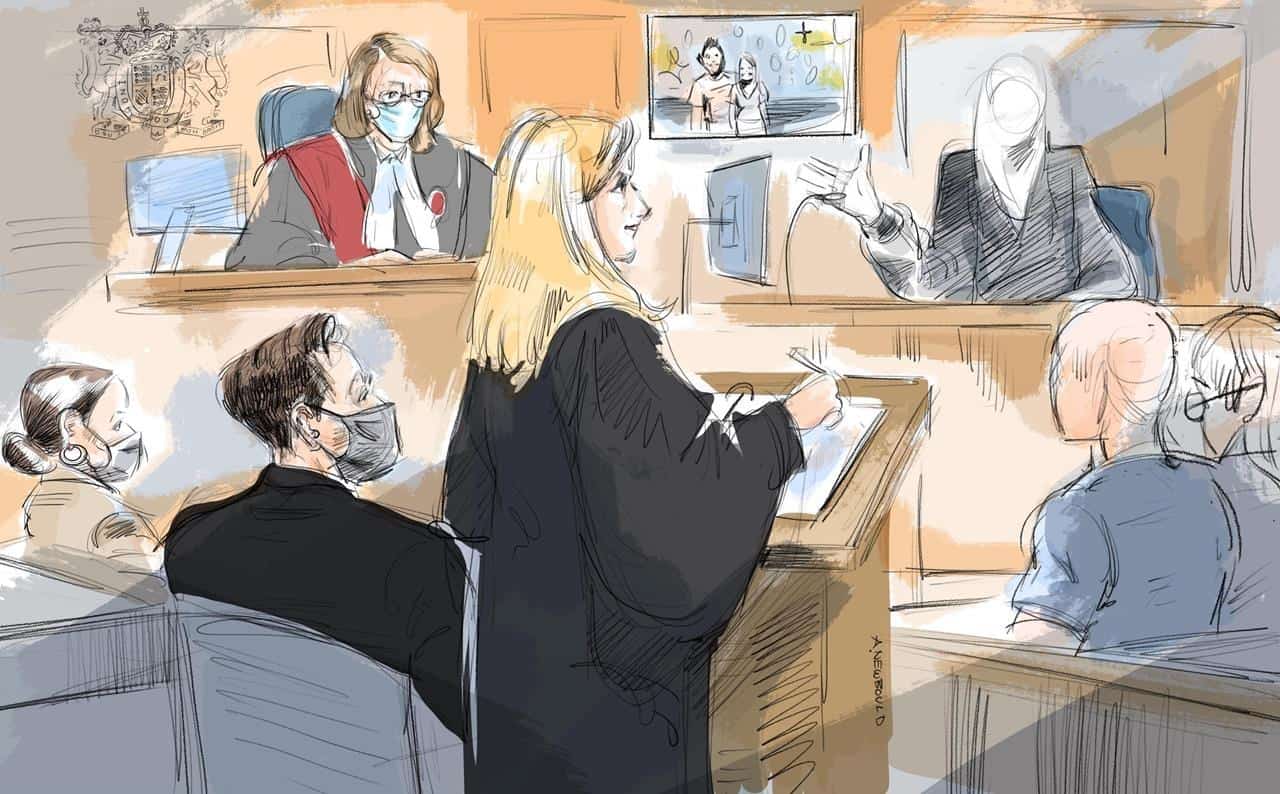 A young woman who alleges she was sexually assaulted by Canadian musician Jacob Hoggard when she was a teenager told a Toronto court the singer turned into an unrecognizable “monster” after bringing her to his hotel room.

The woman, who is one of two complainants in Hoggard’s sex assault trial, at one point broke down in tears Friday as she described her encounter with him on Sept. 30, 2016.

She told the court she tried to fight off Hoggard as he began to kiss her in his Mississauga, Ont., hotel room, where he had taken her after sending a limousine to pick her up from a friend’s house in her hometown north of Toronto. She was 16 at the time.

She said he pushed her onto the bed as she tried to back away, held her down and undressed her and took his own clothes off. Then, she said, he repeatedly raped her vaginally and orally, and attempted to do so anally, over several hours.

At various points, she testified, Hoggard pushed her face into the pillows so she couldn’t breathe, spit in her mouth and slapped her, called her a “slut” and a “whore,” and told her it was what she deserved. He didn’t use a condom, she said.

“I’m … lying there crying on my back and telling him to stop and he wouldn’t stop,” she said tearfully, adding that she tried to break free on several occasions but was overpowered. Her mind eventually “shut down” as she focused on surviving the incident, she testified.

For months earlier, and up until they reached the hotel room, Hoggard had been affectionate and caring, stressing that he saw a future with her and she should trust him, the woman said in her testimony. This sudden change felt like a “betrayal,” she said.

“That’s where the biggest shift was,” she said. “This person who makes you believe this fairy tale about love and romance and softness and gentleness (turned in) to this monster of a human who has no compassion, no empathy.”

Prosecutors allege Hoggard, the frontman for the rock band Hedley, violently raped two women after bringing them to Toronto-area hotels in separate incidents in 2016. Both complainants had travelled from out of town to see him. Neither can be identified under a publication ban.

An agreed statement of facts says Hoggard had a “sexual encounter” with each of the complainants on the days they came to his hotel.

The singer has pleaded not guilty to two counts of sexual assault causing bodily harm and one of sexual interference, a charge that refers to the sexual touching of someone under the age of 16.

On the stand Friday, the woman said she was able to grab her cellphone after Hoggard went to the bathroom. She recalled texting a friend who knew she was meeting the singer, and asking that friend to call pretending to be her work.

Once Hoggard emerged from the bathroom, she told him she had to go to work early and he called the limo driver to take her back, the woman said.

As they waited, she said, Hoggard tried making conversation and joking with her, talking about a recent vacation and “slowly trickling back to the person that I recognize,” she said.

When they parted, the musician said he was glad she had come and hoped to see her again, she testified. Meanwhile, she said, “I’m thinking I just want to get out of here, don’t touch me, don’t talk to me.”

The woman said Hoggard messaged her while she was in the limo but she blocked him on all platforms. They never spoke again, and she never went to another Hedley concert, she said.

The driver took her to her friend’s house, she said. The woman said she told her friend what happened, and her friend suggested she take a shower.

As she was getting undressed, she noticed her underwear was “full of blood,” the woman said. She had bruises on her back, buttocks and legs and was sore in various places, she said.

She waited more than a week to tell her mother what had happened and went to the hospital a few days after that, she said.

The woman said she didn’t initially report it to police because she simply wanted to move on, but that “didn’t work,” and she experienced flashbacks, panic attacks and nightmares. She eventually reported it in 2018.

Under cross-examination, the woman acknowledged she could have left the hotel room while Hoggard was in the bathroom. But she said she didn’t know how to get back home and it didn’t occur to her to call a taxi, since she had never called one before. She was also worried about Hoggard noticing that she was trying to leave, she said.

The defence also suggested she could have called someone else, or even 911, but the woman said she didn’t want to involve police at the time. The friend she texted was one of two people who knew where she was, and the person most likely to respond quickly, she said.

Defence lawyer Megan Savard further suggested the woman screenshotted some of the text messages she exchanged with Hoggard and turned them over to police, but didn’t include messages that would have shown she came to Toronto to have a sexual encounter with Hoggard.

The woman denied that suggestion, saying she only screenshotted early messages out of excitement, and that after the Sept. 30 incident, she couldn’t bear to look through their conversations anymore.

Earlier in her testimony, the woman described meeting Hoggard at age 12, and starting to communicate directly with him after a meet-and-greet event when she was 15.

The woman said Hoggard also sent her romantic messages, saying he loved her and saw a future with her.

A few weeks after they began texting, he arranged for her and two friends to come see Hedley in Toronto and gave them backstage passes, she said. It’s alleged that he groped her buttocks while backstage.

The young woman told the court they then tried to arrange a day of shopping and sightseeing in Toronto a couple days later, but the plan fell through.

Over the summer, she and Hoggard kept in touch, and he even called to wish her a happy birthday when she turned 16, she testified.

They eventually rescheduled their meeting for a day in September, and the woman said she expected they would stick to the original plan of shopping, lunch and sightseeing, adding she thought the other band members and their manager would be present.

Based on the nature of some of their texts, she thought there was a possibility Hoggard would “try something,” but didn’t anticipate anything beyond an attempt to kiss her, she told court.

Even so, she thought that if she said no, “he would respect that” and their day would go on as planned, she said. When she was brought to his hotel, the woman said she believed they were only meeting there and would be going elsewhere.

The trial resumes on Monday.