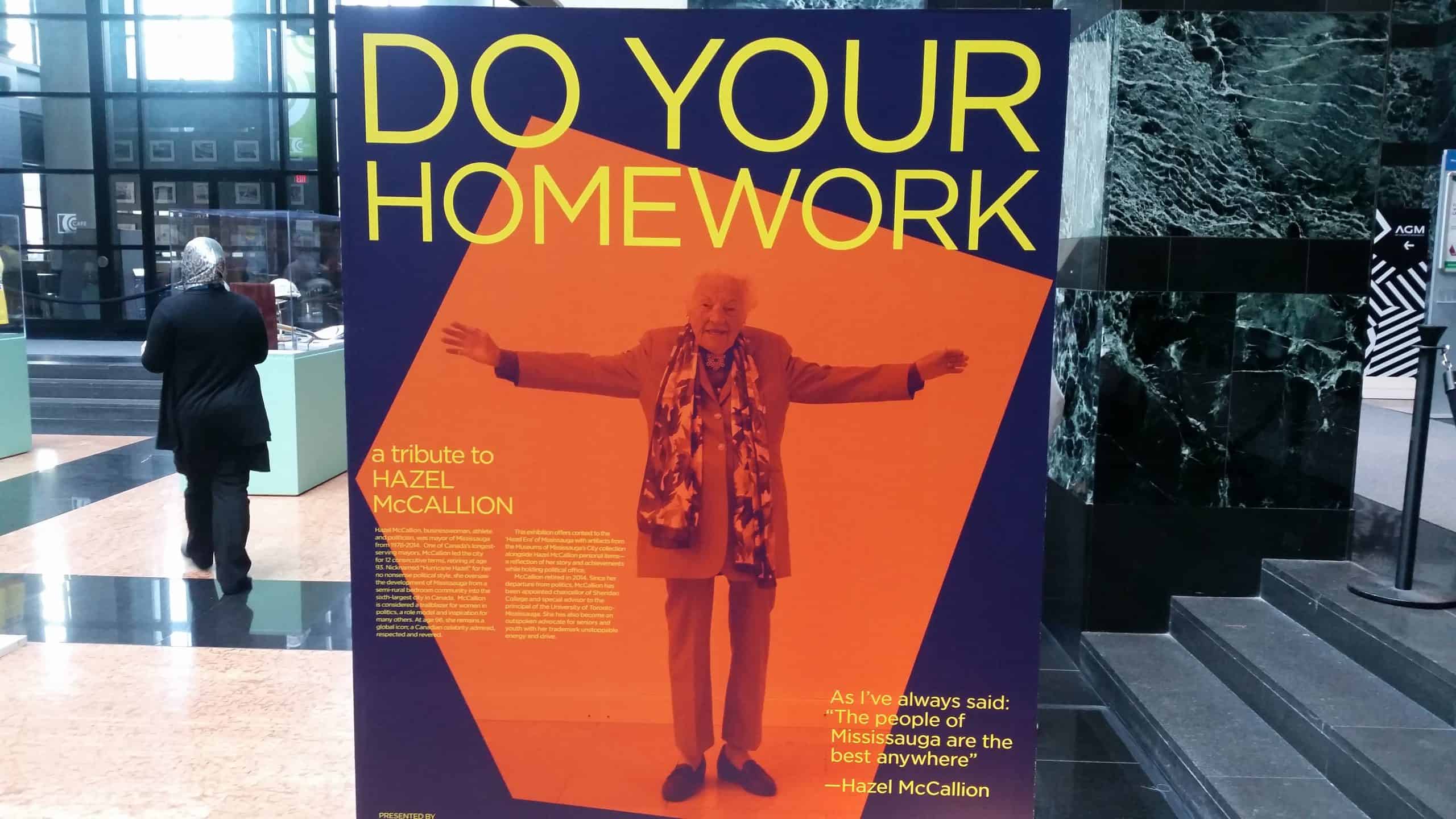 A few months ago it was announced that as part of Canada’s 150th anniversary celebrations, Mississauga’s Culture Department was putting together an exhibit honouring Hazel McCallion’s long political career entitled “Do Your Homework.” The exhibit was unveiled this past week and will be on display in the Great Hall of Mississauga Civic Centre until April 26.

Here are some of the many items on display in the Great Hall in the Civic Centre: 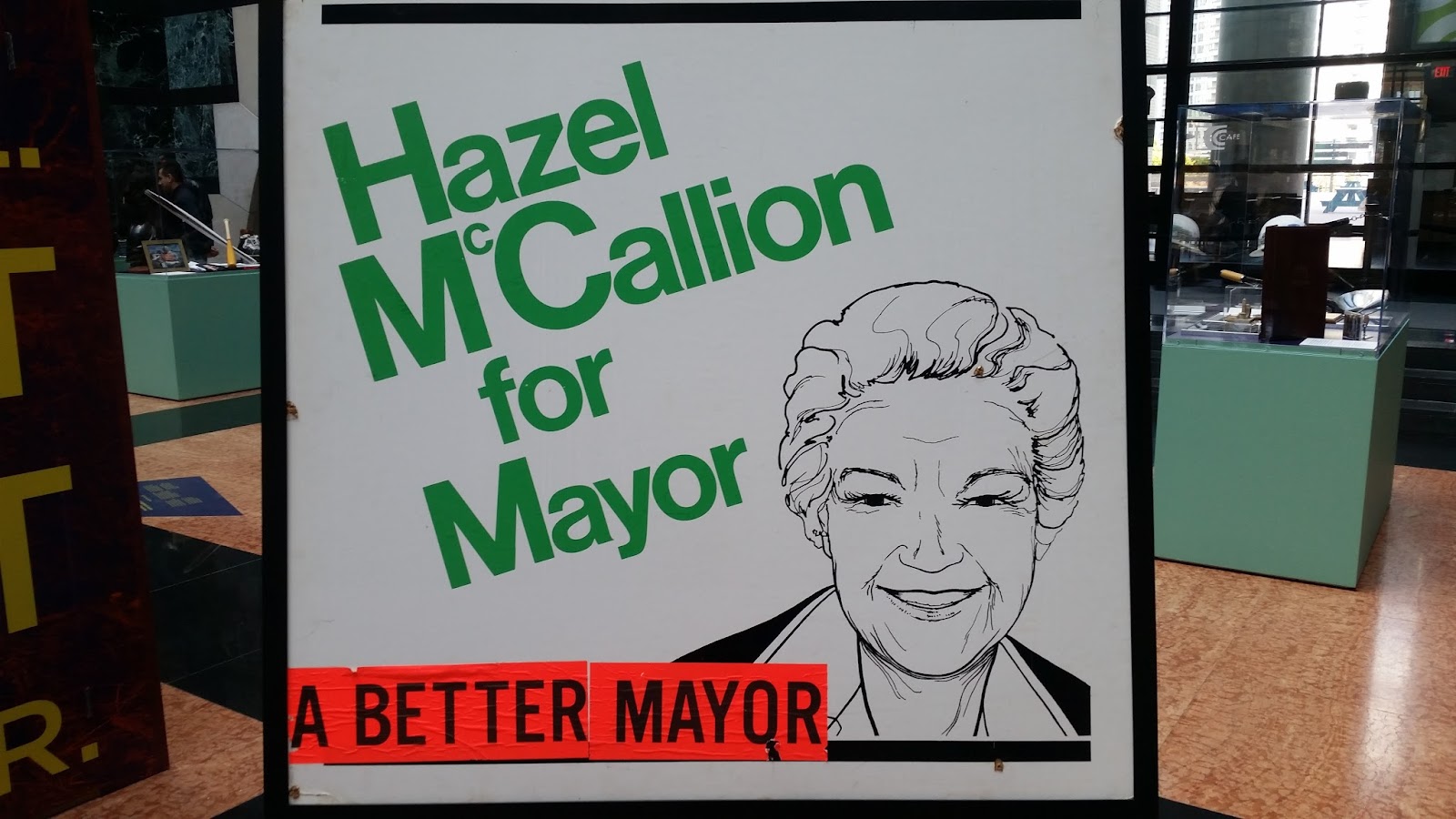 This was the exact election sign used by McCallion’s campaign volunteers during her successful run to be Mississauga’s mayor in the 1978 election. Her opponent at the time, the incumbent Ron Searle, used “A Good Mayor” as his campaign slogan and that subsequently inspired Hazel’s campaign slogan. Considering that she served over 35 years and Searle was in there for only one two-year term, I guess Hazel was indeed “The Better Mayor.” 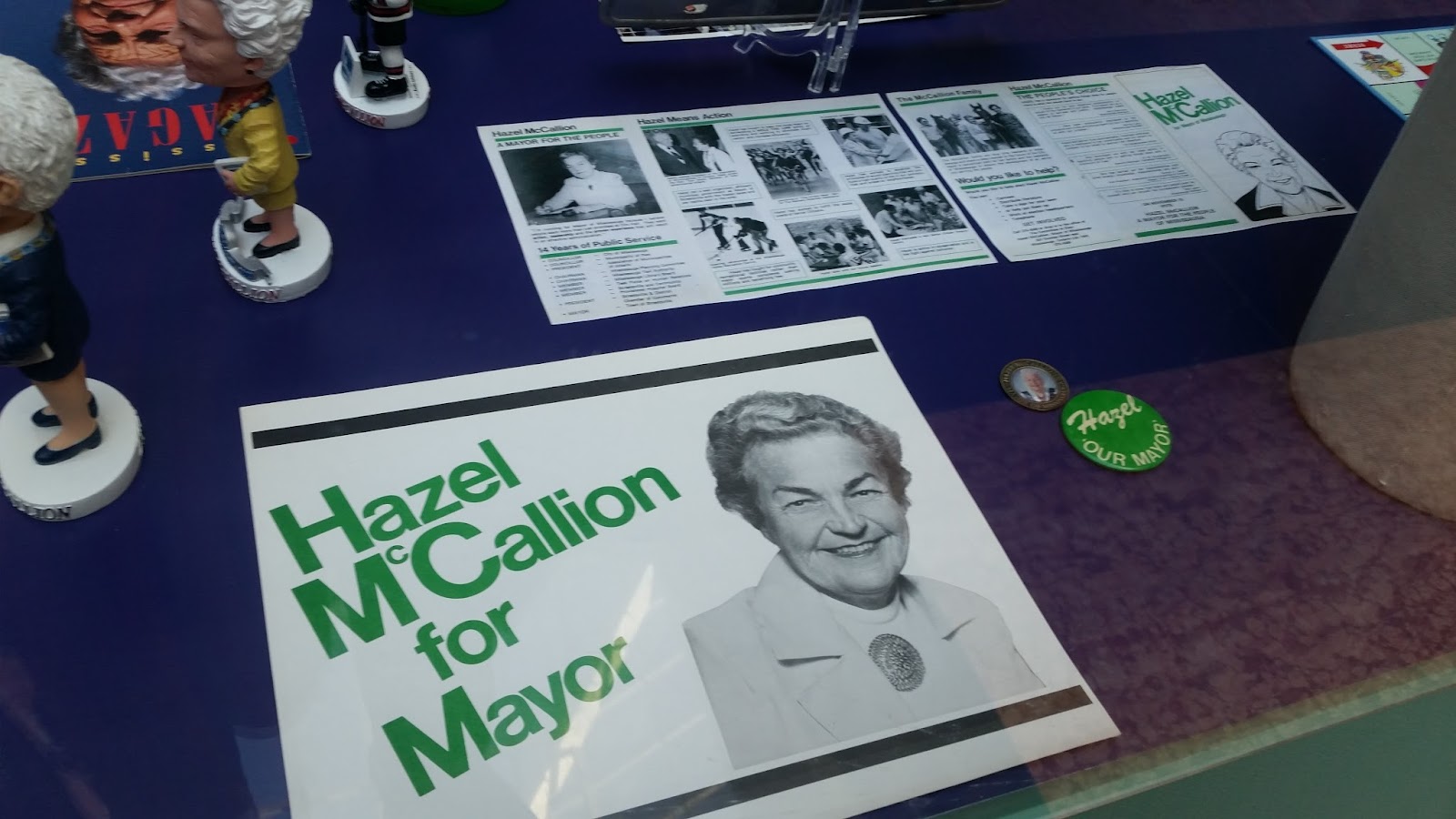 Some more of McCallion’s campaign materials from 1978. As Hazel basically stopped running actual re-election campaigns by the late 1980s, these items are indeed very rare and valuable. 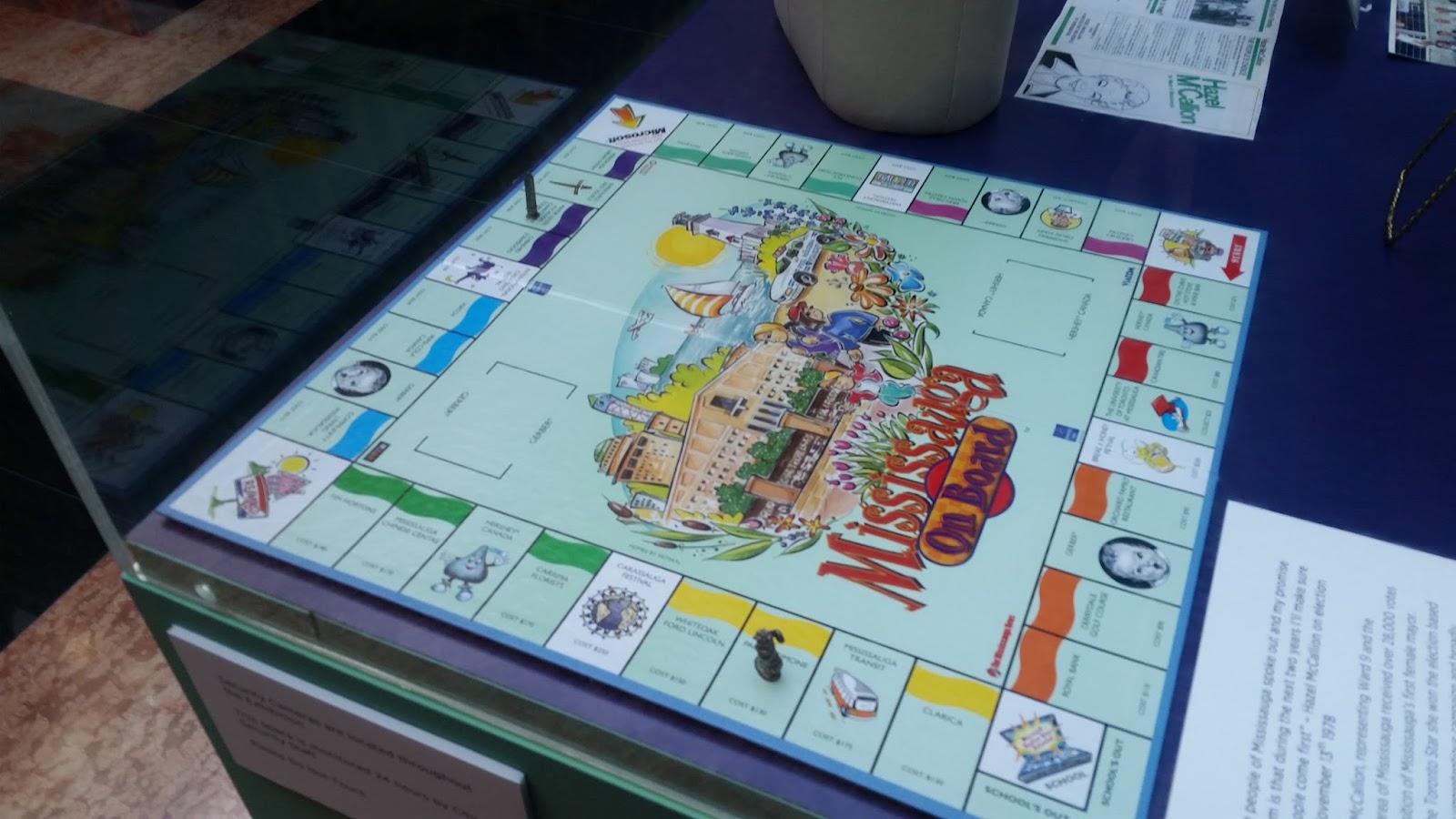 A Mississauga-based Monopoly board game 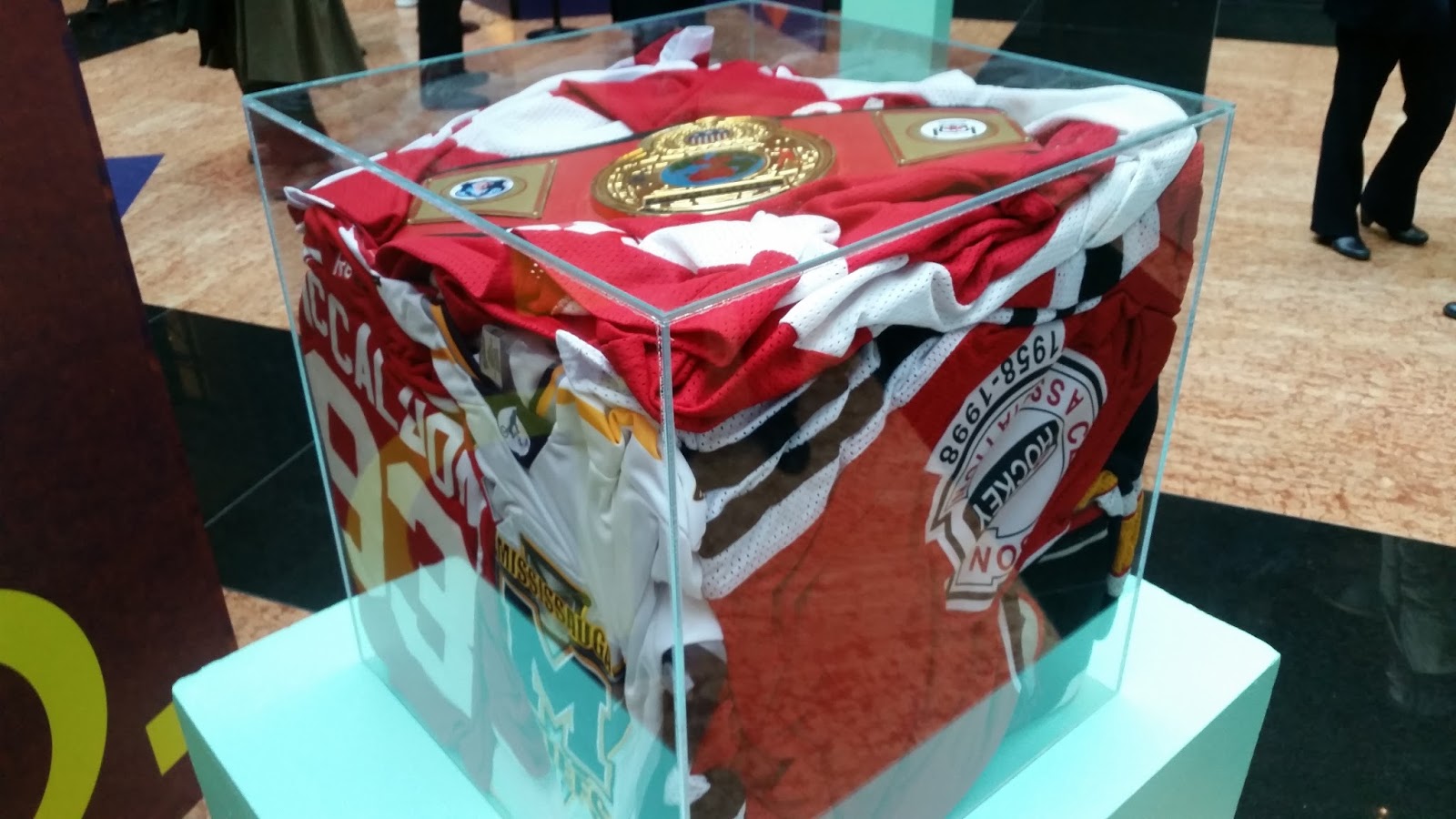 McCallion was an avid hockey player, and currently has a position with the Ontario Women’s Hockey Association. This is a glass cube stuffed with all the hockey jerseys she collected over the years, topped off with a custom-made Championship Belt from the Canadian Boxing Association. 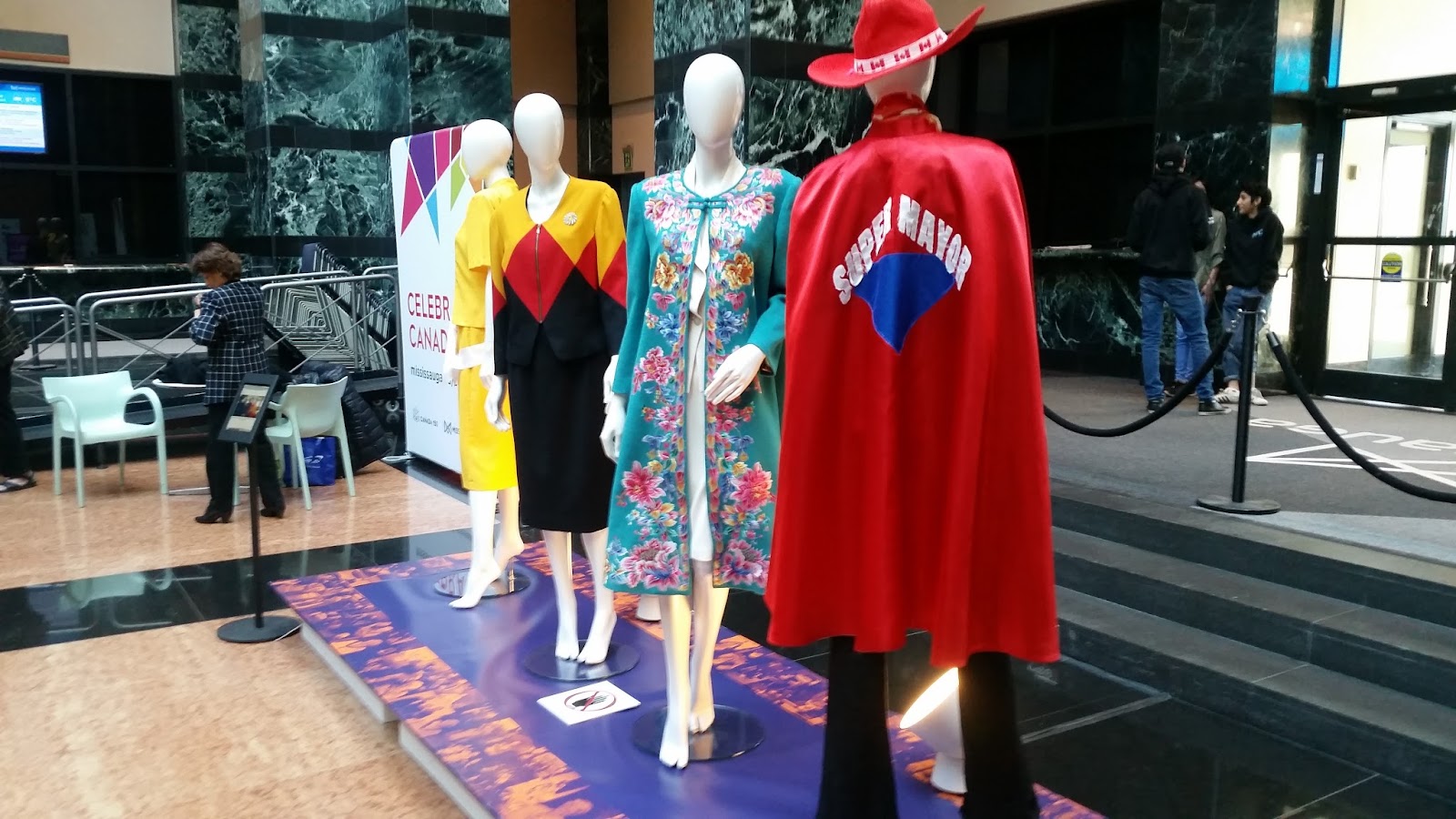 Some of McCallion’s outfits throughout the years. Yes, that is a red cape emblazoned with the words “Super Mayor” on the back. Hey, it’s Hazel; she pretty much wears whatever she feels like. If you think this is flamboyant, you should see what she wore on Canada Day. 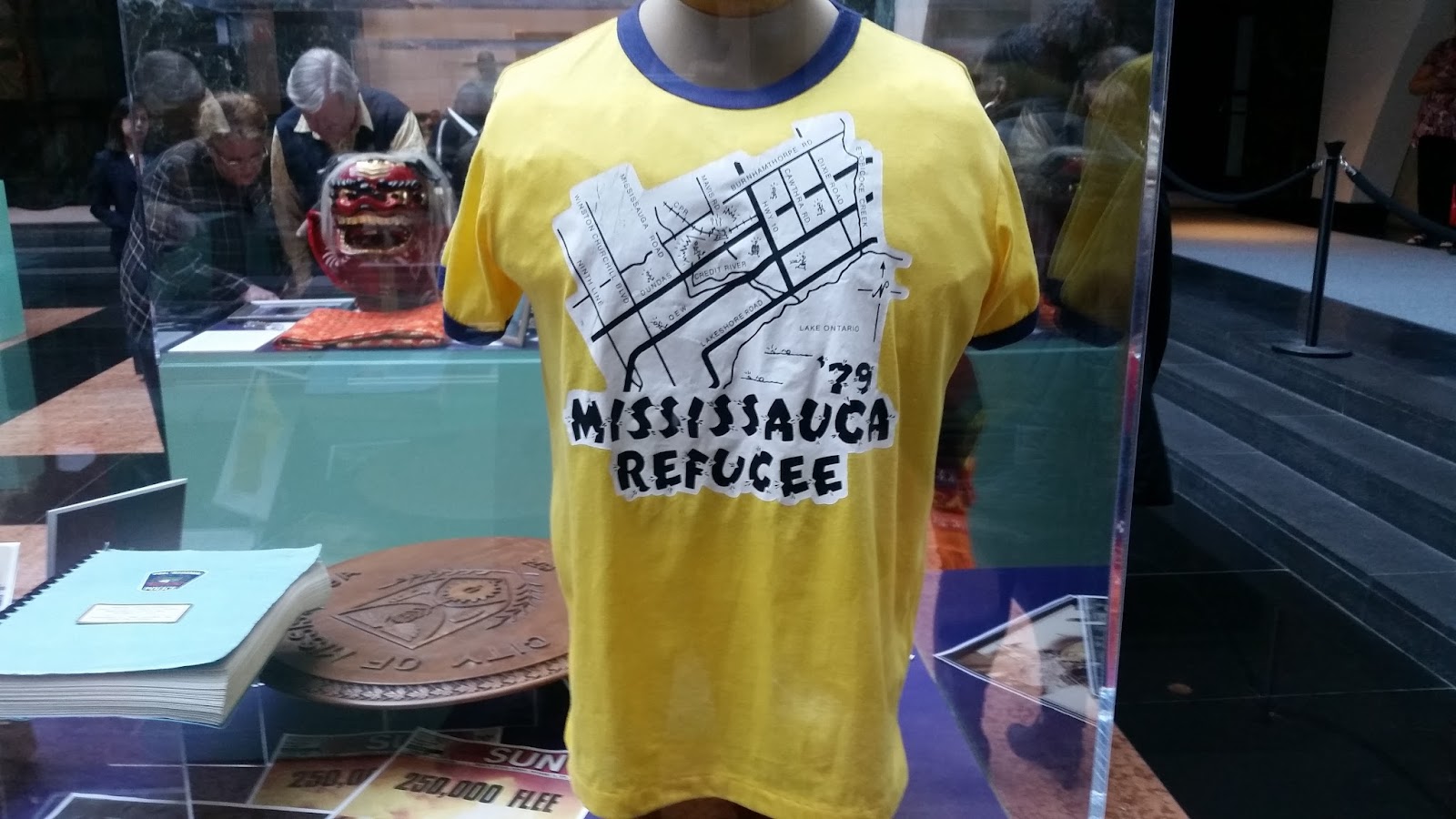 Long before we welcomed refugees from other lands, Mississauga residents themselves became refugees during the 1979 train derailment when some 200,000 residents had to evacuate the city. Here’s a promotional t-shirt from that time, perhaps in some attempt to make light of the situation?

There was also a massive cube in the middle of the Great Hall where all these items were on display, showing in giant block letters some of McCallion’s more well known quotes: 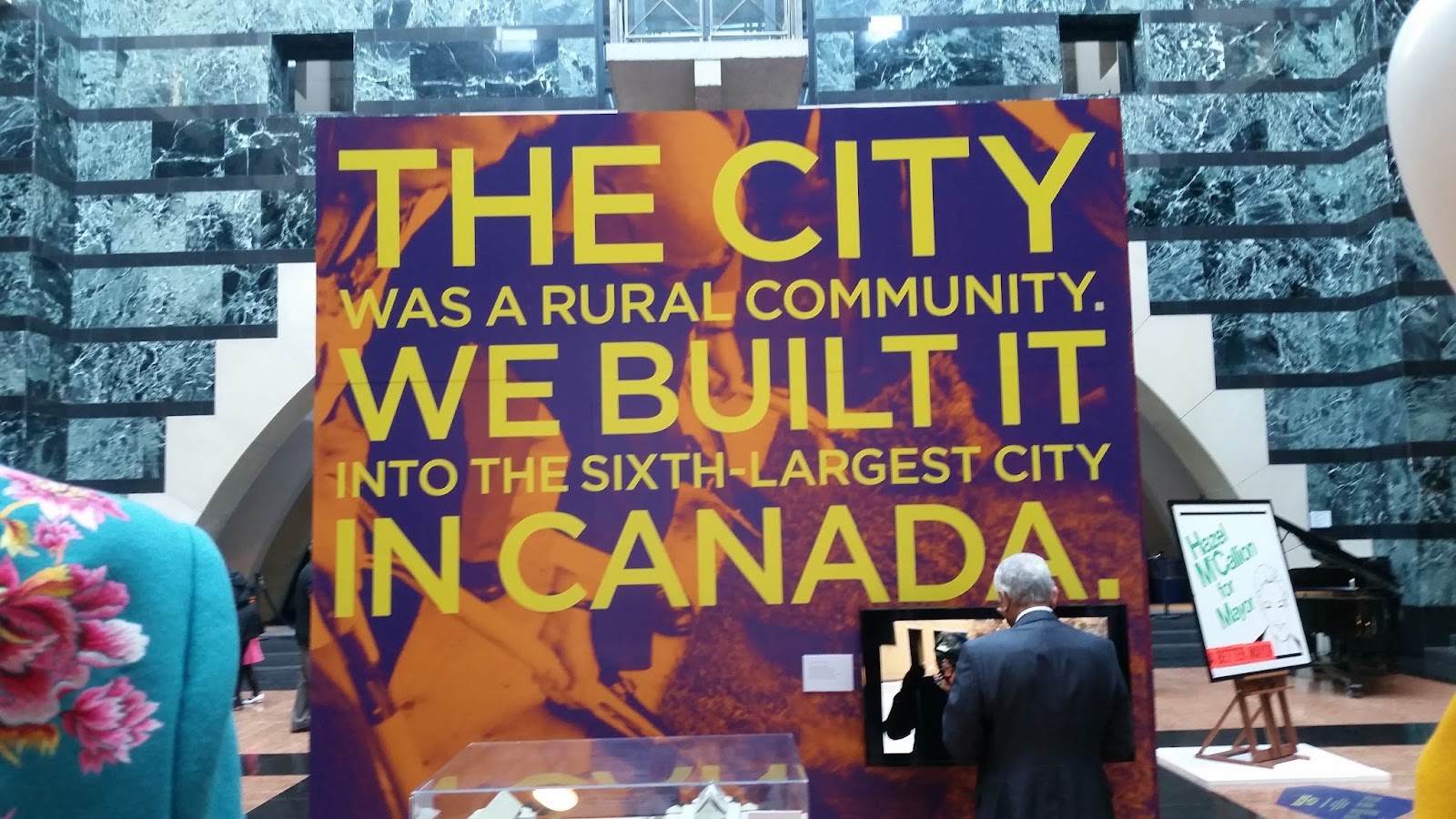 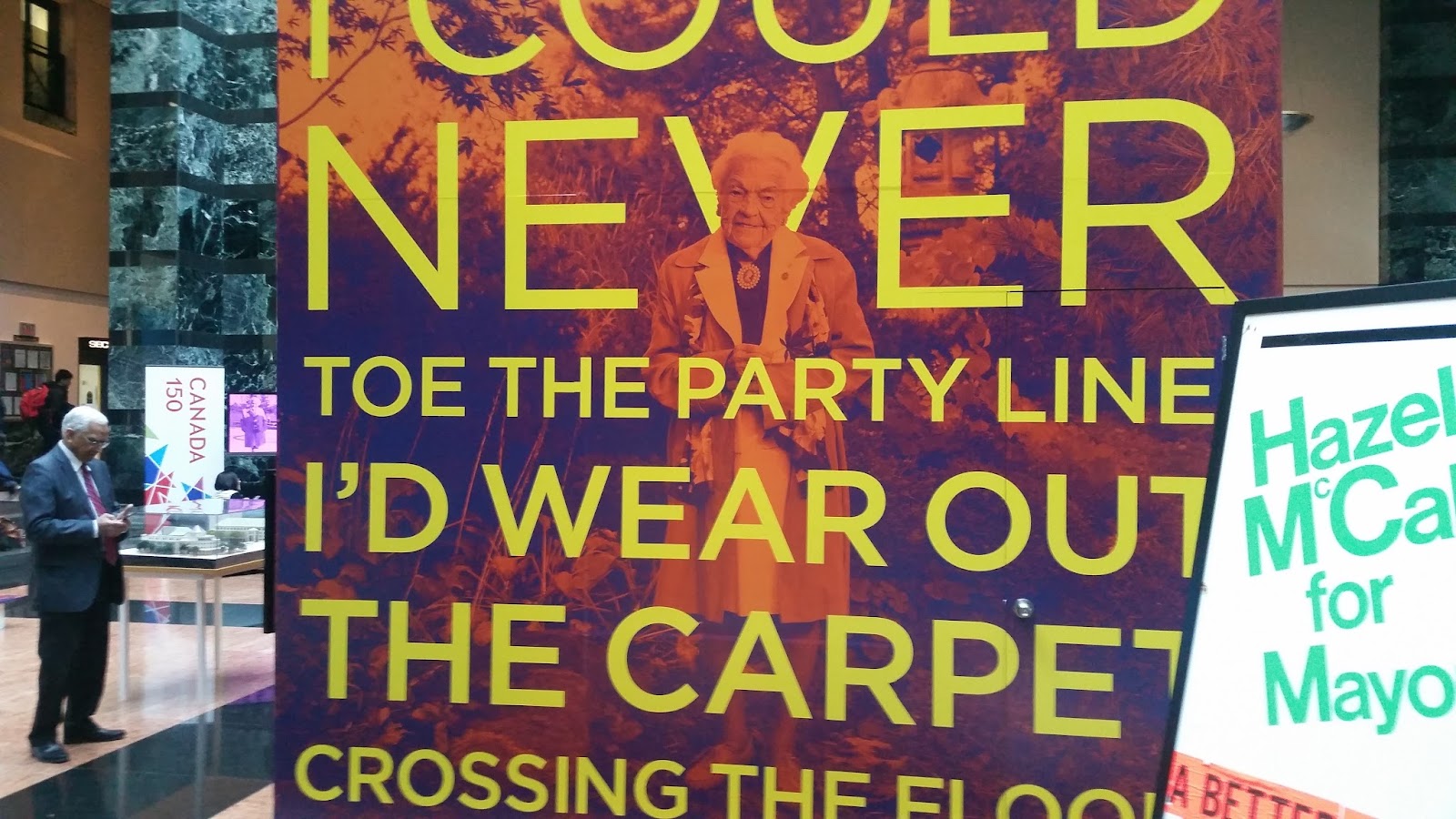 This says “I could never toe the party line; I’d wear out the carpet crossing the floor,” in response to why Hazel didn’t run for premier or prime minister. 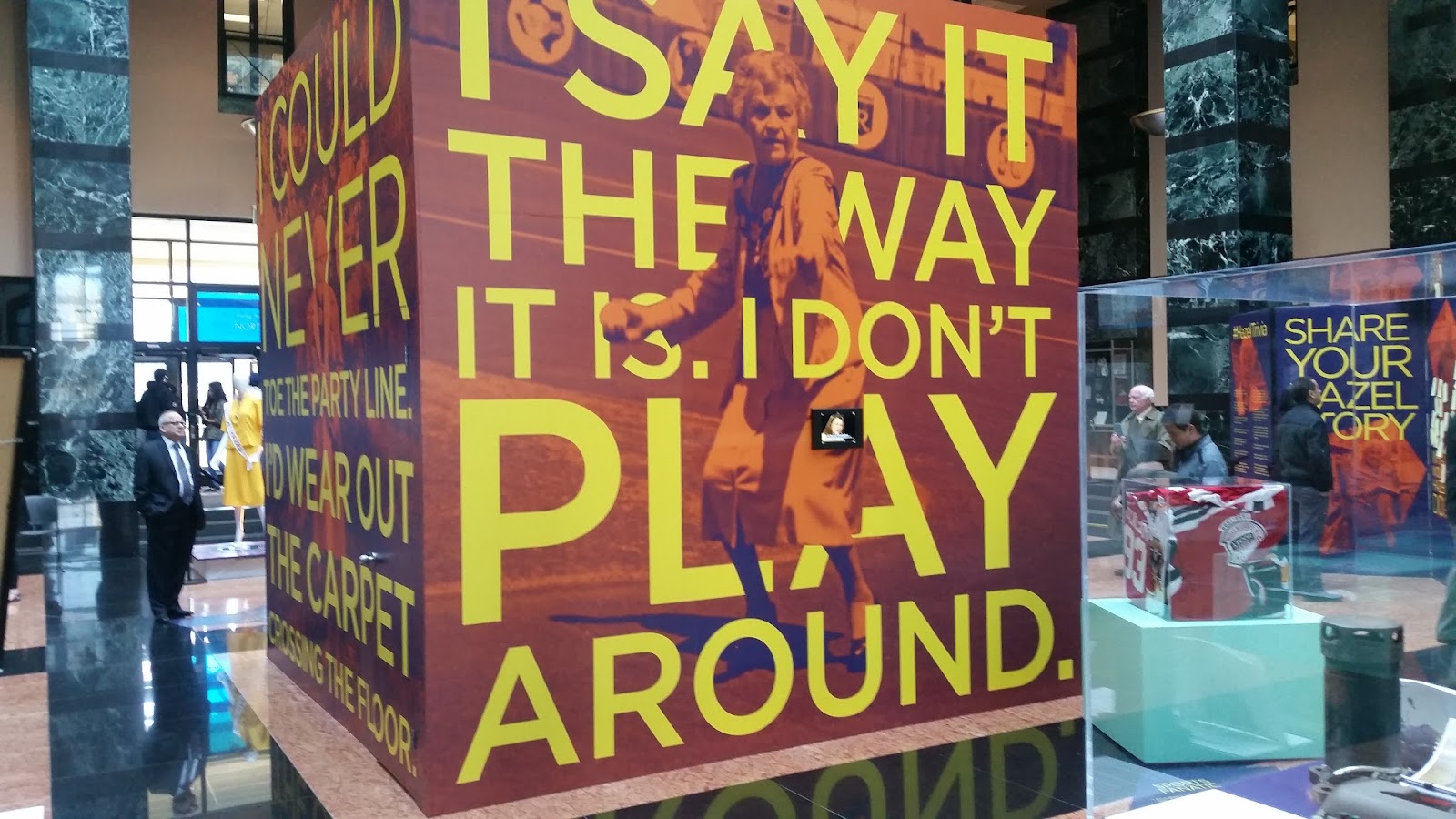 I’ll just leave you with the Hazel line that brought all this together (yes, there is Hazel swag, and this tote bag is available for only $8.50). 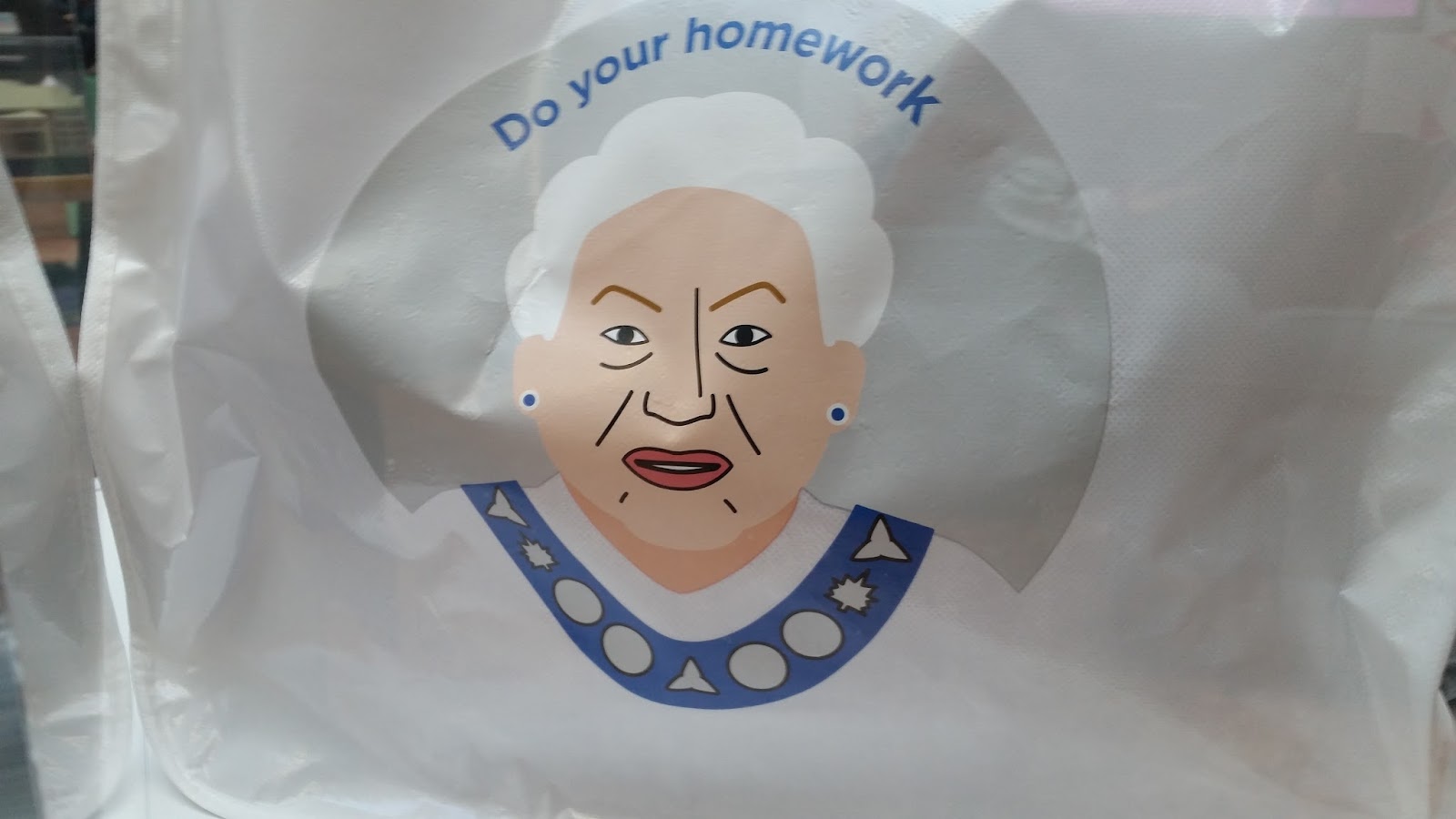