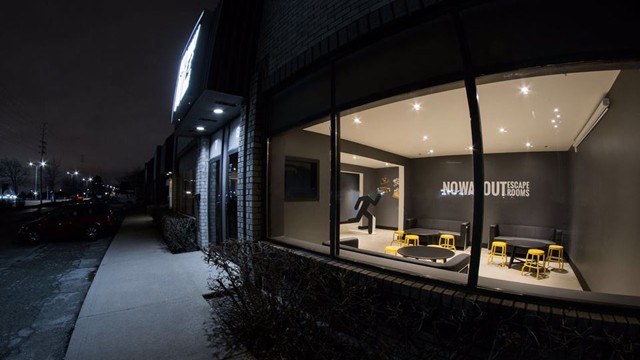 Looking for something a little different to do–perhaps over this long weekend?

Escape rooms have been growing in popularity in North America over the last few years, mirroring the Asian gaming trend initially creating a buzz in countries such as Japan and China. Escape rooms work because they’re both challenging and novel, offering guests the chance to exercise their minds and bodies. For that reason, it’s great when a new company hits the scene that does something a little more unique.

Halloween is months away but haunted house enthusiasts, take note of this address: 13 Sedah Ave. — there are bloody walls and floors, and a 45 per cent chance of getting out.

And it’s right here in Mississauga.

A horror-themed escape room is now open at NOWAYOUT.

The new room recently opened at the Lorimar Rd. facility near Dixie and Derry roads.

Players are locked in a room and have to solve a series of puzzles and escape or complete the room’s mission within a certain time frame.

“We know escape rooms may be old news,” said Wurtz, adding they’ve been taken “to a whole new level.”

He says a van escape is also in the works, slated to open next month.