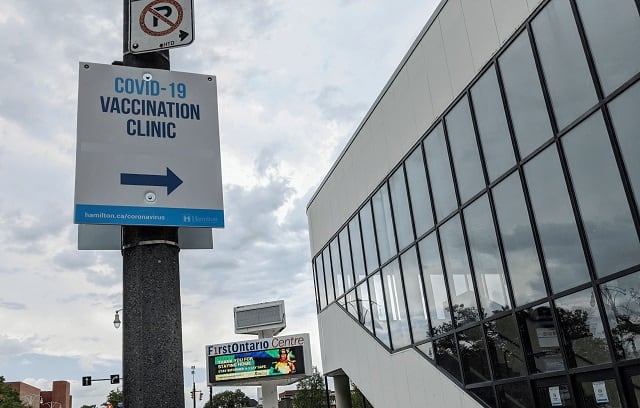 FirstOntario Centre in Hamilton is being used as a mass COVID-19 vaccination clinic until Sunday, Aug. 29.

Hamiltonians took a hard pass on a skating event that offered COVID-19 vaccines, which is one illustration of how the city’s  ‘last mile’ vaccine campaign is as cold as ice.

During a city briefing on Monday (Aug. 22), a questioner of  said that only 14 people attended an event at FirstOntario Centre where people could get vaccinated and skate afterward. It was the first clinic the City of Hamilton, which has Ontario’s second-highest positivity rate and fifth-lowest vaccine completion percentage, has held that stayed open into late-evening hours.

Hamilton’s medical officer of health, Dr. Elizabeth Richardson, has emphasized that COVID-19 vaccine supply is “abundant.” But the 787 shots reported on Sunday marked the lowest single-day total since Feb. 26, early in the vaccine rollout when supply was meagre.

Richardson said the city was staying the course.

“We’re doing what needs to be done to finally get at it,” she said. “We’ve got all sorts of different vaccination options that are available in our community.”

“It’s going to be this way for a while,” she added. “We know that there are some people who aren’t interested in being vaccinated — just as is the case with usual vaccines,” Richardson added “There are some who are waiting to see what’s going on. We are very much saying to those people, ‘The time for waiting is over.’ We do really need to say, going into this fall, with Delta (variant), now is the time to get your first or second vaccine.”

The city reported Monday that 71 per cent of the eligible population has been fully vaccinated, which is 30th of 34 public health units in Ontario. It is also the lowest of any single-tier municipality.

In the past two months, first-dose coverage has only increased from 72.5 per cent to 78.7. The provincial average is 82.2, with centres of comparable size such as Ottawa and Waterloo now north of 85 per cent.

Hamilton had 64 active cases on Monday, which represented one-10th of Ontario’s count of 639. Richardson noted that the largest increase is among residents who are under 40 years old.

“Our case numbers do continue to rise,” she said. “Particularly, cases are rising sharply in those 18 to 39 years of age.”

Enticements to get vaccinated include a walk-in clinic over the next two days at Tim Hortons Field (64 Melrose Ave. N.) where people can stay to watch the Hamilton Tiger-Cats practice. Tuesday’s clinic is from 10:30 a.m. to 2 p.m., and Wednesday’s is from 10:30 a.m. to 1 p.m.. Attendees will get two tickets to any 2021 Forge FC regular season home game.

Clinics have also been added in high schools as the start of the 2021-22 school year approaches, and the clinic at St. Joseph’s hospital (100 West 5th St.) is staying open until Sept. 3.

In any event, there is little indication of the city moving out of Step 3 of Ontario’s reopening plan any time soon.

“We expect to remain here for a while,” Mayor Fred Eisenberger said.