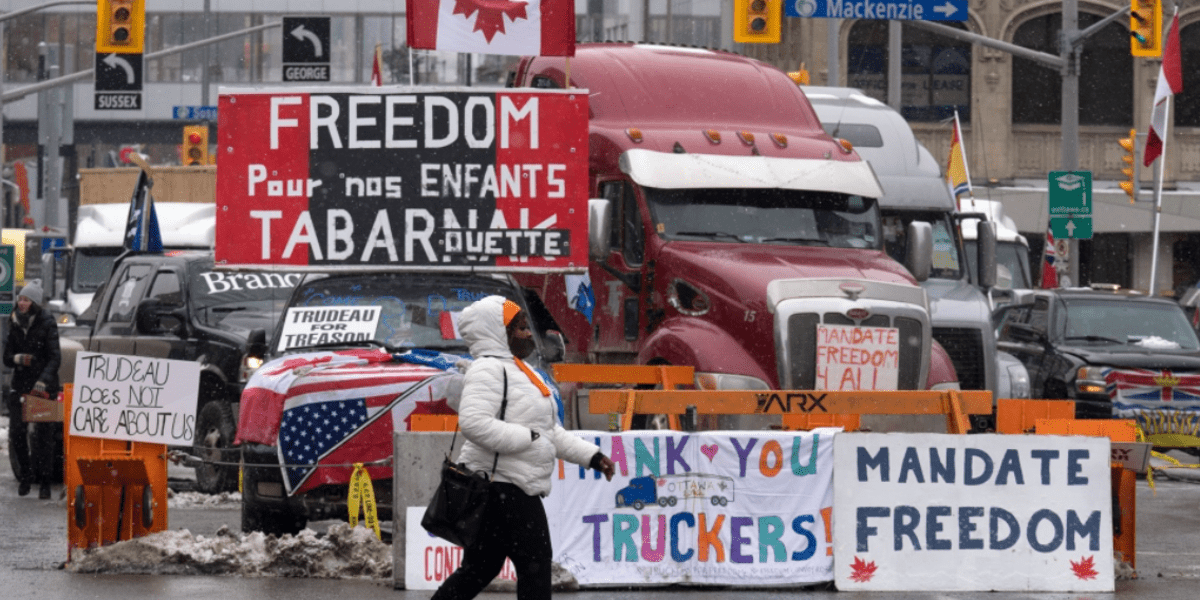 A woman crosses the street in front of vehicles parked as part of the trucker protest, Tuesday, Feb. 8, 2022 in Ottawa. (THE CANADIAN PRESS/Adrian Wyld)

“These illegal blockades and occupations are inflicting harm and disrupting immediate and surrounding communities,” said Eisenberger. “People are unable to access essential services or leave their house for work.”

Eisenberger reiterated his support for peaceful protests but says this protest is clearly not peaceful.

“While everyone has the right to peacefully protest it is clear this is not peaceful. This behaviour is reckless and dangerous,” he added. “Now is the time to end public disorder and lawlessness. I support the action by all orders of government to end the occupation and defend peace, order and good,” government.”

In a joint statement from the Ontario mayors, they call the protests “damaging.”

Ontario’s Big City Mayors stand in solidarity with the Mayors of impacted cities and condemn the irresponsible and damaging actions of the convoy protestors. OBCM supports the right to a peaceful protest but what is happening in Ottawa and at the Ambassador Bridge is unacceptable. Public disorder and lawlessness must end. Workers are being laid off, critical industries such as the auto sector are being disrupted, residents are being forced to leave their homes, and illegal and dangerous actions are continuing. Experts are now suggesting that the economic impacts on goods and services could last for months, and we believe Ontario businesses have suffered enough.

Ontario Premier Doug Ford declared a state of emergency Friday in response to ongoing blockades in Ottawa and Windsor, warning of “severe” consequences for protesters who don’t leave.

Ford said he will enact orders making it “crystal clear” that it is illegal and punishable to block and impede the movement of goods, people and services along with critical infrastructure, including international border crossings, 400-series highways, airports, ports, bridges and railways.

Fines for non-compliance will be up to $100,000 and up to a year imprisonment.

The announcement comes as a protest against COVID-19 measures has immobilized Ottawa’s downtown core for nearly two weeks while another on the Windsor side of the Ambassador Bridge has blocked Canada-bound vehicles from using the key border crossing for days.

The past two years have not been easy and frustrations have reached a boiling point for many Canadians, Ford said, but the illegal occupations must end.

“To those who have attempted to disrupt our way of life by targeting our lifeline for food, fuel and goods across our borders, to those trying to force a political agenda through disruption, intimidation and chaos, my message to you is this — your right to make a political statement does not outweigh the right of hundreds of thousands of workers to earn their living,” Ford said at a news conference.

This evening, I had several meetings that were focused on the illegal blockades and occupations happening across the country. They’re harming the communities they’re taking place in – and they’re hurting jobs, businesses, and our country’s economy. More below ⤵️

Ford also said public health restrictions in response to COVID-19 have helped protect hospitals from collapse and saved many lives.

He noted that Dr. Kieran Moore, the province’s chief medical officer of health, is working on a plan to end Ontario’s vaccine certificate system. But that plan has been in the works since well before the convoy protests began, Ford said.

“I base it on health. I base it on science. Dr. Moore has clearly said it’s time to move forward. I look forward to Dr. Moore’s measures and recommendations, and will continue to work with Dr. Moore to reopen safely and cautiously.”

Ford said the measures announced Friday will not impede the right to peacefully protest but will provide more tools to help end the “illegal occupation” of Ottawa and the Ambassador Bridge.

Ontario will also provide “additional authority to consider” stripping the personal and commercial vehicle licences from people not complying with the orders, but details on what form that would take were not immediately available.

The Ontario Provincial Police has provided additional resources to the police in Ottawa and Windsor, Ford said, and the province is going after the convoy’s funding.

The Ontario Superior Court granted a request Thursday from the Ontario government to freeze protesters’ access to millions in donations raised on the fundraising platform GiveSendGo.