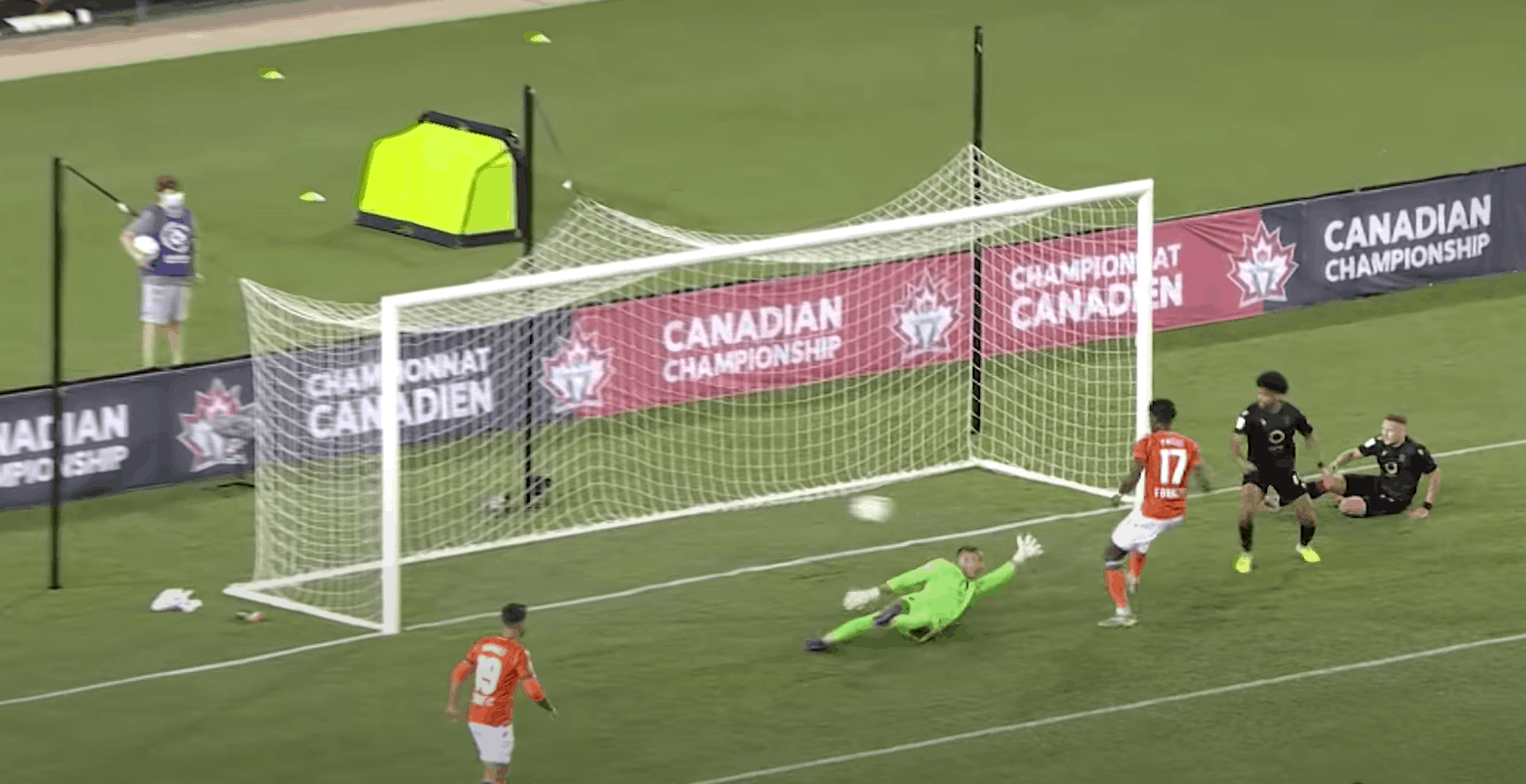 Forge FC Hamilton defeated Valour FC to advance to the semifinals of the Canadian Championship on a controversial winner.

Forge FC Hamilton is the first club through to the semifinals of the 2021 Canadian Championship after defeating Valour FC 2-1 on Wednesday (Sept. 15).

The hosts, who came into the game on the back of a 2-0 home defeat to York United FC in the Canadian Premier League on Saturday, bounced back at Tim Hortons Field against a valiant Winnipeg side in a matchup that did not go without controversy.

“If I get to the controversial moments, I’ll get fined,” Valour FC head coach Rob Gale said following the game’s conclusion. “The second goal has got to be ruled out, it’s handball, it’s clear as day and then you’ve got a mountain to climb at 2-0.”

“I’m angry at the second goal,” Gale said. “We were by far the better team in the second half, I’m just disappointed that first half we were a little bit placid. It was uncharacteristic from us but when we play the way we want to play, we are a completely different team.”

The defending two-time CPL champions finally recorded their first victory against Valour who, despite winning both previous matchups between the two sides in 2021, have now lost four consecutive matches in all competitions.

Forge opened the scoring through David Choiniere in the 33rd minute before Woobens Pacius extended the lead in the 38th to send the home team to a 2-0 half-time advantage. Valour’s Austin Ricci scored for the visitors in the 60th minute for the final score.

James Grant found Choiniere, whose right-footed effort made it past the fingertips of Matthew Silva before nestling in the back of the net.

“I think first half we were excellent,” Choiniere said. “We created a bunch of opportunities to add that third goal. I think we looked really sharp in the first half; second half we came a bit flat but Valour was pushing too.”

“We’ve been building the same team for three years,” he said. “Now the chemistry is really coming together and if we can get it as close as perfect, we can be really dangerous.”

Just five minutes later, Bobby Smyrniotis’ men produced an excellent team move to increase their lead, as captain Kyle Bekker tiptoed his way in the box before finding Pacius, who was denied once on the line by Silva, but not a second time.

“Woobens is a guy who enjoys scoring goals,” Smyrniotis said after Pacius’ sixth goal in his last nine appearances. “He is a guy who takes good positions in the box and he is someone who can fully take advantage of the work other guys are doing on the outside part of the penalty area.”

“Everyone was in tune with what they needed to do today,” he said. “There was a lot more attention to detail across the park with all the players. We weren’t searching for something that wasn’t there, but we were connecting things that we could find.”

A mistake from Forge goalkeeper Triston Henry in the 60th allowed Ricci to pounce and pull one back for the visitors.

Ricci did well to close down the Forge ‘keeper, stealing the ball off Henry and placing it in the back of the net to narrow the hosts’ lead, but injured himself in the process during the coming together of two players and was substituted by Sean Rea in the 64th minute.

The hosts outshot Valour 23-6, including 12-4 in shots on goal in a contest that featured a man-of-the-match performance from Valour keeper Matthew Silva, who saved 10 shots.

A Forge triple substitution in the 69th minute also marked Emery Welshman’s much-anticipated re-debut with The Hammers, after re-signing for the club earlier in the week.

“He’s a familiar face but he brings a lot to the squad,” Forge FC captain Kyle Bekker told the reporters on a video call before the game. “He brings something different to that number nine position, he is versatile, he can play wide and he’s got the pace and the ability on the ball.”

“He’s a strong, dynamic forward and he can hold the ball up and I don’t think any defender really wants to play against him because he’s there for a battle,” Bekker said.

The Hammers will host Panama’s Independiente next in the CONCACAF League next Tuesday, while Valour will return to Winnipeg to play second-placed Cavalry FC in the Canadian Premier League on Saturday.