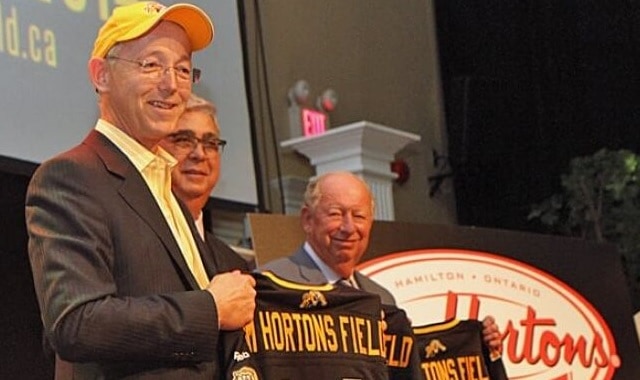 Entreprenuer Bob Young is the main investor, or caretaker, in his term, in the Hamilton Tiger-Cats and Forge FC.

Hamilton Tiger-Cats caretaker Bob Young went on the offensive, which happens infrequently in the CFL these days.

The lead investor in the Ticats, who of course will host the Grey Cup at Tim Hortons Field on Dec. 12, sent a couple of Twitter responses on Tuesday to two sports journalists who had said the league’s product has been lacking during a COVID-compromised regular season. Scoring in the Canadian league is at least a two-decade low at 43.1 points per game. That is also lower than the NFL’s average total of 46.2 so far this fall.

Nevertheless, Young told the critics, “You have it backwards — 2021 is easily the very best season in the long history of the CFL.

“The CFL has not only survived a two year global pandemic, it has come out the other side stronger,” he added.

1/2 @HerbZurkowsky1 and @DannyAustin_9, You have it backwards – 2021 is easily the very best season in the long history of the CFL. https://t.co/Pe1TUKFzSm

2/2 The CFL has not only survived a two year global pandemic, it has come out the other side stronger.

Young was replying to tweets by two football reporters from Postmedia, Danny Austin and Herb Zurkowsky. Austin covers the Calgary Stampeders, and Zurkowsky has covered the Montreal Alouettes since 1997.

I’ll be honest, in my five years covering a CFL team, this has been by far the worst season for the league.
Tough on-field product. A commissioner who disappeared. Brutal attendance.

Look at that playoff bracket, though … this is about to be so crazy fun.

Restarting after a COVID-19 shutdown is a victory in itself for any sports property, and the Tiger-Cats drew praise for how well they welcomed fans back to Tim Hortons Field in September. That might not be the ultimate measure of a best season, especially to fans who have appreciated the CFL for offering more unpredictable gameplay than the high-polished National Football League.

The CFL has long tried to sell itself as an aggro, adventurous alternative to the NFL, which is the largest sports brand in North America. The Canadian game has one fewer down (three instead of four), a wider field (65 yards instead of the NFL’s 53⅓) and allows unlimited motion for pass receivers, who can take a running start toward the line of scrimmage.

Coming out of a year away due to COVID-19, The Ticats and the other eight CFL teams did not have preseason exhibition games to prepare for the shortened 14-game schedule. That likely contributed to scoring decreasing for the third consecutive season, by 6.4 points per game from 2019, which is the largest single-season drop so far this century.

The Ticats, who went 7-7 and host the Montreal Alouettes in an East Division semifinal on Sunday (Nov. 28) at 1 p.m., aligned with that trend line. With quarterbacks Jeremiah Masoli and Dane Evans both contending with injuries, they averaged 22.3 points per game, tied for fourth in the league. In 2019, they averaged a league-most 30.6.

The average CFL game had as many as 53.2 points as recently as 2017. The highest-scoring season in the last two decades was 2008, when the average tilt had 56.2 points.

The previous low was in 2014, when the Ottawa Redblacks began play and the average total was only 45.5.

The winner of the Alouettes-Ticats contest will face the Toronto Argonauts in the East final on Dec. 5 at BMO Field. Toronto went 3-1 against Hamilton this season.