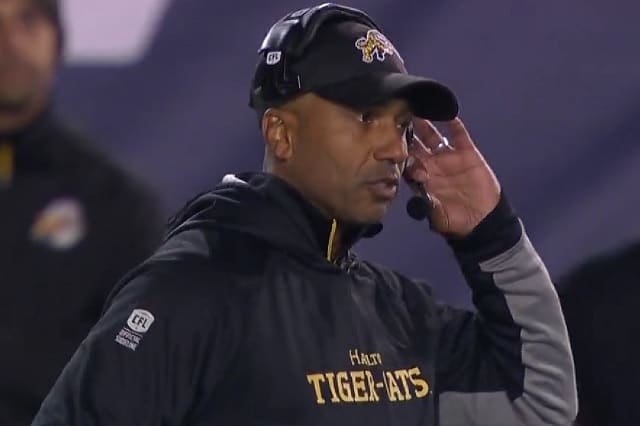 The Hamilton Tiger-Cats and quarterback Dane Evans are running out of road — four points out of a playoff berth and only four games to go.

The endgame played out in all-too-familiar fashion for the Tiger-Cats (4-10) on Friday. They had a late, albeit slim fourth-quarter lead before the Montréal Alouettes (6-7) and veteran QB Trevor Harris authored a winning 70-yard touchdown drive for a 23-16 victory. Evans was 22-of-29 passing for 288 yards with no interceptions and running back Wes Hills burst through some gaping holes opened by his blocking groups, but the nice numbers did not add up to the one that matters — on the scoreboard.

The result puts further distance between the Tiger-Cats and Alouettes in the East Division playoff race, with the Saskatchewan Roughriders (6-8) now in stronger position to be a cross-over team. Hamilton has a bye week before hosting Saskatchewan on Oct. 7.

The win on Friday gives the Alouettes the season-series tiebreaker over Hamilton, along with having a game in hand. Hamilton, which is 0-7 on the road, also has a visit to Calgary in mid-October.

All three of Hamilton-Montréal games were decided by seven or fewer points, with the home team winning each time. While the games were close, Montréal also had a 33-6 edge over Hamilton in fourth-quarter points.

No single play decides a game, but the Tiger-Cats’ fate was sealed Friday when Kiondre Smith’s extra effort after a short pass reception with 57 seconds resulted in the rookie wide receiver losing a fumble. Smith, who minutes earlier almost made a circus catch in the corner of the end zone for what would have been Hamilton’s first fourth-quarter touchdown this season against the Alouettes, was trying to lunge forward while being tackled by Montréal’s Raheem Wilson.

The ball hit the leg of defensive back Wesley Sutton and popped free. Defensive tackle Mustafa Johnson recovered for the Alouettes to effectively end the game.

The Tiger-Cats had 12 penalties for 130 yards, while the Alouettes had four for 35. They also lost the turnover battle 2-0, with the other giveaway coming on a failed gamble on a third-and-two just across midfield in the third quarter.

Harris, who was 26-of-35 for 244 yards with two touchdowns, put the Alouettes ahead to stay with a nine-yard touchdown pass to Eugene Lewis in the deep-right corner of the end zone with 1:42 left in the game. Reggie White tacked on the two-point convert.

Lewis, who had seven receptions for 52 yards and scored both Alouettes TDs, was also the ballcarrier on the scary play that sent Tiger-Cats cornerback Rodney Randle Jr. to a Montréal hospital for observation. Randle, who mans the field-side corner, was taken off the field on a stretcher during the third quarter after being injured while tacking Lewis.

The game was delayed for 14 minutes while Randle received medical treatment. The Beaumont, Texas, native, was alert and able to move his extremities, according to a report from  TSN. Randle started this season with the Alouettes before joining Hamilton.

Hills’ work and a challenge for defensive pass interference (DPI) by head coach Orlondo Steinauer took the Ticats on a fourth-quarter drive that covered nearly the entire field. Officially, it was a 97-yard march, but the Tiger-Cats settled for three points through a nine-yard field goal by Seth Small with 4:04 left.

On that drive, Hamilton ran a play-action pass out of a tight end-heavy formation on second-and-goal at the two-yard line. Smith laid out in the left corner and got his hands on the pass, but could not secure the ball as he hit the ground.

The challenge by Steinauer confirmed that Wilson had held the right arm of wide receiver Tim White on a deep shot by Evans on a second-and-long play. The 44-yard march-off moved Hamilton into the score zone.

White does not get credit for those yards, but he had a game-most 105 receiving yards after catching 6-of-10 targets.

Hills also converted 12 touches into 80 rushing-receiving yards and scored Hamilton’s only touchdown. He had 38 yards on that field-goal drive in the fourth drive.

Ternowski was making his first start since going down in Hamilton’s home win against Montréal on July 28.

Small was 3-of-3 on field goals and added a convert.

Walter Fletcher was Montreal’s biggest gainer, with 62 rushing-receiving yards from his nine touches. David Côté was 3-of-3 on field goals, but missed a convert for the first time this season.

Like the NFL, a one-point kick after a touchdown in the CFL is a 32-yard attempt.