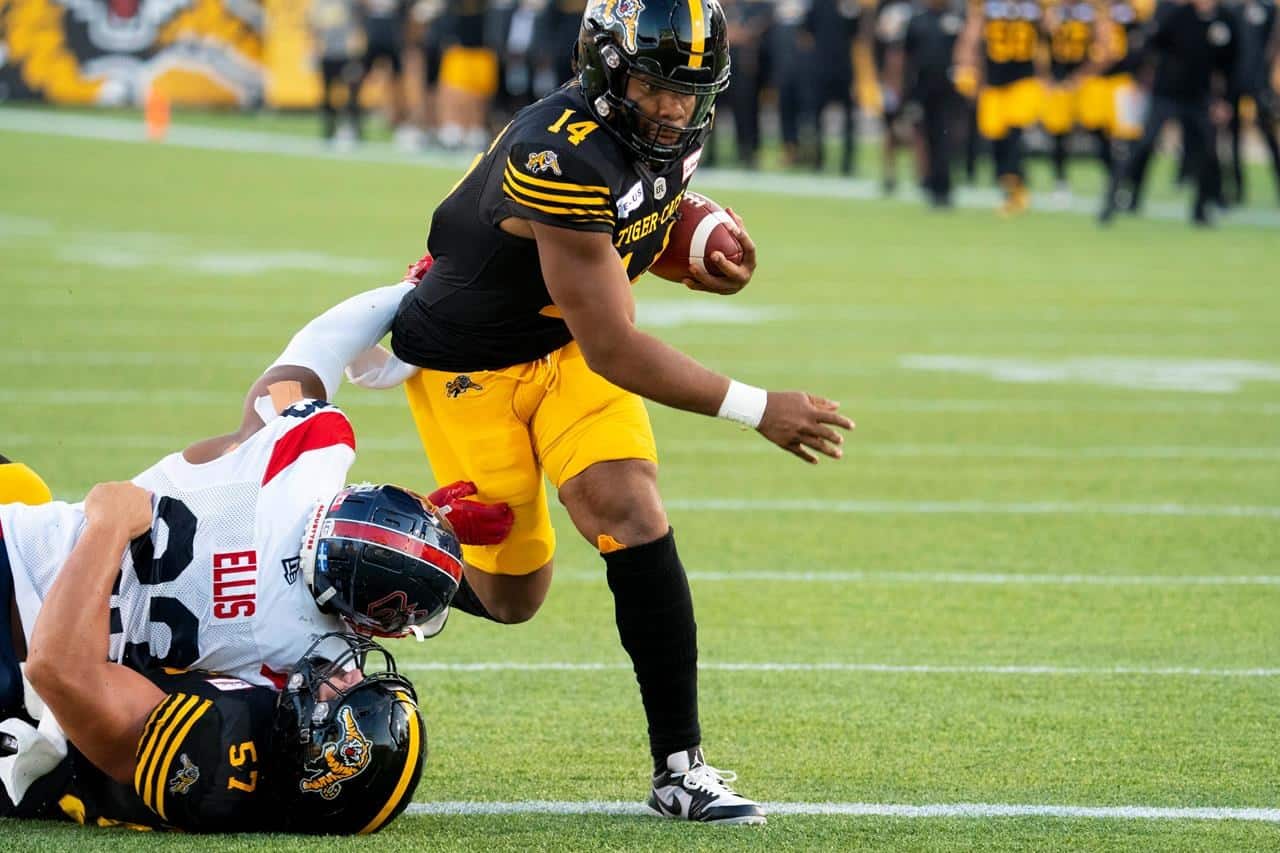 Steven Dunbar Jr. and Don Jackson scored second-half touchdowns as the Hamilton Tiger-Cats held on for a 24-17 win over the Montreal Alouettes on Thursday night.

Hamilton (2-5) opened an important stretch on a winning note. It was the first of six straight (and seven of eight overall) the Ticats will play against East Division competition.

What’s more, Dunbar Jr. and Jackson helped the Ticats outscore Montreal 14-11 in the second half. It marked the first time this season Hamilton had outscored an opponent over the final two quarters, delighting a Tim Hortons Field gathering of 20,932 on a gorgeous summer evening.

Hamilton had been outscored 106-36 in the second half over its previous six games but its fourth-quarter woes continued. Montreal outscored the home team 11-0 in the final frame to make the contest close.

Hamilton has been outscored 77-26 in the fourth this season.

Dane Evans connected with Dunbar Jr. on a 40-yard TD strike at 5:10 of the third to extend Hamilton’s lead to 17-6. Then following an incompletion in the end zone, the Ticats successfully challenged an incompletion citing a questionable pass interference call, giving them possession at the Montreal one-yard line.

Two plays later, Jackson scored from two yards out at 10:06 to put Hamilton ahead 24-6. Ironically, the successful challenge came after two other challenges on seemingly more blatant pass interference plays, were overturned.

Montreal certainly made it interesting in the fourth. After David Cote’s 17-yard field goal at 1:41, Trevor Harris hit Hergy Mayala on a four-yard TD pass at 8:41. Then, Jeshrun Antwi ran in the two-point convert to cut Hamilton’s head to 24-17.

Harris drove Montreal to the Hamilton 27-yard line with just over two minutes remaining but could only run for a six-yard gain on third-and-10. The Alouettes got the ball back at their 38-yard line with under a minute to play and drove to the Ticats’ 21-yard line before Kameron Kelly intercepted Dominique Davis’ pass on the game’s final play.

Davis was in the game as Harris went into concussion protocol after being hit on a running play.

Evans finished 13-of-18 passing for 206 yards and a TD while former Alouette Matt Shiltz completed seven-of-10 attempts for 44 yards while rushing for 42 yards.

Small’s 30-yard field goal at 14:17 of the second gave Hamilton its 10-6 lead at the intermission of a lacklustre opening half. The Ticats amassed 157 total offensive yards, 23 more than Montreal.

Cote opened the scoring with a 16-yard field goal at 14:30 of the first. But it was a lost opportunity for Montreal considering Chandler Worthy’s 39-yard punt return put the Alouettes at the Hamilton 25.

This report by The Canadian Press was first published July 28, 2022.