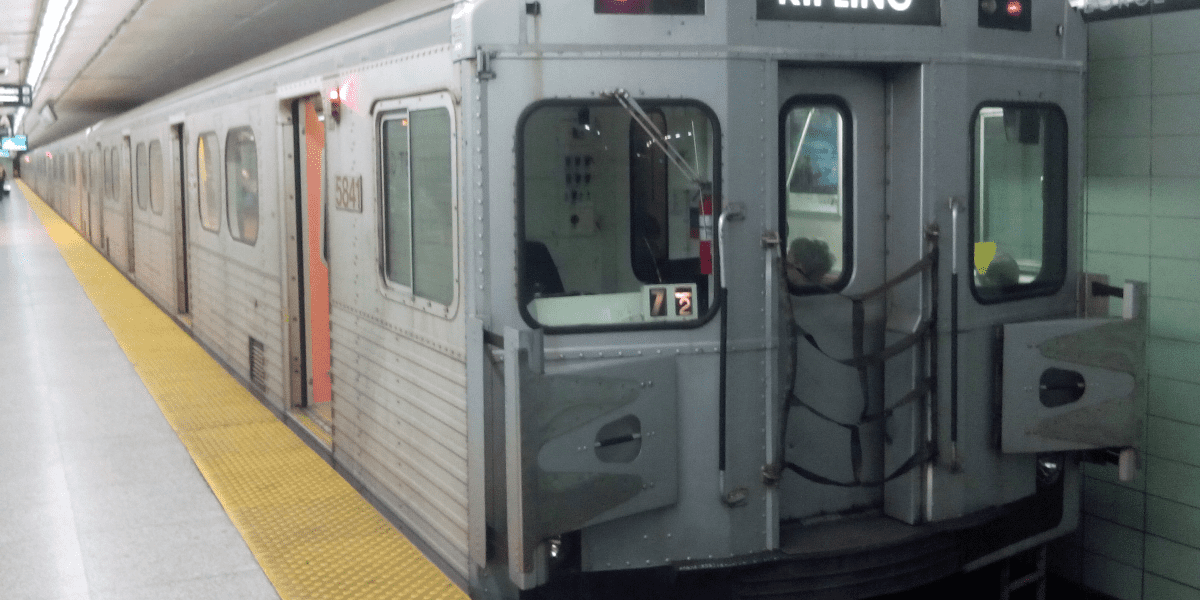 One Redditor used their creativity to spark a spirited discussion on a Hamilton subway line — turning the city into a vehicle-free pedestrian paradise. (ViaAmtrakGuy photo)

Judging by how long it’s taken Hamilton to get its light rail transit (LRT) project up and running, it’s unlikely there’s much of an appetite for a discussion on additional large-scale transit projects — even hypothetical ones.

However, one Redditor threw caution to the wind and used their creativity to spark a spirited discussion on a Hamilton subway line — essentially turning the city into a vehicle-free pedestrian paradise.

u/TylerMurray1216 from Stoney Creek used an elaborate square grid model to map out a subway line that connects Clapison to Confederation Park to Binbrook to the Ancaster Fairgrounds, and everything in between. 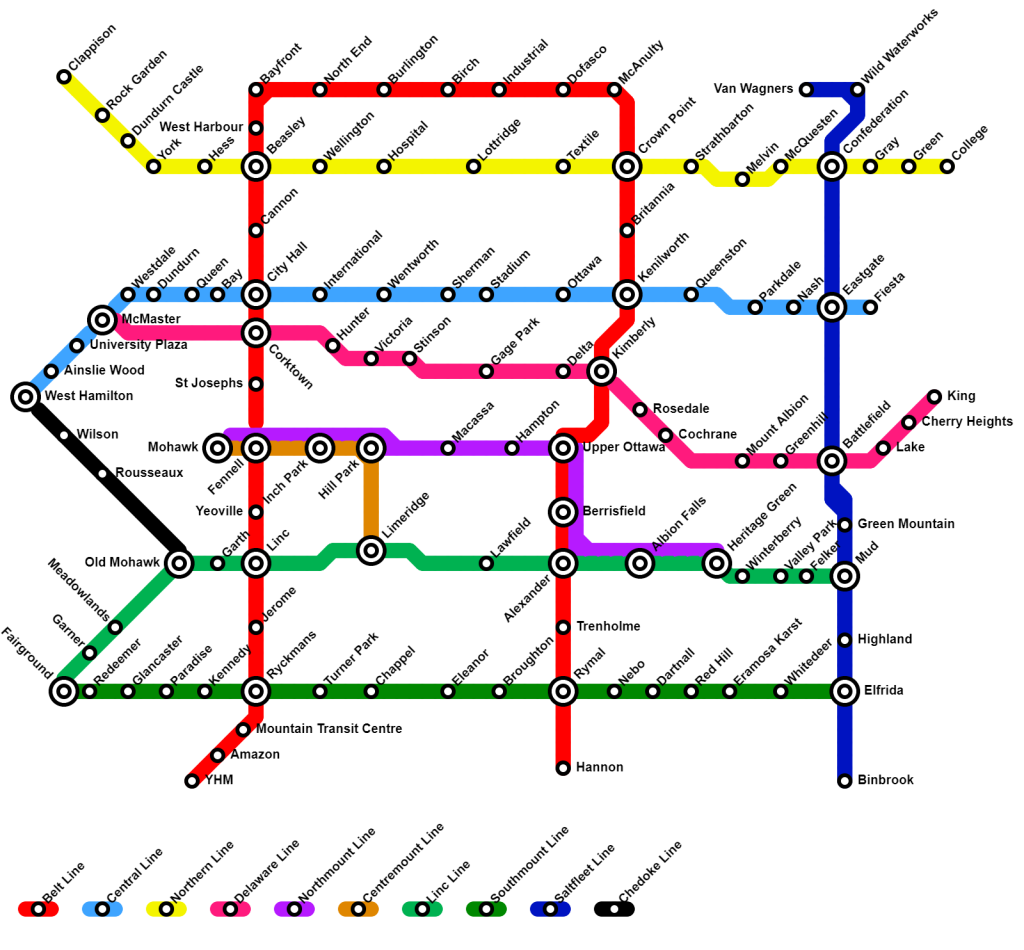 “I was bored so I made a fantasy subway map for our city. Thoughts?” the post title reads.

Feasibility and logistics aside, the post attracted a lot of attention on the Hamilton subreddit.

As much as I love the idea of Hamilton having a subway system, I think this might be a bit much, even for projected growth in 50 years.

Having one central line going east(50 road) to west(Dundas) below the mountain, with connections by bus and streetcars should be enough.

Up the mountain have three going east to west, one between Mohawk and the Linc, one around Rymal, and the other following close to the curvature of the Mountain,

Put in a line going north to south connecting them all that follows under the Queen Street hill, and an other that goes under the Red Hill, and connects from Eastgate, the plaza at Paramount and Mud, and Terminates along with the Rymal line.

I’ve mentioned this on some city related forums, and this map is quite extravagant, but I believe the planned A and B line LRTs should be built as subways. We are spending a ridiculous amount of money on the B line and with the historical, current and future densities along the route we will soon realize it is way underbuilt. Im glad you have taken the time to plan some alignments, especially along existing ROWs. I’ve worked on maps similar to this before, and you got all the major corridors down. Great work!

Good design for sure, a nice grid. Obviously this would be so expensive. The problem is there would be many lines running totally empty. If Hamilton were a thriving metropolis, this would be efficient. The cost to the taxpayer would be insurmountable. Society isn’t ready for mass transit. We’re too reliant on personal transportation. Roads, highways, bridges and it’s infrastructure are designed for cars. Awesome grid with all the stops included, that must have been fun. Looks great on paper 100%

As some Redditors pointed out, the hypothetical subway design isn’t far off from the city’s BLAST network — connecting Greater Hamilton with bus lines that connect to the LRT line. 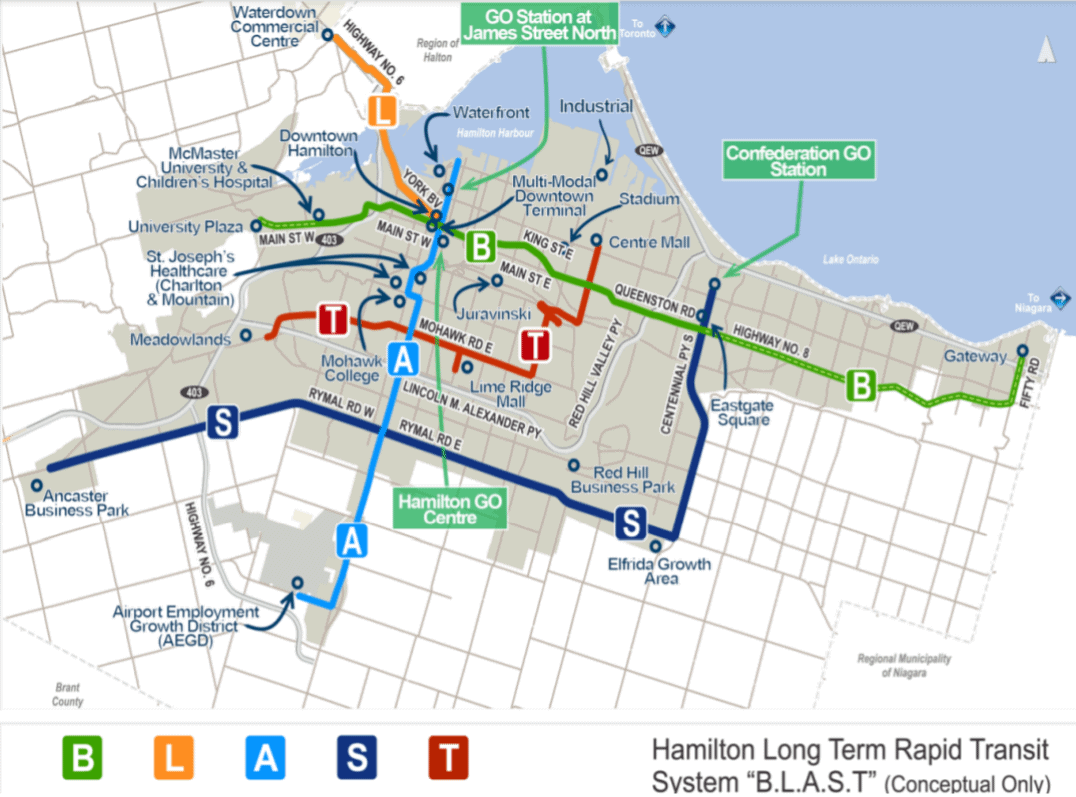 According to the Provincial Growth Plan for the Greater Golden Horseshoe, Hamilton’s population is expected to increase to 780,000 by 2041. While a subway line may not be a likely solution for growth accommodation, finding more efficient ways to move people around the city has already become a reality, and LRT is still just a first step.