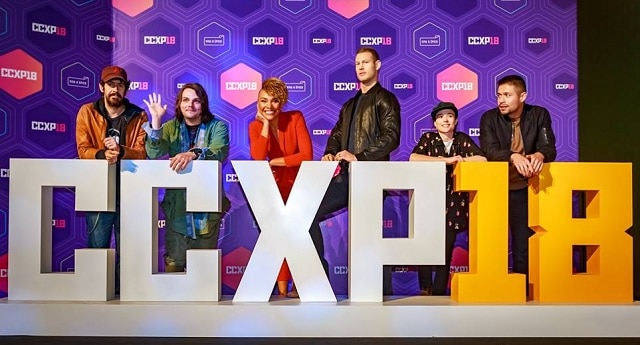 Two acclaimed TV series that film in Hamilton are among the Canadian Emmy contenders that were announced on Tuesday.

Canadians Jesse Kawzenuk, Jeff Campbell, Laurent Spillemaecker and Ryan Freer were nominated for outstanding special visual effects for their work on Netflix’s “The Umbrella Academy.” As well, Christopher Hargadon, Heather Crepp and William Ng were nominated for costume design. The popular superhero series, which stars Elliot Page, earned four nominations, with the other two coming in the categories of cinematography in a single-camera series and sound editing in a comedy and drama series.

The visual effects nomination was for the team’s work on the episode “743,” although they also had the challenge of transforming an area of Hamilton along Ottawa St. into 1960s Dallas for an episode that recreated the assassination of U.S. President John F. Kennedy.

The costume designers were nominated for their work on the episode, “The Frankel Footage.

We're proud of Folks VFX Supervisor Laurent Spillemaecker and his team of brilliant artists that produced some of the most compelling work in this season of 'Umbrella Academy.' @UmbrellaAcad #FolksVFX #VFX https://t.co/zBxME8NDKA

“The Handmaid’s Tale,” the dystopian Hulu/CTV Drama series that has filmed in Hamilton over its four seasons, earned 22 nominations, with Canadians earning nominations in categories for sound mixing, production design, contemporary makeup, single−camera picture editing and casting for a drama series.

Protagonist Elisabeth Moss is once again nominated for outstanding lead actress in a drama, which she previously won in 2017.

In late 2020, the series filmed in Durand Park. Its filming locations have also included a neighbourhood in central Hamilton, the then-Hamilton Spectator building, and the Scottish Rite Club council chamber.

Set up for a new scene of #TheHandmaidsTale at Durand Park in Hamilton, Ontario. pic.twitter.com/lI2kNNduSS

The Emmy Awards will be presented on Sept. 10.