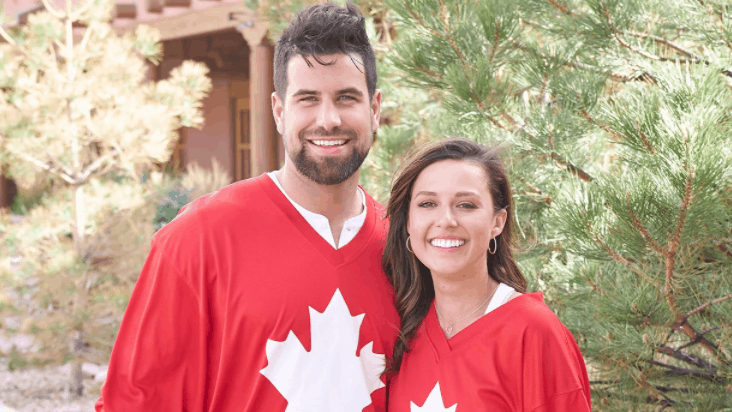 While it’s not blatantly billed as a competition by the network, an elimination-style show where 30 men compete to be the last one standing seems pretty competitive to me. So the winner of the 2021 summer season of ABC’s The Bachelorette is Hamilton, Ontario’s own Blake Moynes.

“I love you and I’m f—ing really excited about life with you,” Blake said… in the most Hamilton way possible.

It was down to the final two and the 30-year-old unemployed wildlife manager was chosen by Katie Thurston on Monday’s (Aug. 10) season finale.

“That chemistry was instant,” Katie told Blake. “But I never knew I’d be falling head over heels in love with you.”

Don’t call it a comeback.

No, actually, call it a comeback.

Blake crashed Season 17 by showing up mid-season but this wasn’t his first Bachelorette rodeo.

He was sent home by Tayshia Adams during season 16 of The Bachelorette. An incident that shook the entire city to its core, according to sources.

After Blake was chosen by Katie on Monday, Hamilton’s finest popped the question.

“…Katie Lane Thurston, will you marry me?” Blake asked.

Katie, the 30-year-old Washington native said yes and then gave him her final rose.

“This was meant to be,” Katie said. “Like, this exact moment we were always meant to experience together.”

The pair will not be living in Hamilton, though. Katie reportedly told producers that the pair can’t afford the housing costs.

However, Katie did hint that she and Blake would be making the trip to Canada in an Instagram post.

Notice the vulgarity. She’s ready for her first Ticats game.