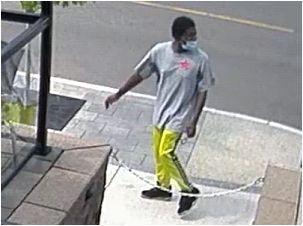 Hamilton Police are seeking the public’s assistance in identifying and locating a man who allegedly chased a group of teens while wielding a knife.

Hamilton Police are seeking the public’s assistance in identifying and locating a man who allegedly chased a group of teens while wielding a knife.

On Tuesday (August 18) shortly after 1:00 p.m., Hamilton Police were called to the area of Locke Street and Melbourne Street to reports of a man chasing several teens.

Once on scene, police spoke with the group. They told police they were walking northbound on Locke Street when they noticed a man walking towards them and who appeared to be focusing on one of the girls in their group.

Another girl ale in the group verbally confronted the suspicious man. Police say the suspect then ran towards them with what was believed to be a knife in his hand.

The teens separated and the suspect briefly chased the girl who had confronted him. He was unable to catch up to her and was last seen running westbound on Melbourne Street.

Officers conducted a thorough search of the immediate area but were unable to locate the suspect.

Hamilton Police are seeking the public’s assistance in identifying and locating the man.

With the information available, police believe the man was in possession of a knife at the time of the incident. If seen, police are instructing the public not to approach him but to contact 911 immediately.

No one was physically injured in the incident.

Police have provided the following description of the suspect:

Police ask anyone with information related to this case to contact Detective Constable Sami Haddad by calling 905-546-3816 or Detective Sergeant Dave Oleniuk at (905)546-3833.