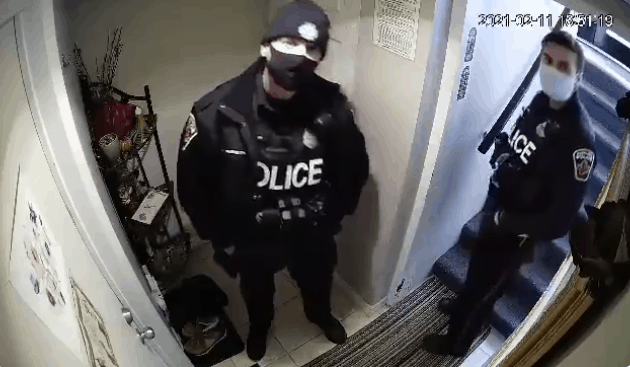 The Hamilton Police Service has issued a statement following the release on social media of a video showing a tense interaction between a woman and one of the service’s officers earlier this month.

The video, which has been making the rounds on social media in the last 24 hours, shows two Hamilton police officers responding to what seems to be a dispute with a landlord.

The woman police are attempting to issue a warning to speaks to the officer from behind a latched door.

The exchange continues with the woman pressing on with her story but the officer again talks over her and calls her “unreasonable.”

This is #HamOnt. This is why we say @DefundHPS. Notice how she never raises her voice, yet he accuses her of being "unreasonable" and not listening, while repeatedly talking over her and threatening her with arrest for property damage that never happened. Then he lunges at her pic.twitter.com/rm3qtPlenm

While talking over the woman, the officer warned her that she could be arrested if she damages any of the property belonging to her landlord.

As the officers start walking away from the woman’s door, she opens the door and tells them to “enjoy your bullying of a position,” at which time the same officer who was talking to her lunges at her now closed door.

In the statement issued Friday morning (Feb. 12), HPS said they’d been made aware of the video and had passed it on to its professional standards branch for investigation.

“Public trust and accountability are integral to our work and we are committed to upholding these values,” the statement said.