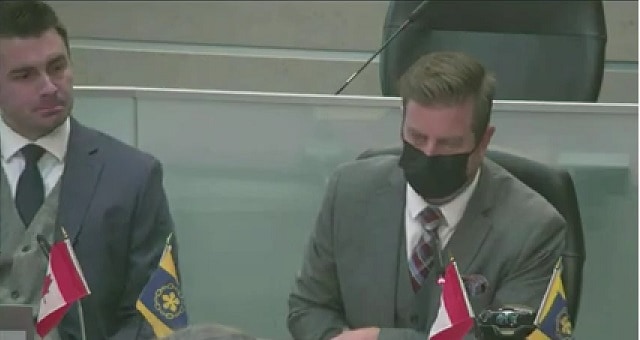 The elected leadership of Hamilton are asking the city’s two PC Party of Ontario MPPs to drop by for  a chat about Premier Doug Ford’s Bill 23, the housing legislation that municipal politicians and planners have widely panned.

Hamilton Mayor Andrea Horwath, city councillors — many of whom have appeared at anti-sprawl Save The Greenbelt rallies — and staff members have been highly critical of Ford’s More Homes Built Faster Act. Tourism, Culture and Sport Minister Neil Lumsden (Hamilton East—Stoney Creek) and MPP Donna Skelly (Flamborough—Glanbrook) voted for the bill when it passed on Nov. 28.

On Wednesday, city council voted 14-1 in favour of a motion by Ward 8 Coun. John-Paul Danko that calls on Lumsden and Skelly to appear before a future GIC (general issues committee) meeting to discuss the bill.

“We invite our Conservative party of Ontario MPPs — Donna Skelly, Neil Lumsden — to appear before this council to answer for the reckless, irreversible harm that their government, of which they are a part, are doing to the City of Hamilton and the taxpayers that we represent,” Danko said in introducing the motion.

“There is a precedent for this,” Danko added. “MPP Skelly has appeared before this council, as a delegate, and I would suggest that we extend that invitation to them so they can answer for the actions of the government and the impacts of Bill 23, and associated issues.”

Mayor Horwath, who was the Ontario Opposition leader while helming the New Democrats in Ford’s first term, has not been voting on all motions during the early days of the new council term. But she told inthehammer this week that the bill is “inappropriate.”

Ward 2 Coun. Cameron Kroetsch cast the only vote against requesting the presence of the local MPPs. The downtown councillor said the motion was a tad “theatrical” but agreed the city has an “unprecedented situation” in trying to oppose Bill 23, which Municipal Affairs and Housing Minister Steve Clark announced on the day after municipal elections. The bill, which amends 10 provincial acts, was passed all of 34 days later.

Messages that inthehammer sent to both Lumsden and Skelly on Wednesday afternoon received an automatic reply.

Numerous cities have criticized the province for Bill 23, which cuts and freezes some developer fees to municipalities. Councillors in Hamilton were told Wednesday by corporate services general manager Mike Zegarac that the loss of those fees leaves the cost of city services “to be absorbed by ratepayers and taxpayers.” The stated aim of the bill is to solve an affordable housing crisis, but municipalities have generally said sufficient housing has already been approved and there is plenty of space without having to expose the Greenbelt.

The financial effects of Bill 23 were the context of council discussion and Danko’s motion on Wedneday. The main motion, moved by Ward 5 Coun. Matt Francis — whose ward is in Lumsden’s riding — looks at the effects Bill 23 could have on Hamilton’s finances and its taxpayers. It passed by an unanimous 15-0 vote.

The minister on the housing file, Clark, has said he will launch a third-party audit of the finances of select municipalities to determine if Bill 23 will indeed cause a shortfall. If it does, the province says it will make those communities “whole.”

Coun. Clark: ‘Cities and taxpayers are seeing The Grinch’

Prior to the votes, Ward 9 Coun. Brad Clark asked Zegarac a series of questions to confirm that Bill 23, as written, contains no language that will lead to lower housing costs. He also noted that developers in Hamilton have agreed with the city about the development charges it levies.

“It is confusing to staff as to how these reductions will float to purchasers and that continues to be an outstanding ccommunication as it pertains to Bill 23,” Zegarac said.

Clark replied, “The whole argument that this is going to lower costs is specious. They did not put that in the legislation. So the developers are getting a Christmas present while cities and taxpayers are seeing The Grinch.”

The discussion came a couple hours after Premier Ford said Mississauga Mayor Bonnie Crombie and other municipal leaders who oppose Bill 23 need to “get on board” and “stop whining” about it. The comments were made without prompting while Ford was making a transit funding announcement in Brampton.

The latest anti-Bill 23 demonstration in Hamilton, a Save Farmland Mega Rally in front off city hall on Sunday, drew more than 1,000 people. The downtown’s member of Parliament, New Democrat Matthew Green appeared, as did Burlington Mayor Marianne Meed Ward and eight Hamilton councillors.

The motion passed on Wednesday looks at only the financial fallout Hamilton faces.

“These impacts of Bill 23 are going to have potential to severely harm our taxpayers and I’m looking for all kinds of ways to minimize those impacts to taxpayers,” Francis said as he read his motion.

Kroetsch, Ward 3 Coun. Nrinder Nann, Ward 12 Coun. Craig Cassar and Ward 15 Coun. Ted McMeekin each noted that addressing the financial component was an initial step to resisting Ford’s changes to housing policy. But they all noted there is much more at stake for Hamilton residents than a lead-pipe lock property-tax increase.

Bill 23 weakens renter protections, and a city’s ability to create them, as well as reducing the input of local conservation authorities.

“This is an unprecedented situation,” Kroetsch said. “I’m hoping to bring a motion forward in the new year where we can talk about some concrete steps that are also unprecedented.

“The province is saying they are going to take away all the things you (Coun. Francis) talk about in your motion, to degrade and destroy our natural infrastructure. Then I think we have to take an absolutely unprecedented approach to stop this action.”

Nann added, “I would want guarantees from the province that any municipality isn’t restricted in our ability to protect tenants, specifically those in affordable housing and purpose-built housing.” But she noted that with time of the essence, a step-by-step approach to addressing the environmental and social impacts of the bill will have to come in due time.

The non-profit Environmental Defence has told inthehammer that the bill would put carbon-reduction targets for 2030 and 2050 out of reach if it is passed.

Hamilton is also in one of the most extreme heat-vulnerable regions of Canada. Cassar, who cofounded a Save Our Streams Hamilton wetlands protection group with Ward 13 Coun. Alex Wilson, affirmed that Bill 23 is about more than rising taxes.

“I get that the financial impact is real — that’s understood by everybody,” Cassar said. “But it’s much bigger than that. This is about taking away local decision-making power. Before this came down we were on a path to bilding a better Hamilton, with walkable communities and the positive health effects. If we have to build sprawl then our resources to do that are limited.”

McMeekin, a former Ontario Liberal housing minister and agriculture minister, also said the province’s promise cities could be “made whole” implies compliance with the province’s moves.

“We need to say to the province, ‘this is part one and we’re coming for part two, part three, part seven thousand,’ ” he said, drawing chuckles from around the chamber that seemed to confer support.