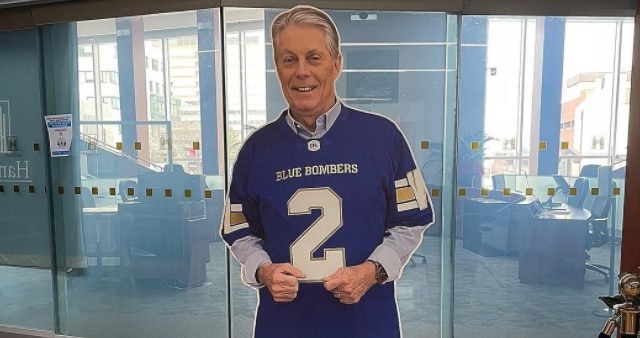 It will be a Blue Christmas in the lobby of Hamilton City Hall for Mayor Fred Eisenberger.

Thursday, the mayor honoured the bet that he made on the Grey Cup with his Winnipeg counterpart, Mayor Brian Bowman. The friendly wager called for the ‘losing’ mayor to wear the opposing team’s jersey and have a lifesize cardboard cutout made of him wearing it. The cutout of Eisenberger in a Winnipeg Blue Bombers’ jersey with the jersey number 2 is on display. It will remain in place for 108 hours, one for every Grey Cup game.

“Boooo to BLUE! Hoping to never have to wear another team’s jersey,” Eisenberger wrote on Twitter.

Closing out the year & the #GreyCup Mayoral bet with @Mayor_Bowman … boooo to BLUE! Hoping to never have to wear another teams jersey #HamiltonProud #TigerTown
1/2 pic.twitter.com/hfLQRSr3Vs

The Blue Bombers defeated the host Tiger-Cats 33-25 in overtime in the Grey Cup at a sold-out Tim Hortons Field on Dec. 12, winning their second consecutive Grey Cup with a year off for COVID-19 in between. The Tiger-Cats, who were a 3½- to 4-point underdog, took a double-digit lead into the fourth quarter. But Winnipeg, with a strong wind at its back, roared back with 15 consecutive points.

Hamilton quarterback Jeremiah Masoli drove the Tiger-Cats to within five yards of a Grey Cup-winning touchdown in the final half-minute of regulation time. But Winnipeg’s defence smothered a rush attempt by Don Jackson, and then Winnipeg defensive back Deatrick Nichols disrupted a Masoli pass that Jaedon Acklin could not haul in. The Tiger-Cats settled for a short field goal that forced overtime, where Winnipeg scored a touchdown and two-point convert, then intercepted a pass to end the game.

Hamilton also lost to Winnipeg in the 2019 Grey Cup. In 2014, Eisenberger also had to wear a Calgary Stampeders jersey after the Tiger-Cats lost a heartbreaker in the Canadian Football League championship game. Ever the good sport, Eisenberger wore Stampeders red for an entire three-hour council meeting.

City council is meeting virtually due to COVID-19, so look for Eisenberger to perhaps sport some Bomber blue in the new year.