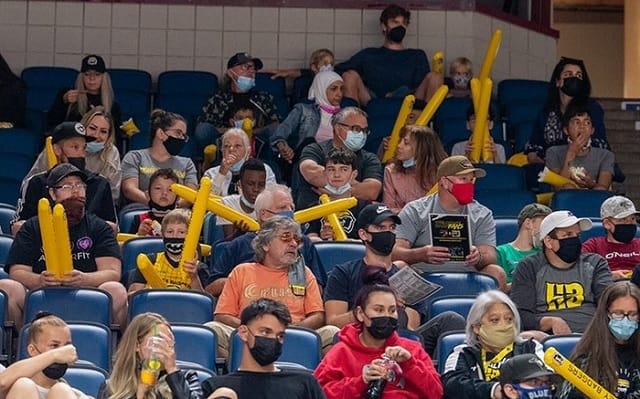 A star effort from Lindell Wigginton and — perhaps fittingly — a shot in the arm from a local talent helped the Hamilton Honey Badgers win their first game in front of home fans in more than 700 days.

In front of a ThunderStix-banging, mask-wearing crowd inside FirstOntario Centre, the Honey Badgers rolled to an 87-75 win against the Ottawa BlackJacks on Wednesday night (July 21). Wigginton, who has NBA G League experience, had a characteristic effort with 32 points and nine rebounds to help Hamilton pulled away in a game that was tied at halftime. Hamilton native and returning Canadian Elite Basketball League all-star Jean-Victor Mukama was an all-around force with 16 points and also nabbing nine rebounds.

Hamilton (7-3) ended a two-game losing streak and set up a second-place battle with the Fraser Valley Bandits (5-2) on their home court on Friday.

Ottawa (3-6), which got 22 points from Tyrell Green, was coming off an impressive win last Saturday against the defending CEBL champion Edmonton Stingers.

“Last two games, I felt I wasn’t getting in rhythm early,” Wigginton said in on-court interview on CEBL Twitch channel. “I just had to stick with it, and we just had to keep working and play for each other after our last two games.”

Players stayed on the court after the final buzzer to salute the fans. The third-year CEBL, a summertime league with a focus on Canadian players who play overseas, has been permitted to allow up to 1,000 fans per game into its Ontario venues under Step 3 of the province’s reopening plan.

Mukama provided the dagger with 4:55 left, sinking a corner three while falling away. That triple helped Hamilton take a 78-73 cushion lead into the the Elam ending portion.

Under CEBL rules, the scoreclock is turned off following the first stoppage in play with fewer than four minutes left in the fourth quarter. The teams play to reach a target score that is nine points more than the tally of the team which is ahead at the time (or both teams if they are tied).

Wigginton made a tough layup to start a 7-0 run that put Hamilton ahead to stay early in the fourth quarter. He also scored seven of Hamilton’s nine points during the Elam ending.