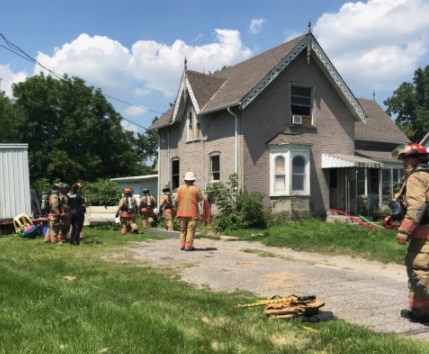 Hamilton firefighters are on the scene of a house fire in Mount Hope Thursday afternoon (Aug. 5).

According to Hamilton Fire Department, shortly before 1 p.m. crews were called to a home in the area of Homestead Drive and Airport Road W to reports of a structure fire.

Shortly after 1:30 p.m. HFD Tweeted that most of the fire had been knocked down by crews but that they would remain on scene to check “for extension throughout the dwelling.”

No tenants were on site when fire crews responded and HFD expects to maintain a presence in the area for some time to come for clean up.

Crews are working at a structure fire in Mount Hope. Initial fire has been knocked down and crews are still checking for extension throughout the dwelling. No tenants were present on our arrival. Crews will be on scene for some time. pic.twitter.com/14fb0CsnAw