Next week, Hamilton’s elected leadership will learn what a long-discussed proposed vacant home tax would look like in the city — and what it would cost to administer it.

Vacant properties, or ones held by as investments, have long been considered a sizable part, if far from the only one, in Hamilton’s affordable housing crisis. Last year, Oxford Economics ranked Hamilton as North America’s third-least affordable city. On Wednesday (Feb. 2), a general issues committee (GIC) meeting will hear a staff presentation on creating a vacant home tax. Other major Canadian cities, namely Toronto, Ottawa and Vancouver, have created a 1 per cent tax in an effort to increase the amount of rental properties available.

Hamilton city council voted to explore a adding a tax last summer. A an Engage Hamilton public survey in September found there is public support for the measure.

Out of 3,860 responses to the survey, there was 91.4 per cent support for ” the idea of a vacant home tax.” And 71.5 per cent of respondents believed the number of vacant homes in Hamilton was hurting the supply of affordable housing.

Part of the affordable housing shortage is also due to a lack of construction during the 2016 to ’20 period, according to a report last year from the Smart Prosperity Institute. In some ways, Hamilton is still playing catch-up.

The COVID-19 pandemic has further exacerbated the situation. During the pandemic, though, Hamilton’s city housing division has managed to find dwellings for an estimated 600 homeless individuals and families. This week, the city also received $23.3 million from the federal government as part of a nationwide rapid housing initiative.

The staff report says it would cost $2.6 million this year to set up a program to assess and collect a vacant home tax, which would be financed through an internal loan. But in 2023, which would be first year of such an assessment, the city would collected about $4.3 million from a tax on 1,135 eligible vacant homes, for a net return of $2.123 million. Estimated expenses and estimated revenues would decline commensurately in the years to come: 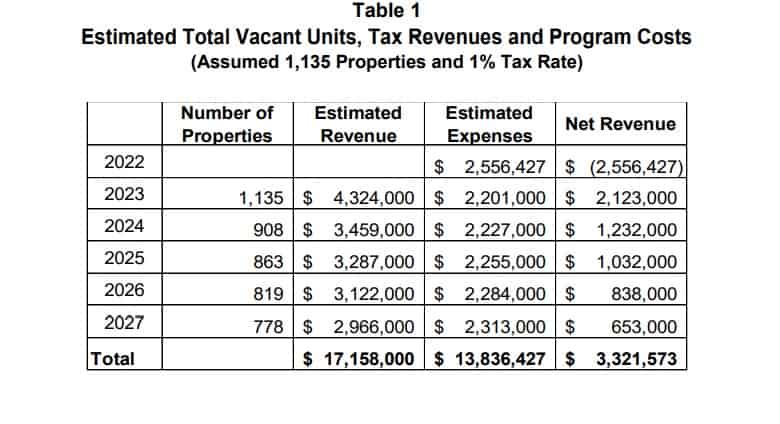 Council first approved a motion “directing staff to review the feasibility of imposing a tax, fee or charge to the owners of vacant properties” back in December 2019.

Along with the public survey, the West End Home Builders’ Association (WE HBA) was also consulted about the potential tax. The home builders’ association said it “not opposed to the development” of a VHT, but it said the measure needs to very precise.

“WE HBA is not opposed to the development of a Vacant Home Tax, though we do believe the implementation of the tax must not interfere with the construction of new housing supply,” says a letter signed by Michelle Diplock, WEHBA’s manager of planning and government relations. “Any action with respect to a new tax must be undertaken with extreme precision and caution to avoid unintended consequences. Furthermore, any proposed tax should be designed in such a way as to target only unproductive use of properties that are being used to capture appreciation and equity. WE HBA does not believe that the number of vacant homes in Hamilton is significantly impacting the supply of affordable housing in Hamilton. We maintain that the growth in the supply of new housing units is the best method to address the housing crisis, as new supply continues to lag behind our population growthin the GTHA (Greater Toronto and Hamilton Area).”

The homebuilders also expressed concern about potential duplication with a proposed federal “underused home tax” that the federal Liberals, and Prime Minister Justin Trudeau, ran on in the 2021 election. The Liberal platform contained a section about “curb(ing) unproductive foreign ownership” of residences. However, the engagement process for that just eneded on Dec. 2.

The working definition of vacant home in Hamilton would be one that was unoccupied for more than six months during the preceding
calendar year. Several examptions are proposed, including renovations, or vacancy caused due to the death of the owner(s).