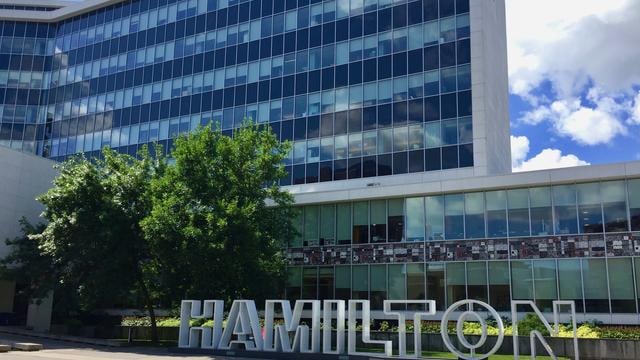 Hamilton City Council is once again pondering the possibility of the development of a large ‘Tech Hub’ on the land located directly behind City Hall.

The proposal, put forward by Metro Partners Inc. and developed in partnership with Lintack Architects, includes one 24-storey tower, one 20-storey tower with an expansive underground parking lot that can accommodate up to 1,500 cars.

The plan also allows for an additional 12-storey building that would be reserved for municipal offices.

Local entrepreneur, Paven Bratch, met with Hamilton’s General Issues Committee on Monday (Aug. 9) to discuss the ambitious project and what it could mean for the city.

“Hamilton is a metropolitan city and it needs to be viewed that way,” Bratch told committee members.

“This would be a completely transformative development in the city…it would level the playing field with cities like Waterloo.”

As it stands, Hamilton does not currently have any dedicated Class A buildings that are centrally located and could support the needs of startups and bigger, more established technology firms.

Bratch said that given the city’s abundance of tech talent, and the number of people in the sector who are being educated and trained in Hamilton, a downtown Tech Hub is essential to build on that momentum.

“A tech hub would provide the fourth leg of Hamilton’s Renaissance,” Bratch said, citing the upcoming redevelopment of the city’s entertainment facilities and the return of the LRT, and the start of all-day GO service as signs of Hamilton’s potential appeal for “employers of the future.”

At Monday’s meeting, Bratch estimated that a development of this nature could bring approximately 6,000 jobs in the tech sector to Hamilton.

This is the second time Bratch has met with council members to discuss this project. The first time was back in February 2020. At the time, City staff were expected to report back on the project’s feasibility the following September.

The pandemic, however, altered those plans and the staff report was back in front of GIC at Monday’s meeting.

Ultimately, the staff report found that the Tech Hub is conceptually feasible but there is still much more research on the development end of the project that needed to be carried out.

“From an economic development perspective, Hamilton is well-positioned to take advantage of this concept,” the report said.

“From a development feasibility perspective, however, staff have concluded that additional studies and analysis would be required to make a firm determination.”

Initially, the Tech Hub concept was submitted to City staff and council in 2016 when at that time staff were directed to seek out a real estate market consultation on the land behind City Hall to feel out what the possibilities would be if the land was put up for sale.

At the time, the staff reviewed concepts put forward by five different parties but everything was put on hold because the City then underwent an accommodation review.

Following a lengthy debate and several amendments, committee members voted 7-5 to approve spending up to $100,000 to prepare for a bid process for the land behind City Hall. Councillors will decide further steps in early 2022.