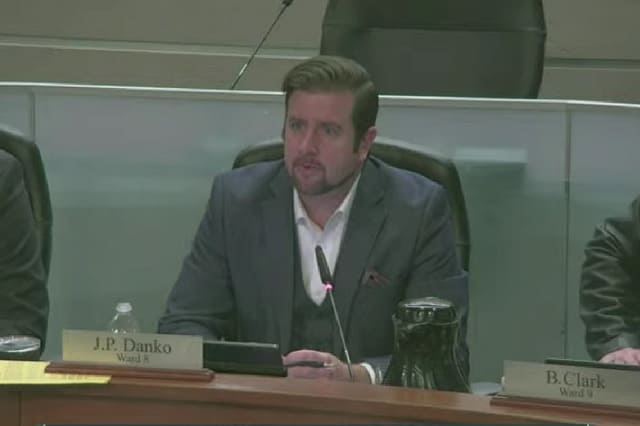 A city councillor in Hamilton signalled tonight that he wants his colleagues to tell the province — collectively — how they really feel about the nixing of the local urban boundary, which has also led to a major environmental law charity suing the Ontario government.

On Wednesday night, Ward 8 Coun. John-Paul Danko gave a verbal notice of motion to a general issues committee (GIC) meeting that he will push for local elected leadership to “officially have a comment” on the province’s changes to Hamilton’s official plan, which were announced two months ago. Danko said he plans to bring the motion to a meeting in four weeks’ time. The next GIC meeting that does not pertain to the municipal budget is on Feb. 15.

Environmentalists and many city-level politicians and managers, including those in Hamilton, have decried two major development changes introduced last fall by the Premier Doug Ford-led Ontario PC Party government. One is the sweeping Bill 23, The More Homes Built Fact Act. The other is the plans to develop the Greenbelt, which the Ontario integrity commissioner and auditor general are now investigating after a joint call from the other three party leaders.

A good portion of erstwhile Greenbelt land is in rural Hamilton. But the city is dealing with an unique third prong. On Nov. 4, it learned most of the official plan that protected hundreds of acres of “whitebelt” farmland that was not in the Greenbelt had been rejected by the province. Instead, the province ordered a 2,200-hectare expansion of the urban boundary.

“I want us to officially have a comment on those official plans the province has imposed on us, understanding that we cannot (legally) challenge them,” Danko told fellow councillors on Wednesday night.

“It’s important for council to say whether we support these plans that are being imposed on us,” said Danko, who recently noted that the province has a policy statement which says agricultural land must be preserved unless there is no alternative.

In a tweet on Jan. 9, he accused Municipal Affairs and Housing Minister Steve Clark of “seem(ing) to have ignored his government’s own policy.”

The provincial policy statement requires agricultural land to be preserved unless there's no alternative.@cityofhamilton provided an alternative to protect @OntarioFarms & provide needed new housing.@SteveClarkPC seems to have ignored his government's own policy. #onpoli https://t.co/0xVX3NAeVu

The choice in Hmailton to freeze the urban boundary in November 2021 came after a several-months-long debate. Hundreds of Hamilton residents, many of whom have also joined protests against Bill 23 and the Greenbelt land swap, spoke against opening farmland to development.

Many pointed to the fact that Hamilton is one of the most vulnerable cities in Canada to climate change, and that having locally grown food will become more paramount in years to come. Others pointed to studies that show it costs a city much more to service suburbs than it does to build up urban areas through what is called infill density.

Ultimately, the former council voted 13-3 to leave the urban boundary as-is. Then-mayor Fred Eisenberger said at that time that doing so provided a guideline for “how Hamilton should grow.”

None of the three councillors who voted in favour of urban boundary expansion, and whitebelt development, are still in office. One of them, former Ward 12 councillor Lloyd Ferguson, was influential in having some farmlands southwest of Ancaster added to the Greenbelt in 2017. At that time, Ward 15 Coun. Ted McMeekin was the municipal affairs and housing minister under then-premier Kathleen Wynne.

Clark said in the Ontario legislature on March 31, 2022 that both Hamilton and Ottawa were trying to “prioritize anti-growth, and anti-housing ideology.” But throughout 2022, the former city council passed a number of measures intended to foster gentle density and increase housing stock.

The changes to the official plan were made by the Environmental Registry of Ontario.

Ecojustice is the environmental law charity that is suing the province. It said Hamilton had an “official plan (that) was prepared by the city’s planning staff and approved by its council after extensive consultation to ensure that residents had easy access to local services like transit, schools, community centers and parks. The plan would not only have benefited city residents and local farmers, but it was an essential strategy in protecting the local environment and fighting climate change.”

The integrity commissioner, essentially, will be looking at whether inside information was passed to developers who bought land while Ford was on the record as saying it would not be touched.

A spokesperson for Clark sent a statement to Toronto-area media outlets on Wednesday stating, “The Minister looks forward to being cleared of any wrongdoing at the conclusion of the investigation.”

Meantime, all councillors present on Wednesday voted 15-0 in a favour of a motion by Danko that aims to have stormwater fees come to the city by January 2025, which is two years away. The motion gives city staff until mid-year to figure out the steps and resources needed to charge a dedicated user fee for stormwater services.

Danko said the focus of the fee system would be to ensure that “these commercial, industrial, institutional properties that have impervious surfaces, that those classifications of properties pay their share.” Such user fees are considered an alternative to raising water rates for household users.

Historically, stormwater charges have been a non-starter in Hamilton. In the last three-plus years, the city has had the Sewergate scandal, an “equipment failure”-related discharge into Hamilton Harbour after heavy rains in October 2021, and the recent Burlington St. and Rutherford Ave. sewage spills.

“Every city with a stormwater system that is around 150 years old, like Hamilton’s, has encountered the exact same problems as Hamilton,” Danko said while introducing his motion. “We are at the point where we need to find funding solutions with the situation we have in Hamilton.

Coun. Brad Clark sits on the board of two conservation authorities. Clark said he once opposed stormwater fees, but has changed his mind. He also said it was essential if the province goes ahead with its development plans.

“If they allow developers to develop on a wetland, whether it’s building a warehouse or a subdivision, that wetland, that sponge, filled with biodiversity, just disappears. I can tell you, it will take decades for engineered wetlands like the ones we have added recently to catch up to what a natural wetlands provides.

“We cannot protect citizens of Hamiton from flooding without the resources,” Clark added. “Right now now the only way we have is through water rates, and that seems unfair to put that on the citizens of Hamilton.”

Clark noted that the plan does provide compensation to a developer who accounts for stormwater flow.

“I’m hoping beyond hope this will give us the revenue we need to repair our pipes,” he said.

— with files from Anthony Urciuoli and The Canadian Press