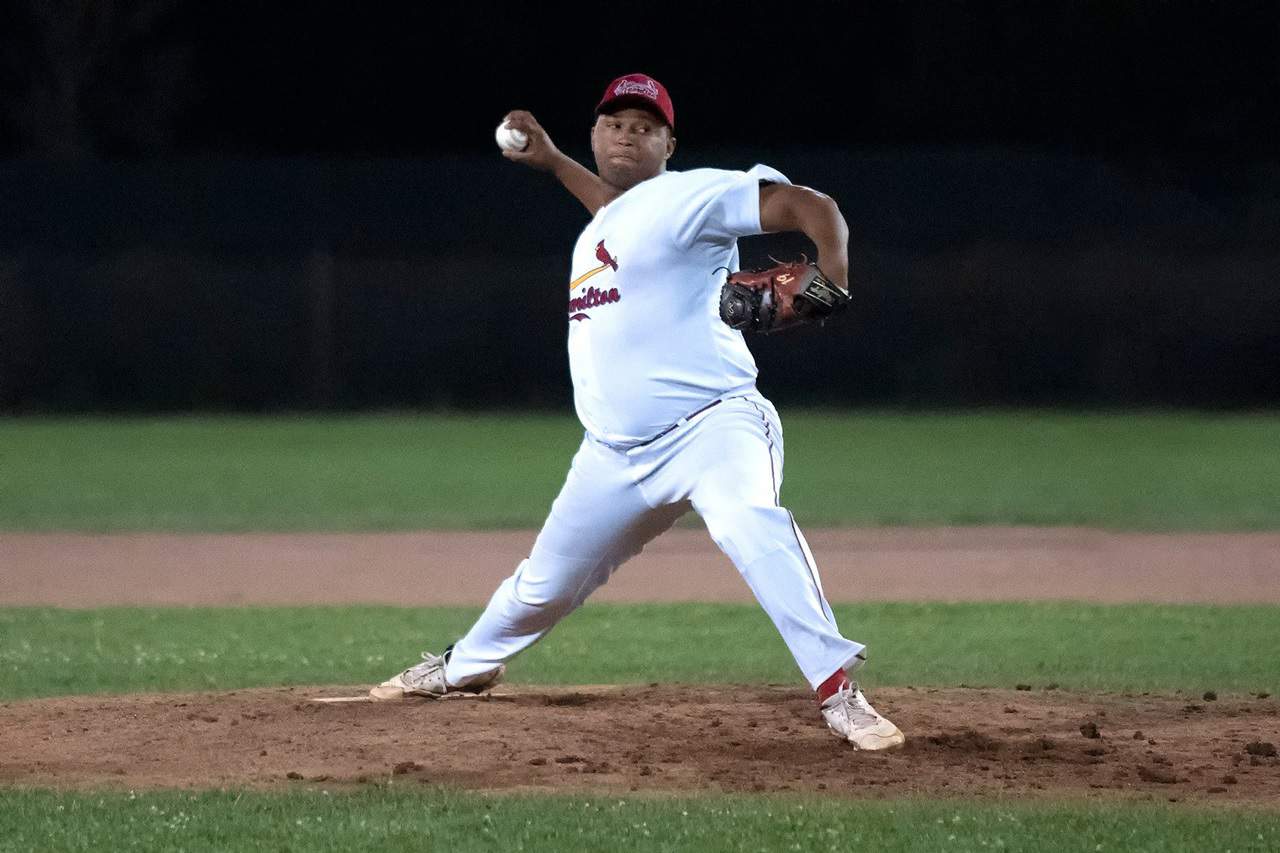 The third time through the opposing order was when midnight tolled for Corben Peters, Luis Jean and all of the Cinderella Hamilton Cardinals.

The Hamilton ballclub hung with the London Majors into the middle innings of a must-win Game 4 in the Intercounty Baseball League semifinal in front of an engaged crowd at Bernie Arbour Stadium on Friday night. The Majors, gifted with at least one extra out from infield miscues that the Cardinals had buffed out of their game during the postseason, cracked open a close contest open by putting crooked numbers on the scoreboard, with a four-run sixth and three-run eighth. By the time that London shortstop Keith Kandel celebrated his two-run home run against reliever Daury Torrez with a José Bautista-style bat flip, Hamilton was on the way to a 10-4 defeat and a 3-1 series loss.

Still, the Cardinals stuck around longer than close observers of the IBL might have anticipated in July when they had 14 losses in a row. Over the last six weeks, even as frontline players returned to college and university, they played above .500 baseball and made the IBL semifinals for the third time in four seasons. Their season-extending 3-2 victory in Game 3 on Wednesday was the franchise’s first win in an IBL semifinal-round game since 2002.

London will face the Toronto Maple Leafs in the best-of-seven final for the Jack and Lynne Dominico Cup. Toronto beat the Welland Jackfish 3-1 in the other semifinal.

Peters, a rookie righthander who travelled from his home in Ottawa — where the 23-year-old started a new job this week — to make the start, was charged with the defeat after allowing four earned runs across 5 1/3 innings. For a spell, he vexed a Majors lineup that averaged 9.31 runs per game in the regular season. Peters notched seven strikeouts overall and retired 12-of-13 batters after giving up a long two-run home run to London slugger Cleveland Brownlee in the first inning.

London righthander José Arias turned in a winning seven innings for the second time in the series. Arias allowed just two earned runs on seven hits, with 11 strikeouts and zero bases on balls. Hamilton got some spark from its depth hitters, including a 3-for-3 night by designated hitter Robin Fox-Pappas, who had a team-best .444 on-base percentage in the playoffs after struggling with injuries earlier in the season.

The Cardinals’ first five hitters, though, reached base only twice in 20 plate appearances on the night. That included an 0-for-4 night by Jean, who still had a .429 / .679 batting slash and nine RBI in as many playoff games.

Hamilton stayed level at 2-2 into the fifth. Kandel, though, got Peters out of his groove with a two-out, broken-bat single that just cleared the range and reach of Jean, his shortstop counterpart. With Kandel getting get a great jump from first base on a run-and-hit play, Oakville native and London leadoff hitter Jakob Newton hit an RBI double to deep centrefield. That put London ahead to stay, and started the run where the Majors scored eight runs in a span of 19 batters.

An inning later, with Peters nearing the 100-pitch mark, a throwing error by Cardinals’ second baseman Laine Renaud and an ill-fated try by Jean to throw out London’s Starling Joseph at home plate fanned the flames of a London rally. One batter after Torrez entered in relief, Newton slapped a two-run single through the 5.5 hole between Jean and third baseman Jacob Underwood. That opened a 7-2 Majors lead.

Kandel was London’s fixer afield when Hamilton got three hits in a row in the bottom of the seventh to stir some hope. Underwood, the extra-inning hero in Hamilton’s series clincher in Guelph seven days earlier, hit a ball up the middle that had two-run single marked on it. Kandel went on to the outfield grass and threw out Underwood, saving at least one run.

Buoyed by that bailout behind him, Arias struck out Cardinals leadoff man Dennis Dei Baning for the third time to end the threat.

Underwood, a 22-year-old hometown rookie from Hamilton, was the team’s third-toughest out in the playoffs, getting on base at a .412 clip. That was nearly twice the rate of his .213 OBP in 22 regular-season games.

Overall, the seventh-seeded Cardinals went 4-5 in the playoffs while playing the Majors and Guelph Royals, the top two seeds. They went 3-0 in the starts of righthander Sam Turcotte, who had a team-best 3.18 ERA. That was a far cry from their fortunes against the top tier of the IBL in the regular season, when they had one win in 18 tries against Guelph, London and Welland.