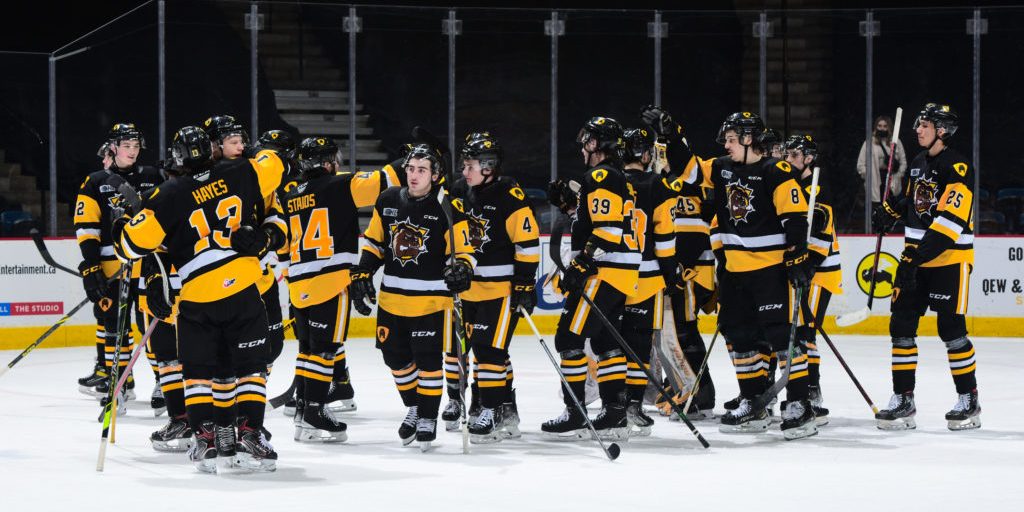 The Hamilton Bulldogs tied a franchise record Tuesday (Mar. 29) night. Avery Hayes had two goals and an assist for the Bulldogs as Hamilton wrapped up an eight-game road trip with a 6-2 win over the Petes in Peterborough.

With eight games remaining on their regular-season schedule, the Ontario Hockey League-leading Bulldogs tied the Hamilton OHL/OHA wins record at 43, joining the 2017-18 Bulldogs and 1975-76 Fincups. Both clubs went on to win the J. Ross Robertson Cup.

Lucas Moore, Gavin White, Jan Mysak, and Mason McTavish had the other goals for Hamilton (43-12-3-2).

Here's a second look at Hayes' second marker of the night! pic.twitter.com/MkTfZYR1Hk

Bulldogs goaltender Marco Costantini stopped 25 of 27 Peterborough shots after 40 minutes but was replaced by Matteo Drobac to start the third. Costantini was at the bottom of a pile in the second period during a goalmouth scramble. Drobac stopped all 12 shots he faced in the final 20 minutes.

With a win tonight in Peterborough, your Hamilton Bulldogs tie the 2017-18 Bulldogs and the 1975-76 Fincups for the most wins in Hamilton's OHL/OHA history! #DawgMentality pic.twitter.com/tKgcnU6mW0

Hamilton has a comfortable 11 point lead over the second-place Brampton Battalion in the Eastern Conference and a 9 point lead over the West-leading Windsor Spitfires. Securing the highest point total in the OHL would ensure home-ice advantage throughout the postseason.

Next for the Bulldogs is a home date with the Oshawa Generals at Hamilton’s FirstOntario Centre Thursday (Mar. 31) night. Puck drop is scheduled for just after 7 p.m.