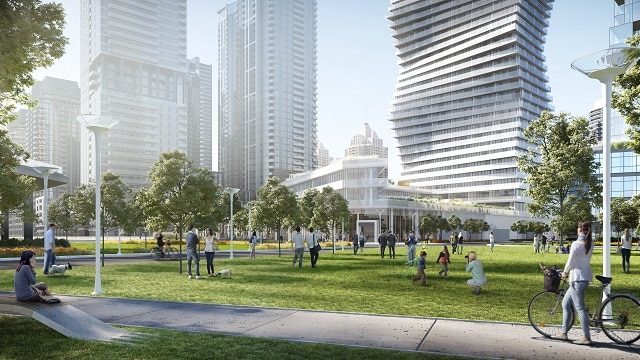 Residents living in downtown Mississauga should keep their eyes out for some brand new public artwork coming soon to M City Condominiums.

The master-planned community — currently being planned and developed in the area of Burnhamthorpe and Confederation Parkway — is wowing residents with its eight skyscraping towers, high-tech features, and soon, gorgeous public art that will bring life to M City’s public realm.

“Our stated goal at M City has always been to develop a world-class community,” said Rogers Telecommunications Limited Vice President and Treasurer, John Anderton, who says Rogers has an enduring history with the city of Mississauga.

“With the help of Urban Capital, our development team, and our colleagues at the City, we continue to work towards a community anchored by iconic design, public spaces and parkland. Today’s announcement brings us one step closer to that goal as we shift our focus towards animating the public realm.”

More information is expected soon on what artwork M City will be commissioning and when we can expect to see it brought to life.

“Public art is an important element of what makes Mississauga a vibrant, creative and innovative city,” Crombie said.

“We are fortunate to partner with innovative partners like Rogers and Urban Capital, who are helping us advance our city’s goal of being a hub for arts and culture.”

Another exciting initiative recently announced at M City is the commissioning of new windscreen installations, which will run the full length of the site along Burnhamthorpe.

Canadian artist Ed Pien was selected to design the windscreens through an invitational art and design competition led by the City’s Public Art Program. An artist for over 30 years, Pien’s work has been shown and collected widely on a national and international scale. The final design for the windscreens is set to be revealed early next year.

Those who have been keeping up with M City’s development know just how impressive the hotly anticipated community is shaping up to be, both in size and scope.

When complete, M City Condos will boast a size of 4.3 million square feet, 6,000 residential units, a range of retail and commercial office space, and a total of eight iconic buildings — including the four tallest towers in Mississauga. Construction is already underway for the first three towers.

The fourth tower, M4, will be one of the most technologically advanced condo buildings in all of Canada, with a smartphone-centric living experience that puts convenient, high-tech features at each resident’s fingertips. M4 launched for sales earlier this spring.

The new condominium community is designed to bring work, transit, shopping and people together with its spectacular buildings, green spaces, superlative amenities, and now its upcoming public art.

“A lot of effort has gone into establishing Mississauga’s downtown core. With the Absolute Towers serving as an identifiable eastern gateway, followed by a collection of great public spaces like Celebration Square, Civic Centre and the Living Arts Centre, our opportunity with M City has always been to define the western edge of downtown,” said Mark Reeve, Partner, Urban Capital Property Group.

“That was our goal as we planned a walkable mixed-use community that emphasizes the public realm. In a year where the importance of outdoor space has never been more apparent, we’re excited to be contributing to the beautification of future parkland in the community.”