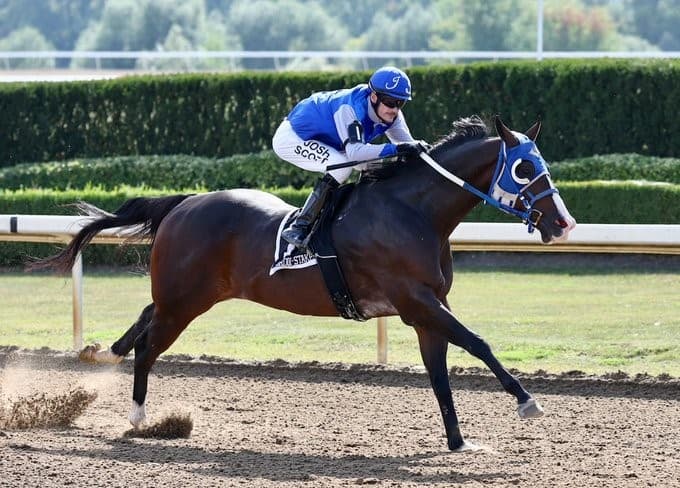 With an electrifying burst of speed, Ontario Bred Had To Be Ivory powered to a track-record setting victory in the $21,190 QROOI Distance Series #2 at Ajax Downs on Wednesday to remain undefeated in 2022.

The 7-year-old son of Ivory James – Had to Be Fandango, bred and owned by Carol and Jaime Robertson of Hillsburgh, solidified his position as the best Quarter Horse in the country with a one-length score in the 440-yard dash in a time of 21.410, besting the former record of 21.520 set by Mitford in 2013. His final time speed index of 112 is one of the highest marks in recent Ajax Downs history.

Trained by Bryn Robertson and ridden by Josh Scott, Had to Be Ivory broke sharply from post position one and was immediately challenged by the 4-year-old filly Streakinlilwagon, one of five horses entered in the race by Ajax Downs’ leading trainer Jason Pascoe. But in a few strides, had to Be Ivory sped clear of the Pascoe runners and sped to his record-setting victory. Streakinlilwagon finished second, half a length clear of the multiple stakes-winning 3-year-old filly Eye Live for Candy.

“I’m never really concerned about much with this horse, his record speaks for itself,” said Scott. “When we broke, it was good, I was happy with it. When I asked him to run, he took off and it was all over from there.”

The Distance series #2 win was the 21st victory from 27 career starts for Had to Be Ivory, who was the 2019 Ajax Downs Horse of the Year.

“He’s never won at 440-yards so there was some doubt,” said Bryn Robertson. “Something always went wrong the first couple of times he tried the distance. But today, they weren’t going to beat him.”