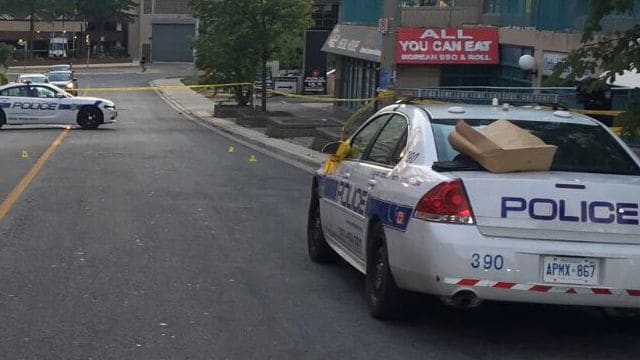 Violent crime rocked Mississauga last night with two separate incidents happening within a few hours of each other.

A Rabba store near Hurontario Street and Kingsbridge Garden Circle was robbed at around 12:30 a.m., CP24 reports.

Police are investigating the incident and say the suspect used an unknown weapon during the robbery. Although paramedics were called to the scene, no one was seriously injured.

The suspect is described as a five-foot-seven black man with a medium build. He was seen wearing dark clothing: a black mask, black pants, black running shoes, and black nylon windbreaker with a hoodie.

Police are warning citizens not to approach the suspect if they see him, as he may still be armed. Instead, contact police immediately.

Unfortunately, another incident that happened a few hours later did result in someone getting seriously hurt.

A shooting took place around 3 a.m. outside a bar on Enfield Place, in the area of Hurontario Street and Burnhamthorpe Road, according to another CP24 article.

The victim, a man in his 30s, was shot in the chest and taken to the hospital. His injuries are serious but not life-threatening.

Police are again appealing to the public for help, particularly any witnesses who were in the area at the time. Security camera footage is also being looked at.

While a description of the suspect is not yet available, police are looking for a silver Mercedes-type sedan that was seen leaving the area.