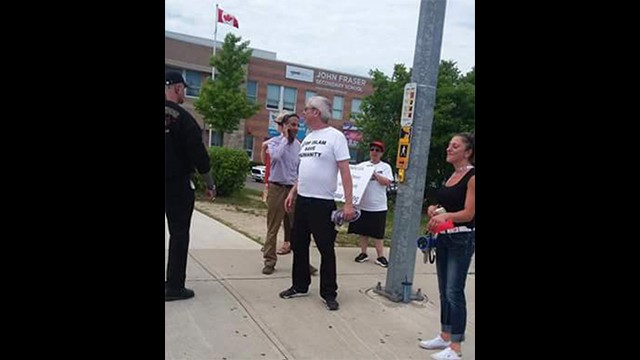 There are a number of things one might expect to see on route to a local high school and an Islamophobic protest probably isn’t one of them.

Recently, resident Maaham Malik took to Facebook to express shock and outrage over an Islamophobic protest that took place in front of John Fraser Secondary School in Mississauga.

On Friday, June 16, Malik wrote that she came across the protest–which, according to a recently posted YouTube video, was organized by a private citizen and filmed by nationalist group Rise Canada–while picking her 15-year-old brother up from school.

“My blood is boiling. I am an American born – Canadian citizen who is Muslim, living in Canada. I just picked up my 15 year old younger brother from his high school in Mississauga, ON and a protest of people screaming racial slurs and chanting islamophobic things to YOUNG students is happening right outside his school (John Fraser Secondary School) right now.”

According to a video uploaded to YouTube on Sunday, June 18, the protest was organized by Paul Marker and filmed by Rise Canada, a group of anti-Muslim agitators that has called for bans on Muslim immigrants.

Anti-Muslim groups have been active in Peel for some time, disrupting Peel District School Board (PDSB) meetings and heckling elected officials due to a long-standing PDSB policy that allows Muslim students space and time to pray during school hours. While religious freedom policies have been in place at Ontario public schools for well over 10 years, the school board recently abandoned a policy that would limit Muslim students to a choice of sermons preselected by school officials.

This change has provided Islamophobic groups with endless ammunition to spew hysteria at public events.

“Peel School Board allows Islamic prayers within schools; John Fraser High School is an epicenter with a large Muslim Student Association,” Rise Canada wrote on YouTube. “A citizen Paul Marker organized a wonderful multi cultural protest in front of the school, with featured speakers…wearing T shirts saying ‘Stop Islam Save Humanity’, the speakers spoke of Islam and its pedophilia, rape culture, violence and barbarity. Unfortunately, some of the Muslim students expressed great hostility and violence against this peaceful message to protect children.

Rise Canada said the protest was attended by an ex Muslim and two non-Muslim speakers from Pakistan.

“I am so appalled. I attended this high school a few years ago, and I have lived here for more than 20 years, yet someone had the audacity to scream ‘Go back to your country’ at my mother right in front of my eyes,” wrote Malik, before going on to ask what has happened to our “peaceful society?”

While the protest is concerning primarily because of its location (right outside a high school with Muslim students), it’s not surprising. Mississauga Mayor Bonnie Crombie has reiterated her and the city’s support for a diverse community and Brampton Mayor Linda Jeffrey recently released a statement condemning the spread of fear and misinformation in the wake of the PDSB controversy.

The school board has also had to enhance security at meetings.

“How can this group of people be allowed to target individuals right outside a school? I have never felt so isolated in my own country,” Malik wrote.